Time isn't wasted when you're getting wasted 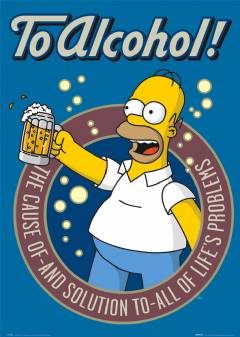 Sports and booze go together like Finkel and Einhorn. Or was it Einhorn and Finkel?

What’s not to celebrate these days? Cavs are dominating the Eastern Conference Playoffs in a dominating fashion, Mike Brown was voted Coach of the Year, and Akron’s own is the MVP of the NBA. Hey Bartender, line ‘em up!

The question is, to celebrate such a season, where does one turn to when they want a signature shot to mark such a signature occasion? If you’re from Cleveland, and you have something to celebrate, you know to celebrate it FAST, because it won’t last. Isn’t that right, Mr. Mesa?

What’s faster than shooting 1.5oz of liquor into your system and giving a high five to anyone and everyone within a 6 foot radius?

After spending hours scouring the internet for a perfect Cleveland Cavaliers shot, we stumbled upon one that stood out — The LeBomb James. (Turns out it's been around for awhile and we just never knew about it, which made us suspect that there are others like us out there — pining for a Cleveland-based alcoholic shockwave of liquid joy but too lazy to really look around.)

There are a few variations of the ‘Bomb out there, so we thought we’d be nice to give you a few, so you can take your next Cavs victory to the next level. We do recommend using only top shelf liquor. Remember; get that weak stuff outta here! (DRINK!)

This drink is named after LeBron James. Sprite is his sponsor, Crown Royal because he is the king, grenadine for the wine, and pinnaple juice for the gold.

Our thoughts on this one: Based on the way this was entered into Cocktailmaking.co we are assuming the submitter had already done a few ‘Bombs. A few with the 2 shots of Crown, for heaver drinkers.

Variation two: The 'LeBomb James': drop a shot of Crown Royal in Red Bull, chug it. Dump 3 packs of Splenda in your hands, throw in the air like LBJ

Our thoughts on this one: Nothing gets you more amped for a game of hoops than good whiskey dropped into liquid sugar.

We aren’t sure what’s worse: The crash from the sugar buzz or the crash onto the pavement when the bar kicks you out for throwing Splenda on everyone. We’ll let you know.

1 shot of crown royal (cause he's the king)
2. 1 shot of captain morgans pinnaple rum (for the gold)
3. Fill glass with sprite (it's his sponsor); I guess this would work this his powerade as well (but i've never tried it with powerade)
4. Some Grenadine- for the wine (drinkers choice on how much)
5. Stir
6. Drink everytime LeBron does something good or at leasure [sic] during the offseason.

Our thoughts on this one: We are starting to wonder why nobody can spell the word pineapple? It’s just pine + apple, come on Cavs fans. You’re better than that. That being said, this one is creative in that it can either be a shot or a mixed drink. If you’re from Cleveland, you wouldn’t be caught dead having a sipper during a sporting event, bottoms up!

The following was submitted by one of the “original six” gym rats, Double B, who has a cocktail idea for those watching the 2009 Playoffs.


“…have yourself a ‘LeBomb James’: shot of Crown Royal (for King James), some Red Bull and three packs of Splenda. Drop the shot of Crown in the Red Bull, chug it, dump Splenda in your hands, and ‘baby powder throw’ it into the air like LBJ….

Our thoughts on this one: Only someone out of New York would recommend throwing three packs of sugar in the air during a basketball game. Only Stephon Marbury would so something that stupid.