Be There — The games will be on TV, but the revolution will not be televised 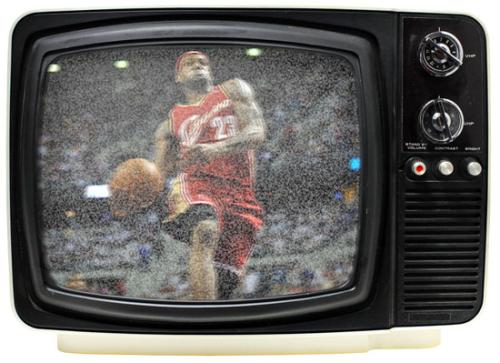 Beg, borrow or steal. Scan eBay, Craigslist and StubHub. Bribe a friend, ditch the significant other for a night, lay a guilt trip on a wealthy relative. Dig into the vacation fund, take the bus for a week, pack your lunch. Basically, do anything and everything short of not paying the mortgage to get to a Cavs game.

Think back for a moment — it's depressing, I know — to all the Browns, Indians and Cavs games you've been to. The rainy April nights at the Jake when the Indians were off to yet another disastrous start. The cold nights in September when the Indians were long since eliminated from the playoffs, putting the final touches on yet another embarrassing finish with a bunch of guys named Selby and Tyner on the field.

The empty stadium swept by sideways sleet, with fourth-string quarterbacks, has-beens and never-gonna-be's on the field. Another Steelers loss. Another losing season. About 18 quarterbacks. PSLs. Season tickets down the drain.

And you know the rest, because you were there or you watched it — and God knows we've all talked about it.

Which is why you deserve this. Not to see a game in a bar or with friends, which is nice enough, but to be there for the party. Whether it's Orlando or Boston in the next round, the games likely won't end with the same ease and dominance that led everyone to declare home games as celebrations to this point. But that just means the energy doesn't end at halftime, and there's something to pay attention to in the second half besides organizing a "Wally, Wally" chant.

Consider it an appointment with a sports psychologist — if the psychologist also invited 20,561 of your closest friends and had fire shooting out of his desk.

In every post-game interview, and even in a rap song or two, the Wine and Gold have given credit to the fans, and deservedly so. The Q isn't one of the most intimidating places in the NBA for nothing. That home court advantage is huge, and in some respects, the players need you.

But you need them too. The Cavs have played four playoff home games so far en route to routing the Pistons and Hawks. They have between four and eight home games between now and the end of the season — the end of the promise, the hopeful attainment of that one goal. And trust me, you want to be there.

It's cathartic. It's healthy to wake up the next day, head still spinning, throat still sore, hands still raw. It's amazing what this team can erase.

Consider last Thursday night in game two against Atlanta, a date which was also the 20th anniversary of "The Shot." Consider for a moment not only the overall joy of watching your team absolutely demolish the Hawks, but the awe-inspiring performance of LeBron James in compiling yet another highlights reel for the NBA to use in their "Where Amazing Happens" campaign: the fade-away three pointer at the buzzer. The no-look alley-oop from Mo. The no-look pass to Anderson through the guts of the Hawks defense.

There's a feeling you can't get from watching the game on TV. You can't feel yourself impulsively rise to your feet — one of more than 20,000 in unison — as LeBron swings his arms playfully after draining a jump shot from about a mile away. You can't let a wave of energy rush over you as the pre-game introductions crescendo from the minute the lights are turned out to the minute they're turned back on, revealing a group of friends going through about 15 handshake routines.

You want to wait in anticipation as the lineup is announced and LeBron hunches on the bench, enjoying those last final seconds before his name is called and the crowd erupts. You want to watch the rest of the team squeeze together in a line and look toward LeBron, who then waves his arms as if he parting the Red Sea, shuffling his teammates back to each side and revealing a tunnel of soldiers who wait for his salute.

You want to be there for that. Because whether it's only another four home games or as many as eight, that's it. Season over, magical ride done. And if something's going to happen that only the oldest of Cleveland sports fans can remember, but most of us have never seen, you actually want to be there to see it.