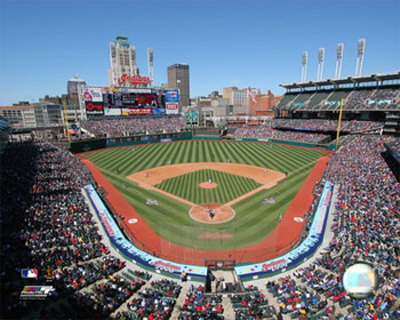 Lunch and three innings. It has a certain ring to it, and we have to admit, this marketing by the Tribe to the downtown worker who wants to catch part of a day game during his/her lunch break is quite brilliant and quite enticing.

Turns out, it doesn't always work perfectly though. We got this email from a concerned fan who went through quite an ordeal, which ended in no lunch and no baseball.

Three of us went. We bought tickets for $15 per. The ticket has $10 on it that you can use for lunch. - hence you essentially get a ticket for $5.

We were not told and nowhere is it in the literature (email I received from the Indians) that you have to wait 15 minutes for the ticket to be active so that you can actually buy food. We found that out the hard way as we waited in line, ordered and then had the tickets rejected. So we were not about to buy the food as we had these tickets. It was then that we were told that the tickets take a little while, like 15 minutes to become active. As we has just bought the tickets before walking in, we said ok.

We waited a few minutes, got in another line and tried again. Same deal. This time we had been in the ballpark for at least 40 minutes.

We then went to customer service. We were told that they had problems with the system and that if we waited a few minutes a supervisor would be by and would give us indians fun cash so we could buy lunch. 15 minutes later and no supervisor. We could not wait any longer as we only get an hour for lunch and we had already been gone that long. While waiting for the supervisor there were 4 other people who were having the same problem. These were just the folks I saw at the customer service window on the field level. I did give customer service my name and contact information.

When I got back to the office, as I ate the crackers in my desk, I sent customer service a very nice email letting them know what happened. The response was that they were sorry and working out the kinks. I sent a response letting the Indians know I think they are inept, and their response did not address the issue. Both of my co-workers sent emails as well. They have yet to get a response as far as I know.

I emailed Bob Dibiasio for a comment, and here's what he said:

When a person purchases a lunch and 3 innings at the window, there is a 15 minute period where the bar code is activated througout [sic] the ballpark. That may have been an issue, although they are told this at time of purchase. We had nearly 600 today without a problem. Please inform those who contacted you to call our customer service dept at 216 420 HITS for assistance.

Just a warning, I suppose, that if you plan on doing this in the future, maybe best to purchase your tickets in advance as to not deal with the delay.