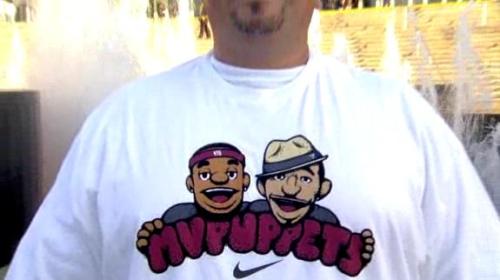 First, that shirt was captured during game six of TNT's broadcast of the Eastern Conference Finals. Not sure whether you can file it under the Bills Super Bowl Champions t-shirt category yet or not. A quick survey around the interwebs shows it's not for sale anywhere. Whether that means it might be in the future, might be included in some limited edition package, might have been a one-off design for a promotional piece, or whether there's truckloads of these shirts destined for some forlorn African town, I'm not sure.

Second, CNBC's Darren Rovell reports that Nike plans on continuing to air the MVPuppets ad campaign through the Finals even though LeBron will be sitting at home watching Kobe take on the Magic. Six versions have already aired, and according to the Nike spokesperson Rovell spoke to, Nike has MORE new ones they'll be rolling out as June rolls on.

I can't help but watch them and be utterly depressed now.