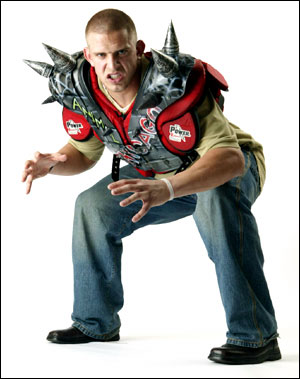 Columbus Magazine has a pretty extensive Q&A session with James Laurinaitis and Malcolm Jenkins. Lots of topics are covered. Most of them boring. That goes for the answers too — about 53% of the responses involve Jesus, the Bible, or Jesus and the Bible.

Couple of decent ones though, including a question about pre-game songs, to which Laurinaitis responds that "In the Air Tonight" got him pumped up.

Jenkins responds that it's a combo of music that gets him pumped up. First, the gospel. Then, the songs about guns.

What bands or songs did you listen to before games to get pumped up in college?
Laurinaitis: I usually listen to “In the Air Tonight” by Phil Collins.
Jenkins: The morning of, I would listen to all kinds of Gospel music. I wouldn’t listen to anything but about two hours of that. Then later on, I would listen to a lot of music about guns because we call ourselves the silver bullets.

You can read the rest of the interview yourself. One other bonus here, though — Jenkins' favorite restaurant in Columbus was Applebees. Boo.

Do you have a favorite restaurant in Columbus?
Laurinaitis: It’s between Hyde Park and Haiku.
Jenkins: Applebee’s.