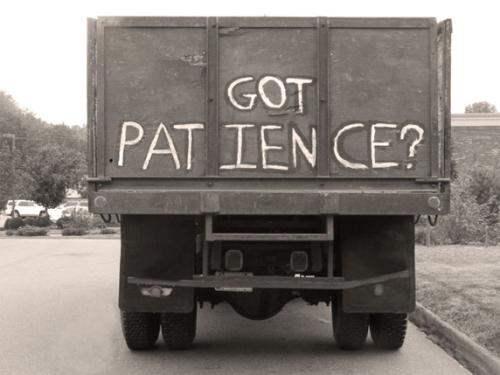 Patience is not a virtue that most sports fans possess in any measurable quantity, and this is infinitely and essentially true of Cleveland fans.

Tribe makes a trade? Call up the prospects right now. The guy’s only in A-ball? Doesn’t matter — he should be starting. He pitched badly in his first outing? Trade was a failure.
Brady looks bad in a game or two? Bring back Derek! Hell, start thinking about which quarterback you’re going to draft next year. LeBron's contract is up in 2010? Pour over every minute detail and quote you can find. Read the tea leaves, search for divine inspiration, speculate wildly, and if all else fails, punch a New Yorker in the nose, because if you make him bleed, LeBron's staying, natch.

While that attitude is not unique to the shores of Lake Erie — it’s fueled talk radio across this great blabbering nation for decades — the Forest City does have a legitimate claim to the title of Least Patient Fanbase. Losing everything since 1964 will do that. Note that this has nothing to do with the support the fans give the team or the number of season tickets bought, items of merchandise purchased or hours spent obsessing over everything related to the team. This is about patience, not loyalty. A nice equation might help out: Number of Fans divided by Amount of Time Found Acceptable to Wait for a Winner multiplied by Losing Seasons equals Time Allowed Before Bitching Begins.

Naturally, the result of that equation is infinitesimally small for Browns fans, which you would know — even if you weren’t familiar with my handy equation — by gauging the reaction of fans after week one’s loss to the Vikings. I get it — we suck. I was thinking the same things you were and, yes, they all involved phrasings and vulgarities that would fetch me a libel suit in 30 seconds should they make their way into print. It’s the same concerns. Same story.

In fact, assuming you’re not at the Browns games every week, or don’t watch them on TV, and are searching for news on the Orange and Brown, look no further than the game stories filed by reporters last year. Just go back to the 2008 archives and dig out any random story of a loss. Hell, I can save you some time by condensing the game story here. Refer to it every Monday morning and you’ll be caught up. And depressed.

The Browns looked tough in the first quarter against their opponent, but old problems resurfaced quickly as the game went on. The offense once again struggled to find the end zone, and due to some misfires from the quarterback, a few drops from the receivers and a spotty run game, the Browns settled for field goals all afternoon.

“We have to eliminate the mistakes and play better for the whole game,” said the coach.

One bright spot on the day was the play of Josh Cribbs, who returned a kick for the only touchdown for the Browns.

The defense, which started strong, faltered later in the game, understandable since they were on the field for 75 percent of the snaps.

There, I just did Tony Grossi’s job for the rest of the season in four paragraphs.

Where were we? Right: patience.

It’s hard to wait when you’re forced to watch Brady Quinn throwing passes with all the accuracy of a crazy old cat lady heaving her brood out the window of her burning apartment. Browns Fan might say that he understands that the team needs not only a complete change of culture after the disastrous reign of Romeo and Savage, but also a good number of talented difference-makers on both offense and defense. Browns Fan is probably even telling the truth when he says that he knows change isn’t going to be immediate, that contention is a ways down the road, and that Mangini and company deserve some time before judgment and wrath are laid at their feet.

It’s just that I think Browns Fan figured all tangible improvement would be decipherable in the first five minutes of the first game. Maybe the first 10, if he was feeling generous. The fact that the first half featured many of these supposed strides forward was a good thing. The fact that they all disappeared in a flurry of very familiar gaffes in the second was not. Patience gone. Cue the anger.

I’m done thinking about improvements. It’s moral victories from here on out, since victories of the real kind will be few and far between. Anyone who thought that this would be anything better than a six-win team is off his or her rocker. A team that could put up more than six offensive touchdowns in an entire season is a different story. If it’s the same story as last year, the patience quotient for next year is going to be zero.