Things To Read That Might Not Suck: Mostly Frowns Edition 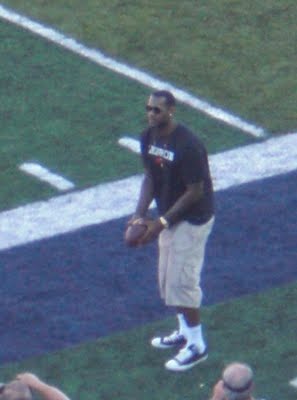 Other people write words too, ya know. Sometimes I like to show you where those words were written.


The department routinely puts extra patrols on the street for events like Browns games. But this weekend they are taking it further.

"We're treating it like a playoff game," he said.

The Browns intend to wear brown pants and white jerseys on the road all season.

Mangini said he decided on the radical look because he thought it looked good "and the guys felt the same way." Players also find the brown pants more comfortable and less restrictive because of the absence of a stripe down the legs.

if Dwayne Rudd could be reached for comment, I'm positive he'd say something like, "They should also play without helmets, it's less restrictive that way."

— If you're wondering where that LeBron photo up top came from head on over to this Cleveland Frowns post. Frownie and I spent Saturday at the new Infocision Stadium in Akron for the Zips/Hoosiers game. He's got a full photo gallery of the fans, and, yes, a pic of LeBron, who showed up and was hanging out on the Zips' sideline. (Cleveland Frowns)

— If you've paid any attention to the NL this year, you know that the Dodgers have acquired enough former Wahoos to be considered Indians West. The Dugout over at Fanhouse does what they do with the former Clevelanders. My favorite: Colon's screenname — BartoloCaribbeanCool. (Fanhouse)

— PD Buckeye beat reporter and AP Poll voter Doug Lesmerises has rankled some with his first three polls of the season. Florida out of the top spot? Miami number two? USC at 25? OSU at 24? WTF? Bowling Green ranked third? (OK, I made that last one up.)

To be fair, Doug's got a logic to his madness and he's explained it a couple of times. Ignore preseason perceptions, go off the games, drop teams like mad if you think they deserve it. Check out his ballot at Pollspeak (notice the incredible number of "Extreme" votes, meaning he's got a team ranked either highest or lowest among all voters, and then notice how many people thought he was a "good" voter and how many people thought he was a "bad" voter — they're about equal). Then read The Sporting Blog's take. (Sporting Blog)

— Scott over at WFNY breaks down why Josh Cribbs might have done damage to his campaign to get a new contract with his Week 2 performance. We thought the same thing yesterday. Seems everyone's all over Cribbs today, and while that's fair, the onus is on Mangini to get him out of the No. 2 receiver spot and back on the cover teams where he belongs. If coach wants to trot Cribbs out as the third or fourth receiver every once in awhile, or continue to use the Wildcat package, that's fine. But Robiskie or Massaquoi needs to be starting and getting the reps from now on. (Waiting for Next Year)

Jump to comments (0)
Tweet
Email
Print
Share
« Is That A Clipboard in Your Pocket…  |  Swag Alert: Metcalf Up the Middle S… »