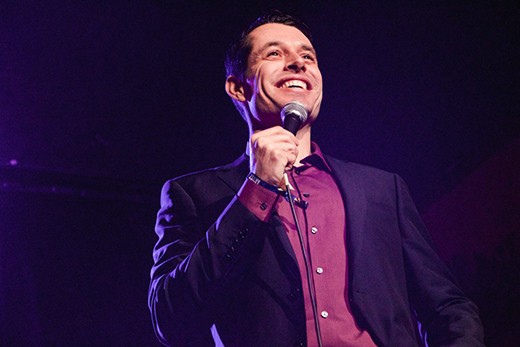 Hilarities.com
Nate Craig.
Our weekly picks of the best things to do in Cleveland this weekend. Also check out our full Cleveland event calendar.

THU 04/21
Nate Craig
Famous for playing Phil in the Netflix series Maniac, comedian Nate Craig also starred on TruTV's World's Dumbest. He was also recently featured on Season 2 of Comedy Central's Roast Battle. Craig likes to joke about the fact that he supports abortion because he's paid for one and that if men could get pregnant, they'd be having abortions at a rapid rate. He performs at 7 tonight and at 7 and 9:30 tomorrow night at Hilarities.
2035 East Fourth St., 216-241-7425, pickwickandfrolic.com.

Bad Boys of Blues
This weekly jam night at Brothers Lounge returns after a two-year hiatus caused by the pandemic. Expect some of the city's best players to sit in with guitarist Michael Bay and Co. It all starts at 8 p.m., and admission is free.
11609 Detroit Ave., 216-226-2767, brotherslounge.com.

Guardians vs. Chicago White Sox
The Guardians wrap up their homestand with a game against division rivals the Chicago White Sox today at Progressive Field. Weather permitting, first pitch is at 1:10 p.m. The White Sox made the playoffs last year and stand to be competitive again this year, so this series should provide a good early test for the Guardians. Check the team's website for more info.
2401 Ontario St., 216-420-4487, clevelandindians.com.

FRI 04/22
Big Thief
Indie rockers Big Thief roll into town tonight in support of their latest record, Dragon New Warm Mountain I Believe In You, which came out earlier this year via 4AD. A sprawling double LP, Dragon New Warm Mountain I Believe in You features “a rambling account of [the band’s] growth as individuals, musicians, and chosen family over four distinct recording sessions,” as it’s put in a press release. The band took five months to record the album and came out with 45 completed songs that it then whittled down to the 20 tracks on the album. Doors open tonight at 7 at the Agora. Check the club's website for more info.
5000 Euclid Ave., 216-881-2221, agoracleveland.com.

Lewis Black
Comedian Lewis Black regularly touches on current events, social media, politics and anything else that "exposes the hypocrisy and madness in the world," as he puts it. Given the state of international affairs these days, Black's analysis of the "hypocrisy and madness in the world" seems all the more relevant. The comedian brings his Off the Rails tour to the Goodyear Theatre tonight at 8. Check the venue's website for more info.
1201 East Market St., Akron, goodyeartheater.com.

Morris Day and the Time with Special Guest the Dazz Band
Fun/R&B acts Morris Day and the Time and the Dazz Band come to MGM Northfield Park — Center Stage tonight at 8 for a concert that serves as a make-up date a show that was originally slated to take place earlier this year. The concert begins at 8. Check the venue website for more info.
10705 Northfield Rd., Northfield, 330-908-7793, mgmnorthfieldpark.mgmresorts.com/en.html.

Adele Givens
Known as the “Queen of Comedy,” Adele Givens uses her crass sense of humor to focus on every day situations such as going to the gynecologist, marriage and baby naming. She uses her sense of humor to joke about topics such as double standards. She performs tonight at 7:30 and 10 at the Improv, where she has shows scheduled through Sunday. Check the venue website for more info.
1148 Main Ave., 216-696-IMPROV, clevelandimprov.com.

Magic Night: George Tait
The local vaudeville group Pinch and Squeal will host this event featuring the music of comedic pianist Sweet Keith and the magic of Detroit-based magician George Tait. Tait has authored several books on conjuring as well as a fantasy horror story titled How to Kill a Piano. He's also reportedly authored over a dozen trade publications under a secret nom de plume. The performance takes place at 8 tonight at the Wizbang Theatre in Cleveland Heights. Consult the website for more info.
2134 Lee Rd., Cleveland Heights, 216-534-9482, wizbangtheatre.com.

M.O.O.K.Y/Hallie/Y.A.Y.A./Honeyland
A singer/songwriter/producer born in Akron, M.O.O.K.Y., who headlines the Beachland Ballroom tonight, cites Mac Miller, Prince, and Jeff Buckley as influences. After a stint in New York, he came back to Northeast Ohio last year and is currently making progress on his second studio album. Doors open at 7. Consult the Beachland website for more info.
15711 Waterloo Rd., 216-383-1124, beachlandballroom.com.

An Officer and a Gentleman
Based on the Oscar-winning film, An Officer and a Gentleman turns the movie's love story into a music featuring all your favorite '80s hits. Tonight's performance takes place at 8 at Connor Palace, where performances continue through Sunday. Check the Playhouse Square website for more info.
1615 Euclid Ave., 216-241-6000, playhousesquare.org.

SAT 04/23
Cocktail Tasting and Book Signing with Tim Harnett
Tiki Underground's Tim Harnett's No Beard or Bowtie Required: Cocktails for the Craft-Curious offers an overview of the mixologist's favorite drinks. Today at 5 p.m. at Visible Voice Books, Harnett will discuss the book and sign copies of it as well.
2258 Professor Ave., 216-961-0084, visiblevoicebooks.com.

Happy Cole
High-energy comedian Happy Cole delivers jokes at a fast pace. His humor is about the things that he observes going on in the world around him. His material ranges from racial humor to joking about cruise ships. Cole has been in the comedy game for 20-plus years, and that experience shows: He knows how to work a crowd and how to make them laugh. He performs tonight at 7 and 9:30 at Hilarities. Check the club's website for more info.
2035 East Fourth St., 216-241-7425, pickwickandfrolic.com.

Mastodon and Opeth
On tour in support of its new album, Hushed and Grim, the heavy metal act Mastodon rolls into town tonight to play the Agora with co-headliners Opeth. Hushed and Grim draws from classic rock, psychedelia, punk, metal, alternative and also serves as a tribute to friend, confidant and longtime manager Nick John, who tragically passed away from pancreatic cancer in September 2018. The concert begins at 7. Consult the venue's website for more info.
5000 Euclid Ave., 216-881-2221, agoracleveland.com.

SUN 04/24
Jokes on You
Inspired by crowd work clinicians like Dave Attell, Ian Bagg, and Big Jay Oakerson, Jokes On You makes the audience the center of the show by "pushing comics to avoid prepared material or written jokes and instead focus on organic interaction with the audience," as it's put in a press release about this event, which takes place tonight at 7 at Hilarities. John Bruton and Bill Squire host the event. Last Sunday of every month.
2035 East Fourth St., 216-241-7425, pickwickandfrolic.com.

Monsters vs. Rochester Americans
As their regular season starts to come to a conclusion, the Monsters take on the Rochester Americans today at 3 p.m. at Rocket Mortgage FieldHouse. It's Monsters Family Day, and there will be special giveaways. Check the arena website for more info.
1 Center Court, 216-420-2000, rocketmortgagefieldhouse.com.

Stephane Wrembel
One of the most highly regarded guitarists in the world, Stephane Wrembel specializes in the style of composer/guitarist Django Reinhardt. Gypsies at campsites in the French countryside even taught him how to play. Wrembel released his latest album, The Django Experiment VI, last year, so you can expect to hear tracks from it at tonight's shows, which take place at 6 and 8 p.m. at the Bop Stop. Check the venue website for more info.
2920 Detroit Ave., 216-771-6551, themusicsettlement.org.