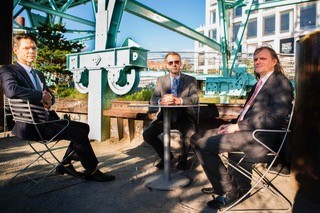 Kimmy Toledo
Mostly Other People Do the Killing.
Our weekly picks of the best things to do in Cleveland this weekend. Also check out our full Cleveland event calendar.

THU 02/24
Mostly Other People Do the Killing
The jazz trio Mostly Other People Do the Killing swings into the Bop Stop tonight for a concert that celebrate its new album, Disasters Vol. 1. Each composition on the album is named after a small town in Pennsylvania that experienced disasters ranging from floods and fires to mining accidents. The disasters serve as cautionary tales and represent examples of how people measure risk and reward. The concert begins at 7. Check the venue website for more info.
2920 Detroit Ave., 216-771-6551, themusicsettlement.org.

Jay Larson
In a bit called "Wrong Number," comedian Jay Larson jokes about taking a phone call from a stranger and pretending to be a guy named Bruce who's screwed up a company's budget. Larson, who's appeared on both This American Life and Comedy Central, has also released several comedy albums and hosts the weekly podcast, The CrabFeast. He performs tonight at 7 at Hilarities, where he has shows scheduled through Saturday.
2035 East Fourth St., 216-241-7425, pickwickandfrolic.com.

Mitsuko Uchida Returns
Pianist Mitsuko Uchida joins the Cleveland Orchestra to perform Schoenberg’s Piano Concerto, one of the most important works that came out of his time in America. The concert begins tonight at 7:30 at Mandel Concert Hall, where concerts also take place tomorrow and Saturday. Consult the Cleveland Orchestra website for more info.
11001 Euclid Ave., 216-231-1111, clevelandorchestra.com.

Selma
To help celebrate Black History Month, Cleveland Cinemas will present three critically acclaimed films. All films will be shown at the Apollo Theatre, Capitol Theatre, Cedar Lee Theatre and Chagrin Cinemas. At 7 tonight and at 1 p.m. on Sunday, the theaters will screen Selma, a dramatic account of how Dr. Martin Luther King Jr. (David Oyelowo) and his followers made an epic march from Selma to Montgomery to convince President Lyndon Johnson to sign the Voting Rights Act of 1965. Tickets cost $5.
clevelandcinemas.com.

She Loves Me
Based on the 1940 classic Jimmy Stewart-Margaret Sullivan film The Shop Around the Corner and the 1989 Tom Hanks/Meg Ryan movie, You’ve Got Mail, this CSU Department of Theatre & Dance's production has a book by Joe Masteroff, lyrics by Sheldon Harnick and music by Jerry Bock. Tonight's perform takes place at 7:30 at the Helen, where performances continue through Sunday. Tickets cost $15.
1407 Euclid Ave, 216-241-6000, playhousesquare.org.

Short. Sweet. Film Fest
The Short. Sweet. Film Fest gets into high gear tonight at the Metropolitan at the 9. A Student Filmmakers’ Night starts at 6 p.m. Student films will show from 7 to 10:30 p.m., followed by a Q & A with filmmakers and a student filmmaker's networking/social event. All in all, some 150 short films will be featured at the event. It runs through Sunday. Consult the website for more info and a complete schedule.
2017 East 9th St., 216-239-1200, shortsweetfilmfest.com.

FRI 02/25
Desi Banks
After hitting the road in 2018 with fellow comic B. Simone in 2018, Desi Banks became a headlining act and now regularly sells out comedy clubs and small theaters alike. He even performed at arenas on the In Real Life Comedy Tour alongside Mike Epps, Kountry Wayne, and Lavell Crawford.. Tonight's performances begin at 7:30 and 10 at the Improv, where performances continue through Sunday. Consult the venue's website for ticket prices and more info.
1148 Main Ave., 216-696-IMPROV, clevelandimprov.com.

Monsters vs. Lehigh Valley Phantoms
The Monsters take on the Lehigh Valley Phantoms tonight at 7 at Rocket Mortgage FieldHouse. Since it's a Friday night, the team offers a special promotion. There will be $1 Pepsi products, $2 hot dogs and $3 select beer specials. The two teams face each other again at 1 p.m. tomorrow at the arena. Check the Rocket Mortgage FieldHouse website for more info.
One Center Court, 216-420-2000, rocketmortgagefieldhouse.com.

SAT 02/26
Animaniacs Live
Tonight at the Agora, Rob Paulsen, one of Hollywood’s busiest, most talented and most passionate performers who specializes in the art of voice acting, hosts Animaniacs in Concert!, a celebration of animation, music, and comedy where the show’s best-loved songs (by composer and fellow “Animaniacs in Concert!” performer Randy Rogel) are performed alongside the cartoons. Doors open at 7 p.m. Check the venue website for more info.
5000 Euclid Ave. 216-881-2221, agoracleveland.com.

Brite Winter
Indie rockers Colony House lead the list of bands slated to perform at this annual art and music festival that returns after the pandemic cancelled last year's event. It all goes down starting at 3 p.m. on the West Bank of the Flats. Tickets start at $5. Find more info on the website.
britewinter.com.

Cavaliers v. Washington Wizards
Led by sharp shooting guard Bradley Beal, the Washington Wizards got off to a hot start this season and beat the Cavs in a close game at Rocket Mortgage FieldHouse last year. Since Beal went down with an injury, the Wizards have faded. They return to the arena tonight at 8 to take on the Cavs once again. Find more info on the Rocket Mortgage FieldHouse website.
One Center Court, 216-420-2000, rocketmortgagefieldhouse.com.

Cleveland Auto Show
Featuring concept, pre-production and production vehicles from many of the world's top auto manufacturers, the Cleveland Auto Show returns to the I-X Center. The massive event occupies nearly 1.2-million square feet and features exhibits, vehicle giveaways and a classic car competition. Today's hours are 5 to 10 p.m., and the show continues through March 6. Consult the website for a complete schedule and for ticket prices. Parking is free.
1 I-X Center Drive, ixcenter.com.

Kurentovanje
Kurentovanje (koo-rahn-toh-VAHN-yay) is evidently the most popular carnival event in Slovenia. The central figure of the carnival, the Kurent, is believed to chase away winter and usher in spring with its supernatural powers. The Kurent, by the way, is like something freakish and mammalian out of Parade the Circle: a massive sheepskin creature with bells and beads and all sorts of birdlike, pagan-inspired ornamentation. The Slovenian National Home, St. Clair Superior Development Corp. and Sterle’s Country House partnered with local businesses and institutions to bring a piece of this cultural event to the St. Clair Avenue neighborhood. Today's event starts at 9 a.m. at East 64th St. and St. Clair Ave. It runs until 6 p.m. It's free. clevelandkurentovanje.com.

Jokes on You
Inspired by crowd work clinicians like Dave Attell, Ian Bagg, and Big Jay Oakerson, Jokes On You makes the audience the center of the show by "pushing comics to avoid prepared material or written jokes and instead focus on organic interaction with the audience," as it's put in a press release about this event, which takes place tonight at 7 at Hilarities. John Bruton and Bill Squire host the event.
2035 East Fourth St., 216-241-7425, pickwickandfrolic.com.

Ashley McBryde
Singer-songwriter Ashley McBryde self-released a couple of albums before inking a major label deal for 2018’s Girl Going Nowhere. If that album represents what McBryde describes as “a snapshot of the time,” 2020's Never Will is a conscious attempt to crank up the guitars and emphasize the rock side of McBryde’s sound. Ashland Craft opens the show. Doors open at 7 p.m. at the Agora. Consult the venue website for more info.
5000 Euclid Ave., 216-881-2221, agoracleveland.com.

Pull Back the Curtain Speaker Series
Today at 3 p.m. at the Fairmount Center for the Arts, Liza Grossman, founder of Kaboom Collective, will talk about her career as part of the center's Pull Back the Curtain Speaker Series. Grossman works with Styx as tour conductor and has worked with popular artists including Jason Mraz, Melissa Etheridge, Kenny Loggins, Ben Folds, Graham Nash, Tommy Shaw, Jon Anderson, Pat Benatar, Bootsy Collins,and Jefferson Starship. She founded Contemporary Youth Orchestra where she served as Executive Director and Music Director for more than two decades. Admission is free, but reservations are requested.
8400 Fairmount Rd., Novelty, 440-338-3171, fairmountcenter.org.

Ready Set Coffee x Wrapitupshea Brunch
Today from 11 a.m. to 2 p.m., Ready Set Coffee, a Gordon Square coffee bar, will host a special brunch with Chef Simmons, a Cleveland native with a passion for serving up vegan dishes. The first course will be served at 11:15 a.m. Tickets for this event are $50 per person, which includes the entire brunch and drinks (unlimited mimosas and drip coffee). Only 20 tickets will be sold. The menu includes items such as roasted red pepper zucchini fritters and strawberry bread French toast.
7306 Detroit Ave., Suite 101, eventbrite.com/e/ready-set-coffee-x-wrapitupshea-vegan-brunch-tickets-260488266417.

String Machine
Pittsburgh-based indie rockers String Machine celebrate the release of their new album, Hallelujah Hell Yeah, with tonight’s show at Mahall’s 20 Lanes in Lakewood. The lilting "Touring In January" came out last month, and it offers a glimpse of the band’s New Pornographers-like sound. Punch Drunk Tagalongs, Seth Hasan and Drag Daze will open the show. It all starts at 7.
13200 Madison Ave., Lakewood, 216-521-3280, mahalls20lanes.com.