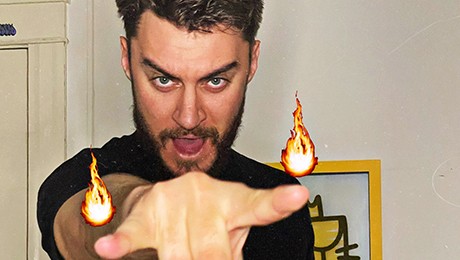 Hilarities.com
Casey Frey.
Our weekly picks of the best things to do in Cleveland this weekend. Also check out our full Cleveland event calendar.

THU 01/19
Casey Frey
This comedian has collaborated with musicians such as Donald Glover, Marshmello, Tiesto and DVBBS. When he's not touring as a standup comedian, he's developing projects for film and TV. He comes to Hilarities tonight at 7.
2035 East Fourth St., 216-241-7425, pickwickandfrolic.com.

Beetlejuice
Based on Tim Burton's beloved film, this musical tells the story of Lydia Deetz, a strange and unusual teenager whose whole life changes when she meets a recently deceased couple and a demon with a thing for stripes. Tonight's performance takes place at 7:30 at Connor Palace, where performances continue through Jan. 29.
1615 Euclid Ave., 216-241-6000, playhousesquare.org.

FRI 01/20
Cavaliers vs. Golden State Warriors
The Golden State Warriors come to Rocket Mortgage FieldHouse tonight at 7:30 for their first and only regular season against the Cavs in Cleveland. While the rivalry between the two teams has simmered some since the time when they'd meet on a regular basis in the NBA Finals, you can expect that Warriors guard Steph Curry will still get a cold reception from fans.
One Center Court, 216-420-2000, rocketmortgagefieldhouse.com.

Flanagan's Wake
No one knows grief and mourning like a Catholic, let alone an Irish Catholic. Now in its eighth year in Cleveland, Flanagan's Wake transports the audience to an Irish wake where villagers tell tales and sing songs for their dearly departed Flanagan. Finding the humor in life and death, the wake acts as a dark backdrop to an otherwise hilarious show in which alcohol fuels the humorous reminiscing. Sort of like a tragic Tony 'n' Tina's Wedding, the interactive and improvised show engages the entire audience as the guests are treated as the friends and family of the deceased. Tonight's show starts at 8 and repeats tomorrow night at 8 at Kennedy's Cabaret.
1501 Euclid Ave., 216-241-6000, playhousesquare.org.

Eddie Griffin
As an actor, Eddie Griffin has appeared in more than 50 films. Comedy Central calls him one of the Top 100 Standup Comedians of all time, and Griffin continues to film comedy specials. He brings his standup show to the Improv tonight and performs at 7:30 and 10. He also performs at the club at 6:30 and 9 tomorrow night. Tickets cost $40 to $55.
1148 Main Ave., 216-696-IMPROV, clevelandimprov.com.

Kurt Metzger
A writer for Chappelle’s Show as well as The Comedy Central Roast, comedian Kurt Metzger regularly performs at some of New York's most famous comedy clubs. He comes to Hilarities this weekend for shows that take place at 7 and 9:45 tonight and tomorrow night.
2035 East Fourth St., 216-241-7425, pickwickandfrolic.com.

Plastic Picnic
After this New York band first formed, it immediately wrote the Brit-pop-inspired "Nausea in Paradise," a tune that it released as a single and then included on its 2017 self-titled EP. The band has continuously released singles, and it makes its local debut tonight at 8 at the Beachland Tavern. Tickets cost $15.
15711 Waterloo Rd., 216-383-1124, beachlandballroom.com.

SAT 01/21
Cavaliers vs. Milwaukee Bucks
The Milwaukee Bucks got off to a hot start this season and look to be on the best teams in the NBA's Eastern Conference when their star center is healthy. They play the Cavs tonight at 7:30 at Rocket Mortgage FieldHouse. Expect this game to be a tight one.
One Center Court, 216-420-2000, rocketmortgagefieldhouse.com.

CFA All Breed Cat Show
In a city where dogs seem to get all of the attention, cat people will finally have their weekend: The Cleveland Persian Society will host the All Breed Cat Show today and tomorrow at the I-X Center. Cats from around the country will have the opportunity to earn Top Cat status. Hours today are 9 a.m. to 5 p.m. The event takes place from 9 a.m. to 4 p.m. tomorrow too.
1 I-X Center Dr., 216-676-6000, ixcenter.com.

A Date with Judy
Vocalist Joan Ellison joins the Cleveland Pops Orchestra tonight at 8 at Mandel Concert Hall as she performs Judy Garland’s original orchestrations for "Somewhere Over the Rainbow," "Get Happy," "The Trolley Song" and more.
11001 Euclid Ave., 216-231-1111, clevelandorchestra.com.

The Day Nites
Local soul singer Arthur “Art” Blakey made his mark with the terrific 1960s R&B vocal group the Hesitations. Not ready to hang it up just yet, he's teamed up with members of the local act Wesley Bright & the Hi-Lites to form the Day Nights. The group performs at 8 tonight at the Beachland Tavern. DJ Erin "Hot Trash" Ryan opens. Tickets cost $12 in advance, $14 the day of the show.
15711 Waterloo Rd., 216-383-1124, beachlandballroom.com.

An Evening With Greg Sestero
At 7 p.m. and 9:30 tonight, the Cedar Lee Theatre will host special screenings of the cult classic The Room to celebrate the movie's 20th anniversary. Actor Greg Sestero, who stars in the movie and wrote a memoir about his experiences, will attend both screenings and host a Q&A and show behind-the-scenes clips from the film.
2163 Lee Rd., Cleveland Heights, 440-528-0355, clevelandcinemas.com.

Guards Fest
The first Fan Fest event under the new name of Guards Fest, this event will include many of the same activities from previous years, including a Gold Glove photo opportunity (additional tickets required), player appearance, player photo opportunities (additional tickets required), a Field of Dreams baseball diamond, batting cages and speed pitch. Sessions take place from 8:30 a.m. to 12:30 p.m. and from 1:30 to 6:30 p.m. at the Huntington Convention Center.
500 Lakeside Ave., 216-928-1600, mlb.com/guardians.

G. Love
Owing a musical debt to both the blues and hip-hop, singer-songwriter G. Love has made a career out of writing and recording music that emphasizes his clever wordplay and drowsy vocal style. He and his backing band, Special Sauce, make their annual winter visit to House of Blues and perform tonight at 7 at the club. Singer-songwriter Donavon Frankenreiter opens the show.
308 Euclid Ave., 216-523-2583, houseofblues.com.

Elvis Tribute Artist Spectacular
Cody Ray Slaughter, Ryan Pelton and Shawn Klush will be on hand for this annual event that returns to the State Theatre tonight at 7. The concert begins with the early rockabilly years and continues with the military years, the movie years and The ’68 Comeback Special before closing with the Las Vegas concert years. Tickets start at $10.
1519 Euclid Ave., 216-241-6000, playhousesquare.org.

Jazz Is Dead
This instrumental Grateful Dead cover band formed way back in the late '90s but then dissolved when its founder, T. Lavitz, passed away. The group reformed in 2015, and it brings its 25th anniversary tour to the Agora tonight at 6:30.
5000 Euclid Ave. 216-881-2221, agoracleveland.com.