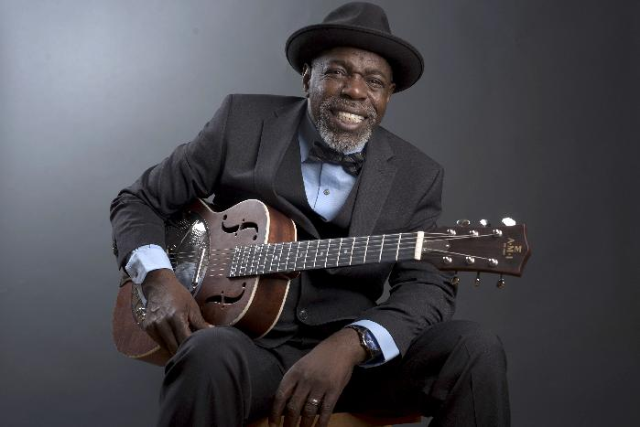 Courtesy of the Beachland Ballroom
Lurrie Bell.
Our weekly picks of the best things to do in Cleveland this weekend. Also check out our full Cleveland event calendar.

THU 01/26
Lurrie Bell
A founding member of the Sons of Blues with Freddie Dixon (son of Willie) and Billy Branch, singer-guitarist Lurrie Bell starting playing guitar when he was only 5. Active since the 1970s, Bell has now appeared on more than 50 recordings either as leader or featured sideman. Tonight's concert begins at 7:30 p.m. at the Beachland Ballroom. Tickets start at $25.
15711 Waterloo Rd., 216-383-1124, beachlandballroom.com.

Beetlejuice
Based on Tim Burton's beloved film, this musical tells the story of Lydia Deetz, a strange and unusual teenager whose whole life changes when she meets a recently deceased couple and a demon with a thing for stripes. Tonight's performance takes place at 7:30 at Connor Palace, where performances continue through Sunday.
1615 Euclid Ave., 216-241-6000, playhousesquare.org.

Neko Case
Earlier this year, alt-country singer-songwriter Neko Case released Wild Creatures, a digital-only career retrospective album featuring 22 tracks from her career. The compilation also includes the new ballad “Oh, Shadowless.” The release even includes an expanded version with new and animated artwork by Laura Plansker for each track. Expect to hear songs from it when Case and her backing band perform tonight at 7 at the Kent Stage.
175 E. Main St., Kent, 330-677-5005, kentstage.org.

Cleveland Stories Dinner Party
Cleveland Stories Dinner Party is a weekly series that pairs fine food with storytelling. Through it, the folks at Music Box Supper Club hope to raise awareness of the mission of the Western Reserve Historical Society's Cleveland History Center. The goal of the Cleveland Stories Dinner Party is to "bring to life some of the fun, interesting stories about Cleveland's past — from sports, to rock 'n' roll, to Millionaires' Row," as it's put in a press release. Tonight, Plain Dealer reporter Terry Pluto shares stories about the Cavaliers. Admission is free, with no cover charge, although a prix fixe dinner, designed to complement the night's theme, is $20. Doors open at 5 p.m., dinner is served at 6, and the storytelling starts at 7.
1148 Main Ave., 216-242-1250, musicboxcle.com.

FRI 01/27
The 5th Dimension
The roots of this vocal group date back to the 1960s when it was known as the Versailles. While singer Florence LaRue remains the sole original member, the group is still going strong after all these years; it performs tonight at 7 at the Goodyear Theater.
1201 East Market St., Akron, goodyeartheater.com.

Flanagan's Wake
No one knows grief and mourning like a Catholic, let alone an Irish Catholic. Now in its eighth year in Cleveland, Flanagan's Wake transports the audience to an Irish wake where villagers tell tales and sing songs for their dearly departed Flanagan. Finding the humor in life and death, the wake acts as a dark backdrop to an otherwise hilarious show in which alcohol fuels the humorous reminiscing. Sort of like a tragic Tony 'n' Tina's Wedding, the interactive and improvised show engages the entire audience as the guests are treated as the friends and family of the deceased. Tonight's show starts at 8 and repeats tomorrow night at 8 at Kennedy's Cabaret.
1501 Euclid Ave., 216-241-6000, playhousesquare.org.

TK Kirkland
When rapper 50 Cent needed a comic for the video release of his hit record "Window Shopper," he called upon TK Kirkland, a guy who's known as the "gangsta of comedy." Kirkland has worked as a host on BET's Mad Sports and appeared numerous times on Comicview. Given the breadth of his work, Kirkland is clearly comfortable on stage and has a natural ability to sustain a conversation. He performs tonight at 7:30 and 10 at the Improv, where he has shows scheduled through Sunday. Check the club's website for ticket prices and more info.
1148 Main Ave., 216-696-IMPROV, clevelandimprov.com.

Dave Landau
Last Comic Standing has introduced us to dozens of incredible comedians, but none quite like Dave Landau. Sharp, dark and sarcastic, Landau's standup act is standup for the cynic. He puts a new twist on the typically goofy nature of live comedy. He likes to joke that Halloween was a fun holiday for him as a kid. "I was poor and I used to have to wear a garbage bag and go as a raisin," he jokes in one bit. He performs tonight and tomorrow night at 7 and 9:45 at Hilarities in the Frolic Cabaret Room.
2035 East Fourth St., 216-241-7425, pickwickandfrolic.com.

Monsters vs. Laval Rocket
The Monsters kick off a two-game series against the Laval Rocket tonight at 7 at Rocket Mortgage FieldHouse. The two teams face off again at 7 tomorrow night.
One Center Court, 216-420-2000, rocketmortgagefieldhouse.com.

Vince Nerone
Inspired by a composition pop-punk, rock and emo-rap/hip hop, Vince Nerone's latest album, A Smile Through Suffering, which sheds light on "the relatable rollercoaster of emotions life can bring and a message of remaining positive through it all," as it's put in a press release. Winner of the recent Battle of the Land competition that took place at Tower City, Nerone makes his Grog Shop debut tonight. Campaiign, Joey James and Iggy open at 9 p.m. Tickets cost $15.
2785 Euclid Heights Blvd., Cleveland Heights, 216-321-5588, grogshop.gs.

Winter/Spring 2023 Opening Night Celebration
MoCa Cleveland celebrates the opening of its new exhibitions with this party that takes place at 7 p.m. DJ Red-I will perform throughout the evening. Admission is free.
11400 Euclid Ave, 2164218671, mocacleveland.org.

SAT 01/28
The 20th Annual Standing Rock Cultural Arts International Short Film Fest
The annual Standing Rock International Shorts Festival returns to the Kent Stage tonight. The program will feature screenings of films that are 15 minutes or less. The audience will then vote on the best film. Last year's winner, Robin Fiona, will be on hand to screen her film that won last year's contest and conduct a Q&A. The event begins at 8 p.m. at the Kent Stage.
175 E. Main St., Kent, 330-677-5005, kentstage.org.

22nd Annual Tri-C High School Rock Off
When the annual High School Rock Off launched some 20 years ago at the Odeon, the promoters at the local Belkin Productions (now Live Nation) saw it as a way to reach out to area high schools and provide the kind of outlet that students might not have. Two decades later, the event, held this year at the Rock & Roll Hall of Fame, continues to thrive. panel of music industry judges will pick three bands from each round to move on to the Final Exam. All finalists will receive the opportunity to record one original song at Tri-C’s Gill and Tommy LiPuma Center for Creative Arts with producer Jim Stewart and students from Tri-C Recording Arts and Technology program. These songs will be available as free downloads at the time of the Final Exam.
1100 Rock and Roll Blvd., 216-515-8444, rockhall.com.

Fuck Cancer Fest
As part of a festival dubbed Fuck Cancer, six Cleveland bands will play at No Class tonight. The Jötunn, Atomic Witch, Befallen, Pillärs, Terra Vista and 10,000 Rambos are all scheduled to perform, and there will be raffles of assorted donated items to raise extra money. The show is pay-what-you-want to get in. All of the money will go to Jessica Pickel, a woman with stage four cancer, and her family. Doors open at 6:30 p.m.
11213 Detroit Ave., 216-221-8576, noclasscle.com.

Victoria Victoria featuring Charlie Hunter
On its latest album, To the Wayside, a collaboration between Victoria Victoria front woman Tori Elliott, producer/engineer Stephen Lee Price, Jr. and guitarist, Charlie Hunter, Victoria Victoria delivers a low-key evocative collection of indie pop tunes. The group's tour in support of the album comes to the Beachland Tavern tonight. Hunter will join the band for the performance, which begins at 8. Tickets cost $17 in advance, $20 the day of the show.
15711 Waterloo Rd., 216-383-1124, beachlandballroom.com.

SUN 01/29
Cavs vs. L.A. Clippers
The Cavs lost a close game to the L.A. Clippers when the two teams met up earlier this season in Los Angeles. The Cavs will be looking for a bit of revenge as the Clippers come to Rocket Mortgage FieldHouse tonight at 7.
One Center Court, 216-420-2000, rocketmortgagefieldhouse.com.

An Evening with Lotus
Straddling the line between the more traditional jam band ethos and the burgeoning world of electronic dance music, Lotus finds itself in a unique position with respect to its fan bases: They’re introducing one side to the other, and the blend has proven to be pretty effective. By now, Lotus leans heavily toward the latter on most nights. Dubbed An Evening with Lotus, tonight's concert begins at 8 at the Beachland Ballroom. Tickets cost $30.
15711 Waterloo Rd., 216-383-1124, beachlandballroom.com.

An Evening with Umphrey's McGee
Formed in South Bend, IN in the late '90s, this band has been a staple on the jam band scene. The jam band comes to House of Blues tonight at 7:30. The group's been known to cover everything from the Guns 'N' Roses ballad "Patience" to Vince Guaraldi's Peanuts theme "Linus and Lucy," so expect the unexpected from this show.
308 Euclid Ave., 216-523-2583, houseofblues.com.

Jokes on You
Inspired by crowd work clinicians like Dave Attell, Ian Bagg, and Big Jay Oakerson, Jokes On You makes the audience the center of the show by "pushing comics to avoid prepared material or written jokes and instead focus on organic interaction with the audience," as it's put in a press release about this event, which takes place tonight at 7 at Hilarities. John Bruton and Jimmie Graham host the event.
2035 East Fourth St., 216-241-7425, pickwickandfrolic.com.

Zoltan Kaszas
A year after graduating high school, Zoltan Kaszas went to an open mic at the age of 19 in hopes of becoming a professional stand-up comedian. He hasn't looked back. He performs tonight at 7 at Hilarities in the Frolic Cabaret room.
2035 East Fourth St., 216-241-7425, pickwickandfrolic.com.