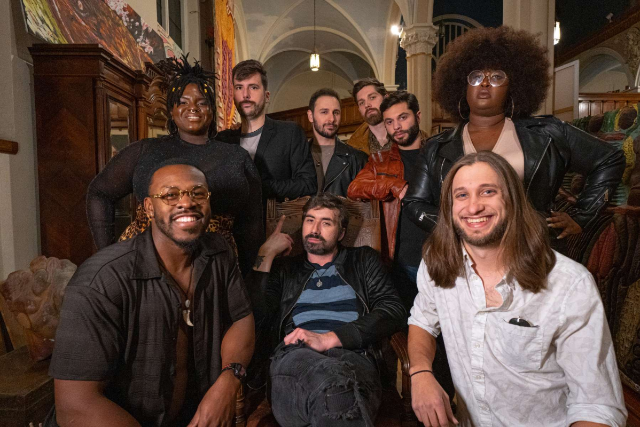 Courtesy of the Grog Shop
Apostle Jones.
Our weekly picks of the best things to do in Cleveland this weekend. Also check out our full Cleveland event calendar.

THU 01/05
Grog Shop Free Weekend with Apostle Jones/Grav/Plinko
Each year at about this time, the Grog Shop opens its doors for free to let the public take in some of Cleveland's best independent bands. The weekend of free shows kicks off tonight at 8 with a performance by Apostle Jones, the local funk/rock/soul act that puts on high-energy live shows. Grav and Plinko share the bill. The music starts at 8 p.m., and the free shows continue through Sunday.
2785 Euclid Heights Blvd., Cleveland Heights, 216-321-5588, grogshop.gs.

Josh Blue
Winner of the 2006 edition of Last Comic Standing, comedian Josh Blue received rave reviews for his 2011 Comedy Central special. In 2012, Blue, who has cerebral palsy and often references that in his routines, debuted the one-hour Showtime special, Sticky Change. Blue, who likes to joke that he's a "white African-American" because he was born in Africa, performs tonight at 7 at Hilarities.
2035 East Fourth St., 216-241-7425, pickwickandfrolic.com.

Cleveland Stories Dinner Party
Cleveland Stories Dinner Party is a weekly series that pairs fine food with storytelling. Through it, the folks at Music Box Supper Club hope to raise awareness of the mission of the Western Reserve Historical Society's Cleveland History Center. The goal of the Cleveland Stories Dinner Party is to "bring to life some of the fun, interesting stories about Cleveland's past — from sports, to rock 'n' roll, to Millionaires' Row," as it's put in a press release. Tonight's event features Wendy Koile, the author of Lake Erie: Murder and Mayhem, Disasters on the Lake Erie Islands, Legends and Lost Treasures of Northern Ohio, and Geneva on the Lake.  Admission is free, with no cover charge, although a prix fixe dinner, designed to complement the night's theme, is $20. Doors open at 5 p.m., dinner is served at 6, and the storytelling starts at 7.
1148 Main Ave., 216-242-1250, musicboxcle.com.

Gilbert Conducts Nielsen and Haydn
Carl Nielsen discovers his "mature voice" in his Third Symphony, a press described in a press release as "a ravishing love letter to his Danish homeland, filled with both seductive mystery and heartening warmth." The concert opens with principal timpani Paul Yancich as soloist in James Oliverio’s new Timpani Concerto, which was commissioned for him by the Cleveland Orchestra. The concert takes place at 7:30 tonight at Mandel Concert Hall, and a performance also takes place at 8 on Saturday night at the venue.
11001 Euclid Ave., 216-231-1111, clevelandorchestra.com.

Hamilton
With book, music, and lyrics by Lin-Manuel Miranda, direction by Thomas Kail, choreography by Andy Blankenbuehler, and musical supervision and orchestrations by Alex Lacamoire, the Broadway hit returns to the State Theatre. Tonight's performance takes place at 7:30, and the play runs through Jan. 15.
1519 Euclid Ave., 216-241-6000, playhousesquare.org.

FRI 01/06
Disney on Ice Presents Frozen & Encanto
Disney on Ice comes to Rocket Mortgage FieldHouse at this time each year to put on a show highlighting some of its more popular movies. This tour presents characters and music from Frozen and Encanto. Tonight's performance begins at 7, and performances continue through Sunday.
One Center Court, 216-420-2000, rocketmortgagefieldhouse.com.

Flanagan's Wake
No one knows grief and mourning like a Catholic, let alone an Irish Catholic. Flanagan's Wake transports the audience to an Irish wake where villagers tell tales and sing songs for their dearly departed Flanagan. Finding the humor in life and death, the wake acts as a dark backdrop to an otherwise hilarious show in which alcohol fuels the humorous reminiscing. Sort of like a tragic Tony 'n' Tina's Wedding, the interactive and improvised show engages the entire audience as the guests are treated as the friends and family of the deceased. Tonight's show starts at 8 and repeats tomorrow night at 8 at Kennedy's Cabaret.
1501 Euclid Ave., 216-241-6000, playhousesquare.org.

Gimme Gimme Disco
This tribute to the Swedish pop band that takes its name from an ABBA song performs tonight at 8 at House of Blues. Expect to hear saccharine tunes such as "S.O.S.," "Dancing Queen" and "The Winner Takes It All." The show begins at 8 p.m. at House of Blues.
308 Euclid Ave., 216-523-2583, houseofblues.com.

Into the Blue: Grateful Dead Revival
Regardless of your take on the Grateful Dead, the band to which Into the Blue, an ensemble of local musicians pays tribute, the group maintains a damn important stature in the rock 'n' roll canon. Into the Blue revives that spirit and lends it the respect Jerry and Co. rightfully deserve. Anyone interested in hearing — and seeing — great music flow from the stage should check out what these guys are doing. Fellow musicians and artists will glean inspiration. The show begins tonight at 9 at the Beachland Ballroom.
15711 Waterloo Rd., 216-383-1124, beachlandballroom.com.

Tony Rock
While not as well known as his superstar brother, comedian Chris Rock, Tony Rock has plenty going for him. In one funny routine, he talks about the "whitest thing he ever saw." He recounts witnessing a citizen's arrest at an airport when a guy leaped into "full white-guy mode" after he saw someone take an elevator "without authorization." A great storyteller, Rock performs tonight at 7:30 and 10 at the Improv, where he has shows scheduled through Sunday.
1148 Main Ave., 216-696-IMPROV, clevelandimprov.com.

Colin Mochrie and Brad Sherwood
Last year, Colin Mochrie and Brad Sherwood returned for the 18th season of Whose Line Is It Anyway?. The duo brings its Scared Scriptless tour to Akron Civic Theatre at 8 tonight. The tour celebrates their 20th anniversary together, and it promises to captivate audiences with more "games" than ever before and lots of surprises. Check the venue website for ticket prices and more info. The guys head to Packard Music Hall in Warren tomorrow night.
182 South Main St., Akron, 330-253-2488, akroncivic.com.

Mudhouse Gang
A good ten years ago, the Akron-based prog rock band Simeon Soul Charger had started to make some waves both locally and nationally. When the band embarked on a successful European tour, the band's Spider the Akronaut decided to stay in Europe. The band didn't last, but Spider the Akronaut has kept in touch with his musical friends from Akron. He teams up with Mudhouse Gang for tonight's show at the Rialto Theatre in Akron. Tickets cost $10 in advance, $12 at the door, and the concert begins at 7.
1000 Kenmore Blvd., Akron, 234-525-1956, rialtotheatre.com.

Televisionaries
This group out of Rochester, NY has opened for the likes of Nick Lowe, Southern Culture on the Skids, the 5.6.7.8’s, Bloodshot Bill, the Fleshtones, Daddy Long Legs, Robert Gordon, and Big Sandy & His Fly-Rite Boys. It comes to the Beachland Tavern tonight at 8 in support of its new album, Mad About You.
15711 Waterloo Rd., 216-383-1124, beachlandballroom.com.

Wish You Were Here
For 17 years now, Wish You Were Here, the locally based Pink Floyd tribute act that started way the hell back in 1995, has put on a special holiday show. Usually, the guys adopt some kind of theme for the gig, and this year is no different as the group will play a mix of Floyd classics and obscurities at tonight's show. The concert begins at 7 at the Agora.
5000 Euclid Ave., 216-881-2221, agoracleveland.com.

Bowie Brunch
David Bowie wrote most of his album Aladdin Sane on the road during his first U.S. tour (he kicked the trek off with a show here in Cleveland at Music Hall on Sept. 22, 1972). This tribute to the Thin White Duke includes a performance by the local band Vanity Crash and a photo exhibit by local photographer Anastasia Pantsios featuring her exclusive photos of Bowie’s concert at Music Hall. During his lecture, Thomas Mulready will discuss issues of mental health and schizophrenia that infused Aladdin Sane and most of Bowie's music through his lifetime. The event begins at 11 a.m. at Jilly's Music Room in Akron.
111 N Main St., Akron, 330-576-3757, jillysmusicroom.com.

Albert Lee Band
Guitarist Albert Lee, who reportedly left school at age 16 to pursue a career in music, played in a number of bands in the 1960s. One group, Heads Hands & Feet, took off and helped establish Lee as a pioneering player. Guitarist Eric Clapton once described him as "the greatest guitarist in the world." Find out why when the 78-year-old Lee and his backing band perform at 7 tonight at Music Box Supper Club.
1148 Main Ave., 216-242-1250, musicboxcle.com.