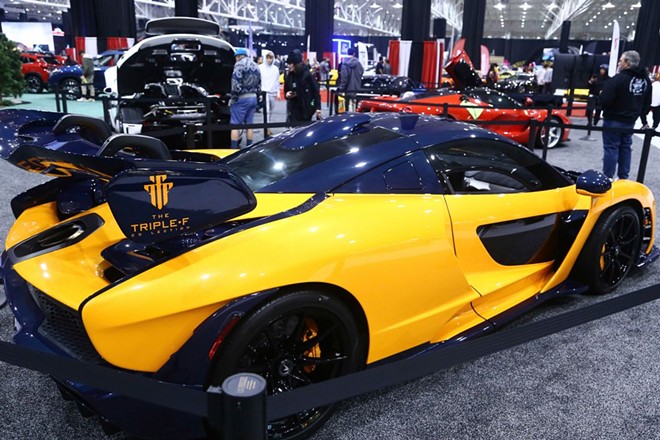 THU 03/03
Cleveland Auto Show
Featuring concept, pre-production and production vehicles from many of the world's top auto manufacturers, the Cleveland Auto Show is back at the I-X Center. The massive event occupies nearly 1.2-million square feet and features exhibits, vehicle giveaways and a classic car competition. Today's hours are 5 to 10 p.m., and the show continues through Sunday. Consult the website for a complete schedule and for ticket prices. Parking is free.
1 I-X Center Dr., 216-676-6000, ixcenter.com.

Devon Allman Project
Devon Allman Project featuring Luther Dickinson (of North Mississippi Allstars) and the Samantha Fish Band team up for tonight's killer double bill at the Kent Stage. The group will include Allman Brothers and Gregg Allman songs in the set as well as originals and "surprise covers." River Kittens will open the show. It all starts at 8. Consult the venue website for ticket prices and more info.
175 E. Main St., Kent, 330-677-5005, kentstage.org.

Danjo Jazz Orchestra
The nearly 20 members of Danjo Jazz Orchestra will fill Jilly's Music Room with a "timeless big band sound and the power of horns, wind instruments and a top-notch rhythm section," as it's put in a press release. The 2021 residency will afford fans the group’s blend of jazz standards and originals on a monthly basis as the band tears it up on the first Thursday of the month. The performance begins at 7 p.m. It's free. first Thursday of every month.
111 N Main St., Akron, 330-576-3757, jillysmusicroom.com.

Grateful Thursday
At this monthly DJ event, Proof promises to take you back to the origins of file sharing. From 7 to 10 p.m., a DJ will play Live Grateful Dead performances captured on original bootleg cassette tapes. Drink specials will include $1 Miller Lite drafts, $3 Sierra Nevada drafts and a $7 Ramblin’ Rose cocktail. Food specials will include $3 Cuban Steam Buns and $5 Half Mile High Nachos. first Thursday of every month.
2258 Professor Avenue, 216-583-0551, proofcleveland.com.

Kansas
The classic rock act known for songs such as "Dust in Wind" and "Carry on Wayward Son" comes to the State Theatre tonight at 8. Consult the Playhouse Square website for more info.
1519 Euclid Ave., 216-241-6000, playhousesquare.org.

Lilacs and Silver Roses
Richard Strauss’s comic opera Der Rosenkavalier centers on how youth and age do, or do not, mix in the arena of love. It was a sensation at the time of its premiere, and tonight the Cleveland Orchestra will perform a Suite (compiled by music director Franz Welser-Möst) filled with the opera’s "delectable waltzes and passages of ravishing beauty." The other piece on tonight's program, Walker’s Lilacs, is based on Walt Whitman's poem “When Lilacs Last in the Dooryard Bloom'd.” The concert begins at 7:30 at the Mandel Concert Hall, where concerts also take place tomorrow and Saturday. Check the orchestra website for more info.
11001 Euclid Ave., 216-231-1111, clevelandorchestra.com.

Rock Hall Nights: Sports and Rock
This special Rock Hall event will feature a celebration of the connection between sports and rock. The $21 event ticket includes touring of exhibits between 5 and 9 p.m. with activities from 6 to 8 p.m.
1100 Rock and Roll Blvd., 216-515-8444, rockhall.com.

She Loves Me
Based on the 1940 classic Jimmy Stewart-Margaret Sullivan film The Shop Around the Corner and the 1989 Tom Hanks-Meg Ryan movie, You’ve Got Mail, this CSU Department of Theatre & Dance's of She Loves Me has a book by Joe Masteroff, lyrics by Sheldon Harnick and music by Jerry Bock. Tonight's perform takes place at 7:30 at the Helen, where performances continue through Sunday. Tickets cost $15.
1407 Euclid Ave, 216-241-6000, playhousesquare.org.

Jim Tews
A former Clevelander, comedian and writer Jim Tews, the man behind The New York Times' best-selling Felines of New York, is a rising star in the comedy world. He made his standup television debut on Last Comic Standing and was one of 2011's "New Faces" at Just For Laughs Montreal. Tews also created, co-wrote and starred in The Undone Sweaters web series about "a sociophobic Weezer cover band." Funny or Die and Nerdist.com posted the series. Tews performs tonight at 7 at Hilarities. Check the venue website for more info.
2035 East Fourth St., 216-241-7425, pickwickandfrolic.com.

FRI 03/04
Fish Fry-Days
Through the month of March and for the first few weeks of April, Prosperity Social Club hosts its fish fry, dubbed Fish Fry-Days, every Friday from 11 a.m. to midnight The special Lenten menu includes the “Big Fish," which includes four pieces of hand-dipped beer battered Haddock with creamy slaw, mac and cheese, tartar and lemon, and the “Gotta Haddock," which includes everything that comes with “Big Fish” but adds a cup of creamy clam chowder and two pierogies with sauteed onions and sour cream. Call ahead for reservations.
1109 Starkweather Ave., 216-937-1938, prosperitysocialclub.com.

GlamGore
GlamGore is Cleveland's newest monthly addition to LGBTQ nightlife. Each month, GlamGore features a variety of performance artists under one roof, ranging from beauty queens to drag monsters. One of few all-inclusive and all ages productions that incorporates themed performances to elevate artists and audiences alike, GlamGore features well-rounded drag entertainers of all shapes, sizes and styles from all over the country. Tonight's event starts at 9 at the Grog Shop. Tickets cost $12 in advance, $15 at the door. VIP tickets which include a photo opportunity, a meet-and-greet prior to the show and seating, cost $20.
2785 Euclid Hts. Blvd., 216-321-5588, grogshop.gs.

New Edition: The Culture Tour
All six members of this R&B group that reached its peak of popularity in the '80s have reunited for this tour that brings it to Rocket Mortgage FieldHouse tonight at 7. Charlie Wilson and Jodeci will open the show. Consult the arena's website for ticket prices and more info.
One Center Court, 216-420-2000, rocketmortgagefieldhouse.com.

Paul Reiser
In the spare moments Paul Reiser triangulates between writing New York Times bestselling books, producing TV pilots and being a family man, he's been known to MC a charity event or two. He performs tonight and tomorrow night at 7 and 9:30 at Hilarities. Check the club website for more info., $20-$28.
2035 East Fourth St., 216-241-7425, pickwickandfrolic.com.

Wish You Were Here
This local Pink Floyd tribute act will perform the prog rock band's Animals album in its entirety at this special show at the Agora. Doors open at 7 p.m. Check the Agora website for more info.
Agora Theatre, 5000 Euclid Ave., 216-881-2221, agoracleveland.com.

SAT 03/05
19th Annual Standing Rock International Shorts Festival
The 19th annual Standing Rock International Shorts Festival will feature films from as far away as Switzerland and from as close as Akron. It will include animation, music videos, short comedy, experimental films, documentaries and more. The first part of this event will feature short films from around the world. As part of a competition, 15 short films will be screened , and patrons will vote for their favorite. A jury will also select a Juried Choice Award from these shorts. The event begins at 8 p.m. at the Kent Stage. Tickets cost $10, or $5 for seniors and students.
175 E. Main St., Kent, 330-677-5005, kentstage.org.

Antigone
Cleveland Play House’s 2020 production of Antigone was in its second week of rehearsal when it had to be cancelled due to the Coronavirus pandemic. Now, it returns for a run at the Outcalt Theatre. It features Mariah Burks as Antigone and Vanessa Morosco as Creon. Tonight's performance begins at 7:30, and performances continue through March 27. Tickets cost $25 to $75.
1407 Euclid Ave, 216-241-6000, playhousesquare.org.

The Claudettes
This year, Chicago-based blues/jazz/rock act the Claudettes have been doing the album-release tour in 2021 that we meant to do following the release of their 2020 album High Times in the Dark. Ted Hutt, Grammy-winning producer of Violent Femmes, The Devil Makes Three, Old Crow Medicine Show and Lucero, produced the disc. The concert begins at 8 p.m. at Jilly's Music Room in Akron, and tickets cost $10.
111 N Main St., Akron, 330-576-3757, jillysmusicroom.com.

Chris DiStefano
Comedian Chris DiStefano got his start on a couple of MTV shows that helped lead to a Comedy Central hour-long stand-up special. Doors to tonight's show at the Agora open at 6 p.m. Check the venue website for more info.
5000 Euclid Ave., 216-881-2221, agoracleveland.com.

Monsters vs. Toronto Marlies
The Monsters take on the Toronto Marlies tonight at 7 and tomorrow at noon at Rocket Mortgage FieldHouse. Tonight there will be a women's history celebration, and the team will celebrate its affiliation with the Columbus Blue Jackets at tomorrow's game. Consult the arena's website for ticket prices and more info.
One Center Court, 216-420-2000, rocketmortgagefieldhouse.com.

The Rocky Horror Picture Show
The Rocky Horror Picture Show, the 1975 film that still draws an exuberant, costumed crowd that likes to throw rice and dry toast and sing along to the songs in the movie, still draws big crowds to local showings. Expect a throng to show up for tonight's screening that takes place at 9:30 p.m. at the Cedar Lee Theatre. Tickets cost $12. first Saturday of every month.
2163 Lee Rd., Cleveland Heights, 440-528-0355, clevelandcinemas.com.

Tom Segura
Tom Segura likes to talk about face tattoos, drug overdoses and his hatred for hipsters on bikes. He tells his stories candidly, and his honesty is what makes them crudely funny. He’s not a total asshole, though; he does feel guilty when he eats cookies made by the Keebler elves while watching episodes of Little People, Big World. This guy’s not for the easily offended, but he knows how to deliver the laughs. You might want to leave the kids at home for this one. He performs at 7 and 10 tonight and at 7 tomorrow night at MGM Northfield Park — Center Stage. Consult the venue's website for more info.
10705 Northfield Rd., Northfield, 330-908-7793, mgmnorthfieldpark.mgmresorts.com/en.html.

Tri-C High School Rock Off
All genres of music will be represented at this annual event that returns after taking a year off due to the pandemic. Some 30 bands will compete to see who's the "best in the land." A preliminary round takes place tonight at 6 at the Rock Hall.
1100 Rock and Roll Blvd., 216-515-8444, rockhall.com.

Cavaliers vs. Toronto Raptors
The last time the Cavs played the Raptors in Cleveland, the Cavs handed them a serious beat down. The Raptors, who were short-handed at the time, just couldn't compete. Expect a closer game tonight as the Raptors return to play at the Cavs at 6 at Rocket Mortgage FieldHouse. Consult the arena website for ticket prices and more info.
One Center Court, 216-420-2000, rocketmortgagefieldhouse.com.

Drink & Draw
Tonight at 6, Wave Space, a gallery located in the Screw Factory, will host its monthly Drink & Draw event. DJ Theo will man the turntables, and there will be an open bar. Tickets cost $20.
13000 Athens Ave., Suite 360, wavespacestudio.com.

Jason Lawhead
Ohio-born comedian Jason Lawhead is back in town, just in time to make fun of Cleveland sports. Again. A great impressionist, Lawhead likes to poke fun at the family lifestyle and complaining about pop culture. Lawhead has appeared on Gotham Comedy Live and is credited with helping the underground comedy scene arise in Cleveland. He performs tonight at 7 at Hilarities. Check the club's website for more info.
2035 East Fourth St., 216-241-7425, pickwickandfrolic.com.