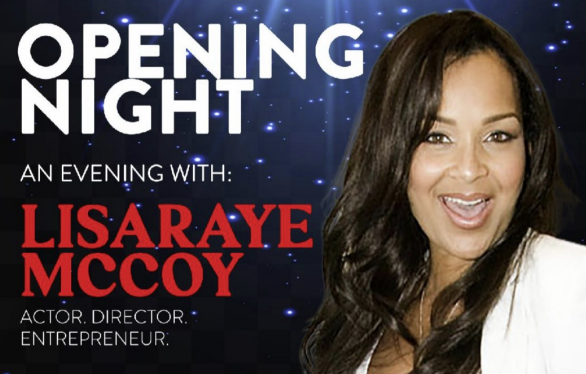 Courtesy of the Greater Cleveland Urban Film Festival
Our weekly picks of the best things to do in Cleveland this weekend. Also check out our full Cleveland event calendar.

THU 09/15
Greater Cleveland Urban Film Festival
The Greater Cleveland Urban Film Festival kicks off its annual festival with tonight's opening night party featuring actress LisaRaye McCoy. It all begins with a reception at 6 p.m. at Breen Center followed by a conversation with WKYC TV 3 Anchor Danielle Wiggins at 7:15 p.m. McCoy starred in four seasons of the breakout hit VH1 series, Single Ladies, which Queen Latifah’s Flavor Unit Entertainment produced. All in-person film films will screen at Atlas Cinemas at Shaker Square. VIP All Access Passes are available for $150; they give you access to all events including tonight's opening party and the closing party on Sept. 23 at the Western Reserve Historical Society.
2008 West 30th St., 216-397-3757, gcuff.org.

Gourmets in the Garden
From 6 to 7 tonight on the Geis Terrace at the Cleveland Botanical Garden, guests can sample bite-sized portions from their favorite chefs and learn how to make great dishes at home with delicious local ingredients. Advanced registration is required.
11030 East Blvd., 216-721-1600, cbgarden.org.

FRI 09/16
Boy George & Culture Club
This popular '80s group scored seven straight Top Ten hits in the U.K. and six Top Ten singles in the U.S. with tunes such as "Do You Really Want to Hurt Me," "Time (Clock of the Heart)," "I'll Tumble 4 Ya," "Church of the Poison Mind," "Karma Chameleon," "Miss Me Blind" and "It's a Miracle." The group performs tonight at 8 at MGM Northfield Park — Center Stage.
10705 Northfield Rd., Northfield, 330-908-7793, mgmnorthfieldpark.mgmresorts.com/en.html.

Devotional 2022
The annual tribute to the Akron punk/New Wave group Devo kicks off today at 7 p.m. at the Beachland Tavern with a pay-what-you-want event. Tomorrow's event begins at 3 p.m. Those tickets cost $37. DEVO founder Mark Mothersbaugh will attend this year’s incarnation of the event that pays tribute to the influential Akron New Wave/punk band. This year's event will mark the first time that Mothersbaugh has attended in the 20-plus years since DEVOtional started. Mothersbaugh also helped create the artwork for the event T-shirt. Other confirmed attendees include Gerald V. Casale (DEVO), David Kendrick (DEVO, Sparks), Steve Bartek (Oingo Boingo) and Michael Schwartz (Rod Rooter). The Santiago, Chile-based tribute act New Devolution is slated to perform, and there will be door prizes and raffles too.
15711 Waterloo Rd., 216-383-1124, beachlandballroom.com.

Dirty Honey
The up-and-coming rock band Dirty Honey rolls into House of Blues tonight with fellow Los Angeles-based rock band Dorothy and Detroit rockers Mac Saturn. Dirty Honey's single "When I'm Gone" suggests the band owes a debt to both AC/DC and Black Crowes, both of whom it channels in the hard rocking tune. The show starts at 6:30, consult the club's website for more info.
308 Euclid Ave., 216-523-2583, houseofblues.com.

Guardians vs. Minnesota Twins
In a series that will have a bearing on the division race, the Guardians and Minnesota Twins square off tonight at 7:10 at Progressive Field. The two teams have been neck-and-neck all season, and this is a series the Guards, who just swept the Twins in Minneapolis, need to win to stay in contention for the playoffs.
2401 Ontario St., 216-420-4487, mlb.com/guardians.

Little Shop of Horrors
The songwriting team of Howard Ashman and Alan Menken are behind this sci-fi musical that features popular favorites such as “Suddenly, Seymour,” “Skid Row,” and “Somewhere That’s Green.” The Great Lakes Theater Festival presents the play tonight at 7:30 at the Hanna Theatre, where performances continue through Oct. 9. Tickets start at $20.
2067 East 14th St., 216-241-6000, playhousesquare.org.

Chris Powell
Once an advertising executive, Chris Powell, an actor and comedian who had a recurring role on Detroiters, took his talents to Los Angeles, where he's become an established actor and comedian. He performs tonight at 7:30 and 10 at the Improv, where he has shows scheduled through Sunday.
1148 Main Ave., 216-696-IMPROV, clevelandimprov.com.

Solipsist
This local metal band first formed in 2006 and had a good run until dissolving a few years ago. This show represents its first live performance in six years. In preparation, the group has spent six months re-learning to play songs (and instruments). For the gig, Solipsist has put together a set that spans all of its releases. Axioma, Kurnugia and Druparia open. It all starts at 7 p.m. at the Foundry. Tickets cost $15.
11729 Detroit Ave., Lakewood, 216-555-6669, facebook.com/foundrycleveland.

Tenacious D
Tenacious D — Jack Black and Kyle Gass — will celebrate the 20th anniversary of their platinum-certified self-titled debut, which came out in September of 2001. The comedic duo writes tongue-in-cheek rock songs that explicitly act as heavy metal parodies even if they're good songs in their own rights. The concert begins at 8 tonight at Blossom.
1145 W. Steels Corners Rd., Cuyahoga Falls, 216-231-1111, livenation.com.

Josh Wolf
A New York Times bestselling author, Josh Wolf does a little bit of everything. The writer, actor and comedian received some serious national exposure, thanks to regular appearances on the roundtable of the old late-night talk show Chelsea Lately. In his book, It Takes Balls: Dating Single Moms and Other Confessions from an Unprepared Dad, he writes about the trials and tribulations of fatherhood. During his comedic routine, expect to hear jokes about how to teach your kids important life lessons. He performs tonight and tomorrow night at 7 and 9:30 at Hilarities.
2035 East Fourth St., 216-241-7425, pickwickandfrolic.com.

SAT 09/17
American Mariachi
Set in the 1970s and performed with live music and plenty of humor, American Mariachi offers a "heartwarming story of family, memory, and the power of song," as it's put in a press release. Tonight's performance takes place at 7:30 at the Allen Theatre, where performances continue through Oct. 9. Tickets start at $25.
1407 Euclid Ave., 216-241-6000, playhousesquare.org.

Big Sandy & His Fly-Rite Boys
Since he started performing with his backing band, the Fly-Rite Boys some 30 years ago, singer-guitarist Big Sandy has continually attracted new young fans and introduced them to Western swing and rockabilly. Sandy recently released an album of old tunes that he's rearranged into acoustic instrumentals. His music, which recalls the type of music that was popular decades ago, has an easygoing vibe that appeals to fans of traditional country and rockabilly alike. He's been playing Cleveland for years and always puts on a good show. He performs tonight at 8 at the Beachland Tavern. Tickets cost $15 in advance, $18 at the door.
15711 Waterloo Rd., 216-383-1124, beachlandballroom.com.

Tremont Arts and Cultural Festival
The annual Tremont Arts and Cultural Festival features more than 110 vendors in five Festival Villages. The festival also includes live music and dance performances. Expect to find local artists who make everything from jewelry to ceramics at the event. This year’s festival takes place from noon to 7 p.m. today and from noon to 5 p.m. tomorrow at Lincoln Park. Admission is free.
1208 Starkweather Ave., tremontartsfestival.com.

SUN 09/18
Apocalyptica
The Finnish cello metal band brings its second U.S. tour of the year to town tonight. The group will perform with singer Frankie Perez for "a month of very passionate and very loud concerts," as it's put in a press release. The band performs tonight at 7 at House of Blues.
308 Euclid Ave., 216-523-2583, houseofblues.com.

Browns vs. New York Jets
The Browns get a break this year as their home opener pairs them up against the New York Jets, a team that hasn't been competitive in a few years. The game commences at 1 p.m. at FirstEnergy Stadium. The Browns won't have starting quarterback Deshaun Watson, who's been suspended for the first several games, for today's game, but they should still be able to get the win.
100 Alfred Lerner Way, 440-891-5000, clevelandbrowns.com.

Cleveland Dragon Boat Festival
Participants have been prepping for the Cleveland Dragon Boat Festival's 250-meter heats since late May. An ancient sport whose roots can be found in China, where it began more than 2,000 years ago, Dragon Boating has been a popular sport in many Asian nations ever since. A typical dragon boat is close to 50 feet in length and holds 20 paddlers, one of whom drums so paddlers can work in sync. Three teams compete in each heat, and the teams with the three fastest times will compete for the championship. The fest starts at 9 a.m. at Black River Landing in Lorain; there will be music, vendors and family activities too.
cledba.org.

The Get Up Kids
The Get Up Kids first got together in 1995 and the band was a major player in the mid-'90s emo scene, along with Green Day and Weezer. After being signed to Vagrant Records in 1999, the band released Something to Write Home About. The album was a massive success and made Vagrant Records one of the top independent labels in the country. Since then, the Get Up Kids have been a major influence on bands like Blink-182, Fall Out Boy and Hellogoodbye. The band brings its 25th anniversary tour to the Grog Shop tonight. The concert begins at 8:30.
2785 Euclid Heights Blvd., Cleveland Heights, 216-321-5588, grogshop.gs.