'1776' Relays Our Origins in Song and Dance, With Plenty of Chuckles Too 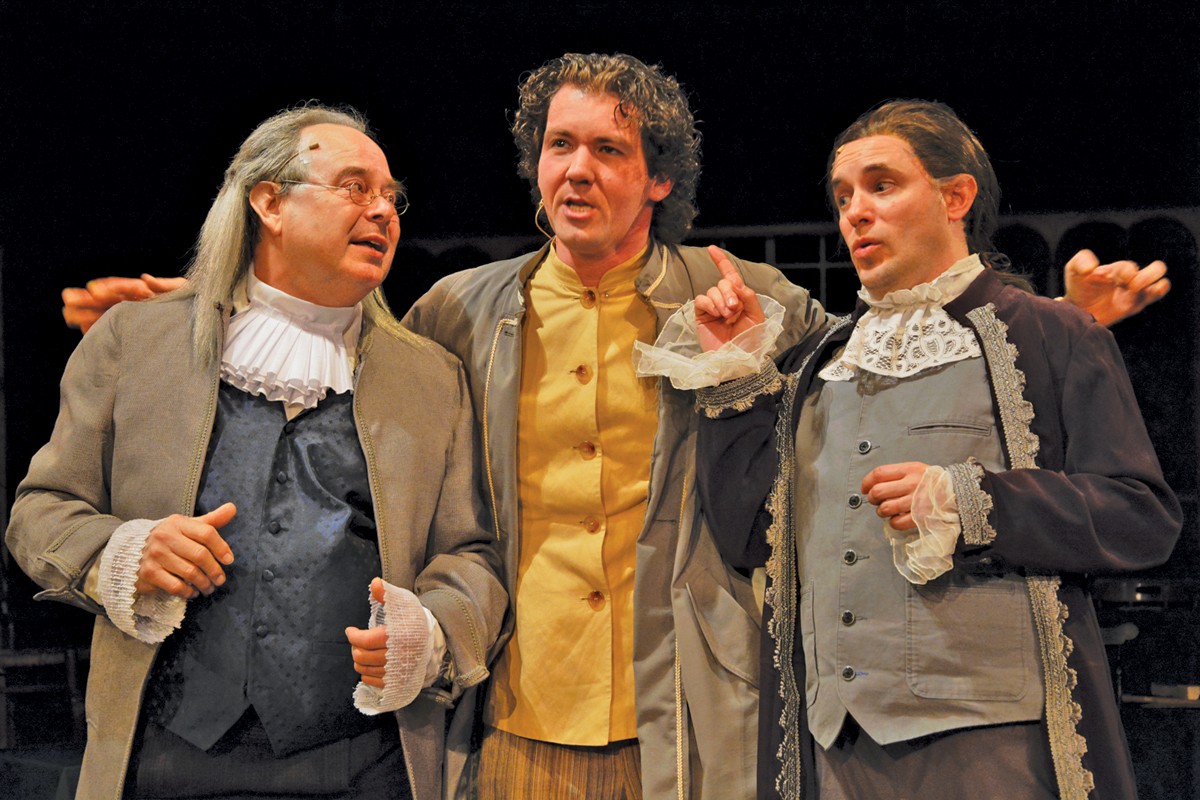 Through May 5 at Ohio Shakespeare Festival 103 South High St., Akron

You won't leave the theater humming any tunes. And the history you learn will be more than slightly fractured. But still, there is something about 1776 that makes it an easy-to-swallow antidote to the cynicism of our times. And as performed by the talented gender- and racially- diverse cast at Ohio Shakespeare Festival, it's a bunch of fun too.

The exuberant, Tony Award-winning musical (book by Peter Stone, and music and lyrics by Sherman Edwards) tells the rocky tale of how our nation came into being, complete with yucks, sex and silly antics, executed by an assembly of founding fathers and mothers who sing, dance and cavort on Greystone Hall's Henry C. Bishop Stage in Akron. (See, Hamilton fans? That blockbuster wasn't the first Broadway musical to upend America's historical gravitas — although, sure, Hamilton was first to do it with rap.) And as a bonus, the play also manages to make a few points that seem relevant to the political realm in which we find ourselves today.

That possibly has something to do with the temporal forge wherein the play was wrought: 1969, another time when many Americans thought they saw their country going down the crapper.

While it doesn't pay to strain that parallel too far, at least a few of the sentiments expressed in 1776 could have been rendered today, including the opening line, delivered by our protagonist John Adams (a dynamic, funny and commanding Andrew Cruse): "I have come to the conclusion that one useless man is called a disgrace, that two are called a law firm, and that three or more become a Congress."

And with that, the dramedy begins as the "obnoxious and disliked" Adams does his best to move his fellow colonial representatives off their complacent keisters and into the annals of history.

While we all know how the story ends — with the signing of the Declaration of Independence — what holds our interest along the way are the characterizations of central figures like Benjamin Franklin (played as a loveable imp by long-time theater pro and OSF co-founder Terry Burgler), Thomas Jefferson (Ryan Zarecki, in a portrayal that gives us a young, randy and reclusive genius), and Richard Henry Lee (painted as a loveable goofball by the engaging Jeremy Jenkins). Toss in South Carolina's unrepentant slavery supporter Edward Rutledge (Jason Leupold, who does an impressive job of calling out in song the hypocrisy of Northerners who won't own slaves but who profit from the slave trade nonetheless); and Pennsylvania's anti-independency mugwumps John Dickinson (a suitable arrogant and contemptuous Joe Pine) and the waffling, self-interested Judge James Wilson (Harold Darkow), and the stage is set for just over two-and-a-half hours of mostly witty, sometimes touching, and occasionally pointed banter, song and dance.

While critics may argue that 1776's music is mostly unmemorable, the quality of the singing remains of utmost importance. Here, credit should go to music director John Ebner, who coaxes almost Broadway-worthy vocalizations from many of the cast members. In particular, Tess Burgler (Martha Jefferson) shines in her sweet rendition of "He Plays the Violin," and Lisa Marie Schueller (Abigail Adams) is impressive in her touching duet, "Yours, Yours, Yours," which she shares with Mr. Adams. It turns out that Mr. Adams, himself, boasts a fine set of pipes, with a resonant, expressive quality that Cruse puts to particularly good use in the despairing finale, "Is Anybody There?" All singing is done to a crisp, high-fidelity recorded soundtrack; unfortunately, on opening weekend, the volume was often cranked up so high it nearly drowned out the lyrics, especially in songs delivered in higher registers.

As for the dancing, choreographer Jan Guarino gives us a series of memorable sequences, complex enough to impress and nimbly executed by the cast. Especially entertaining is the minuet that accompanies the anthem of the conservatives, "Cool, Cool Considerate Men." "To the right, ever to the right, never to the left, forever to the right," croon the eight rich white guys, while precisely executing do-si-dos and promenades beneath an arch of raised walking sticks that imitate drawn swords.

The action takes place on a remarkably large thrust stage surrounded on three sides by gymnasium-like seating. The main set — the sparsely furnished congressional hall in Philadelphia — is placed upstage, leaving plenty of room for downstage action "outside" the hall. Here, light/sound/set designer Buddy Taylor does an ingenious job of using lighting effects to set a mood and create a sense of intimacy. This is especially effective in the heartbreaking "Momma Look Sharp," a soldier's lament delivered by the Courier (Cameron Zona), where lighting places the singer into a private world of shade and sorrow; and in several tender interludes between a homesick Adams and his wife, Abigail, wherein the missus is enveloped in hazy red light to signify that their communion is through letters and not face to face.

Once all the plotting, threatening, and last-minute cajoling is complete, of course, the indefatigable Adams wins the day. Independence is proclaimed, the Declaration is signed, and an enormous Betsy Ross flag unfurls in the background as our founders freeze in an historic tableau.

It's enough to bring a tingle of pure patriotism to all but the most jaded among us. It's a small thumb in the dike of despair, perhaps, but at this point, even that will have to do.