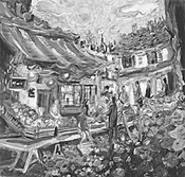 "Mouffetard St Market, Paris" by Frederic Bonin Pissarro, oil on canvas.
The charm of Frederic Bonin Pissarro's work seems, at first glance, to be a borrowed charm. In the manner of nineteenth-century French impressionist artists like his famous great-grandfather Camille Pissarro, these vividly colored views of Parisian cafés, Sunday promenades, and peaceful landscapes suggest a world where urbanization and war have been successfully held at bay. He is more than a copyist, though. What he has done in his Cleveland debut is akin to what the noted French film director and son of another famous French impressionist painter, Jean Renoir, did in a 1946 film called A Day in the Country: He evokes an earlier style, but his command of atmosphere and his sense of restraint with potentially sentimental material are impressive.

Pierre-Auguste Renoir painted his last portraits of nude bathers in 1919, and by then his rose-tinted world had been given a serious reality check by the war. Pissarro is painting after World War II and the Holocaust, and yet Renoir probably would have nodded in recognition at the nocturnal Parisian cityscapes in some of these paintings. The real question posed by this exhibit is: Why does impressionism continue to have such a hold on our imagination? (Visitors will flock to see Monet's water lilies wherever they are shown; by contrast, were it not for the controversy, one doubts that shows like Sensation at the Brooklyn Museum of Art would attract such crowds.) The 34-year-old Pissarro's wistful melancholia at the end of the millennium is refreshingly free of cynicism. This orientation is evident in the two dozen works in oil that comprise Paintings by Frederic Bonin Pissarro, on display at Opus Gallery in Woodmere. They seem to say that repose and introspection ought to be valued, and that the French impressionists understood that.

Pissarro moved from Paris to Cincinnati about two years ago. "I didn't look at a map and point to Cincinnati," the erstwhile Parisian says with a grin. "My wife Année, who is also French, was studying here." Before moving to the States, Pissarro exhibited extensively in Paris and received training at the prestigious École des Beaux Arts. France remains the subject of all his work, and so he paints from memory. He cites many influences on his art, not solely the impressionists of his great-grandfather's era. "Many writers put labels on artists, and I'm against that," he says. "I look to the past to understand the future."

Like his impressionist precursors, Pissarro uses separate brushstrokes to convey the sparkle of light. When the sun glints on a storefront facade, for example, it matters to Pissarro whether the surface being struck is dull or reflective. He adjusts his brushwork accordingly. Along with his interest in the effects of light and the way that brushwork can be varied in intensity and direction to reflect those differences, Pissarro deemphasizes human beings in his work. Men and women are often faceless silhouettes blending with their environment. It's as though they are patterns in a puzzle, not people.

One is reminded of Paul Cézanne, who once told a model, "Please pretend that you are an apple." Cézanne, though, was suggesting that the model's personality would emerge most naturally when she wasn't thinking about how she came across. Pissarro's faceless humans have no personality to begin with. This could be because the artist is interested in capturing color and light, and is relatively uninterested in creating portraits.

Pissarro's flair for sustaining atmosphere is one of the most distinctive features of this work. Here he distinguishes himself from his great-grandfather. "He was more of a social reporter, concerned about the poor people in the fields and things like that, where I tend towards memories, feelings, and poetry." Works like "Parisian Café in Trocadero" bear the younger man out: The impulsive brushwork and immediate comprehension of detail suggest how an enjoyable lunch spent in conversation with one's friends at a summer café seems to pass by all too quickly.

Sustaining atmosphere like this requires formal command. Pissarro says, "You need rules for freedom," and the observance of these rules is evident in "Parisian Café." He unifies the canvas through color and shape. The deep red of the awning that overhangs the café tables is echoed in shafts of deep orange elsewhere in the canvas: on the arms of some chairs in the foreground, on a wine-filled glass near the center (in Pissarro's universe, wine can be orange just as skies can be purple), and on the shorts of a tall figure at far left. In poetry there are "near-rhymes"; in Pissarro's art, though the reds and oranges don't rhyme exactly, they are both of the same intensity and serve a similar rhythmic function.

All this would go to naught if he didn't choose his shapes with care as well, but here, too, Pissarro knows what he's doing. The red awning forms a massive triangle that is echoed in the shape of the Eiffel Tower in the background, and these are cleverly contrasted with circular forms such as the waiter's tray and an empty table in the foreground. Immortalizing fleeting moments is tougher than it looks. Pissarro makes it all look easy.

"Parisian Café" has a breezy exuberance. It makes you feel good. There is room in the art world for works like this, especially when they're pulled off with such aplomb. After all, there is more to French music than the titan Claude Debussy. Sometimes one wants to listen to Chabrier -- a minor composer we are told, but satisfying in his own way. Same with Pissarro. Pissarro's work suggests that French impressionism and its stylistic offshoots are not spent forces. If these canvases can command attention in an era where artists commonly use shock tactics -- dung-coated images of the Virgin Mary, for example, or steel and glass tanks filled with dead sharks submerged in formaldehyde -- it might be productive to step back for a moment and ask why.

The answer probably has something to do with the popular catch phrase "thinking out of the box," which implies that most people think in the box. Pissarro, in fact, says, "Slavery still exists; not the physical kind, but the mental kind. People don't feel free." He might be overstating the case by using a slavery metaphor, but the underlying idea is sound: Many Americans have expressed dissatisfaction with work-filled existences that stifle the emotions. Rod Serling was not off the mark with his storyline in one Twilight Zone episode about a middle-aged businessman who was tired of the corporate rat race. During his subway commute home, he daydreamed about living in a rural American paradise, where bicycles were the principle mode of transportation, a band always played Stephen Foster tunes, and the local kids all looked like Tom Sawyer and Becky Thatcher. Like the fictional businessman, a lot of people long for an idyllic existence. Is it any surprise, then, that French impressionism, with its vision of cafés, boating parties, picnics, and gardens, is so enticing?

With his command of the terrain and his link to French impressionism's past, Pissarro is able to tap into these needs. The best summation of why French impressionism remains relevant today belongs to Robert L. Herbert, author of Impressionism: Art, Leisure, and Parisian Society, and he must have the last word: "We flock into exhibitions of paintings that represent cafés, boating, promenading, and peaceful landscapes precisely because of our yearning for less troubled times. The only history that we feel deeply is the kind that is useful to us. Impressionism looms large at the end of the twentieth century because we use its leisure-time subjects and its brilliant surfaces to reconstruct a desirable history."