A Fan for All Seasons 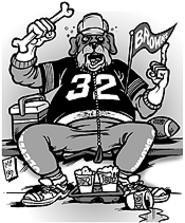 Mark Poutenis
Though they definitely get genius points for hats shaped like doghouses, Browns fans aren't famous for their introspection. And that's by design. Does warm beer on a cold day need explanation? If the sky looks like a "gray flannel blanket," well, then why is everybody freezing their asses off?

Still, writer Scott Huler, a Clevelander now living in Georgia, attempts to get in touch with his inner beast in his new book, On Being Brown: What It Means to Be a Cleveland Browns Fan.

Unabashedly sappy, consistently poignant, and occasionally profound, the book — which Huler will read from on Monday — includes first-person essays and interviews, or "moments," with former Brownsmen Brian Sipe, Gregg Pruitt, Ozzie Newsome, Bernie Kosar, and Jim Brown, among others.

The pleasures of fandom are in the details: Huler writes of the thrill of being allowed to take a sip from his dad's flask of "tea" in the stands when he was twelve, and his cousin Scott's "campy Jewish-grandmother-style nonstop chatter" when they watched a game in his aunt's den.

Sipe and Kosar offer the usual quotes about how the fans meant so much to them, man. But the most articulate player turns out to be Pruitt. He jokes about how the Raiders' Mike Davis, who intercepted the playoff pass from Sipe to Newsome in 1981, was Ol' Fumble Fingers every other day of his career. And he fondly recalls the time the fans rushed the field when he scored a sudden-death touchdown.

A freelance journalist, Huler has lived out of town since he left for college twenty years ago, so don't expect any insider info on Al Lerner's masseuse or Tim Couch's warm-up routine. In a way, however, that distance works to his advantage: He's able to hold on to a child's perspective, making the book's sentiment all the more sepia-toned.

The bond between father and son is crucial to Huler's love of the Browns: Walking across the West Third Street bridge to the Stadium for a game, he held onto the belt of his dad's jacket, "not just so that I didn't lose him, but because I didn't want to miss the conversation. I felt, for the first time, part of all this."

And when the game was over, they had the whole week to talk about it.

"There were times in our life when there was a strain between us," he says. "When there were things that were hard to talk about, we could always go back to the Browns."

Huler, who also has written a book about NASCAR racing, says the only fans he's seen who can compare to Browns fans were the NASCAR fans in Raleigh. When asked to describe the palpable feeling in the air at the races, he goes back to the Browns.

"I say, "Have you ever been to the Cleveland stadium when the Browns come out?'And it's not just any stadium — when the San Diego Chargers come out, everybody claps, yeah, but when the Browns came out, that stadium turned into a different place. It was a transporting experience."

Huler is ready to be transported again on September 12, when he joins his father in the stands for the Browns' opener.

"I keep telling my dad, all they have to do is run out on the field, and that will satisfy me. Just come out and be the Cleveland Browns." — Putre

Scott Huler reads from and signs On Being Brown: What It Means to Be a Cleveland Browns Fan from 7-9 p.m. Monday at Barnes and Noble Bookstore, 5900 Mayfield Road. For more information, call 440-473-1040.