A Little Something For The Kids

A Christmas Story Endures Into The Video Age 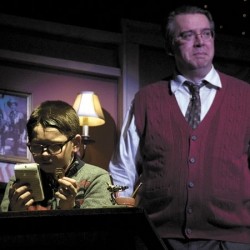 If you take your 9-year-old son to see the Cleveland Play House production of A Christmas Story, you needn't fear that the experience will have him pining for "an official Red Ryder carbine-action, 200-shot, range model air rifle with a compass in the stock and a thing that tells time." He may be the same age as Ralphie, but your 2008-vintage 9-year-old doesn't have the background for that. His superheroes don't look like cowboys or wield anything shaped like a conventional rifle.

The 1983 movie version of A Christmas Story had a strong nostalgic pull when it came out, but for today's kids - for all but today's senior citizens, in fact - the tale of desire for a BB gun is beyond the realm of nostalgia and has entered that of a period piece. So if you take anyone approximately Ralphie's age to see A Christmas Story, it won't be about the memories. His experience is likely to run along two tracks.

On the one hand, despite the passage of so much time, your 9-year-old will still feel like he's watching his peers onstage: He shares their anticipation of Christmas and maybe their complete disregard of the holiday's religious significance. If he's lucky, he's not jealous of Ralphie's two-parent household but recognizes the warm relationship with his mom and the Old Man. He's probably spoken some bad words at inopportune times. He probably knows a bully. He's certainly dared a friend to do something unknown, maybe even to test physics by pressing a tongue against some frozen bit of metal. Some experiences are timeless. Some are beyond gender too: Girls can just as easily identify with all those things. In this regard, the stage version does the movie one better by introducing Ralphie's romantic interest, Esther Jane.

The fact that the play is made from a beloved movie gives it yet another kind of appeal. Children crave familiarity. They listen to the same songs repeatedly and they want the same books read to them. The fact that the movie version of A Christmas Story is a home-video staple means lots of kids can watch it whenever desire coincides with permission. They know the story well.

Which brings us to the other way children will relate to the show: They'll find themselves - unprompted by their language arts teacher - exercising their powers to compare and contrast. Because while some scenes are lifted directly from the film, others were created for the stage. Just like in the movie, we see Ralphie's little brother Randy unable to rest his arms at his sides after Mom has dressed him for the cold weather. We see the kids run back and forth across the proscenium stage with the same window-like effect used on the movie screen. But there are differences too. So if you take your 9-year-old son to the Play House, the ride home is likely to go something like this:

"Yeah, it was a lot like the movie, but in the movie you don't see the grown-up Ralphie."

That's true. In the play, the grown-up Ralph is played by Wilbur Edwin Henry. What did you think of him?

"Yeah. I wonder if they get bored eating all that meatloaf and red cabbage. I also noticed that in the play, Ralphie gives the girl a tarantula, but not in the movie. In fact, there isn't even a girl in the movie."

Yeah, I noticed that too. The girl, Esther Jane, is played by Olivia Doria with innocence, but not quite as much innocence as Ralphie. It was nice that she gave him a Christmas card.

"Yeah, that was kind of weird. I also noticed that in the play, when they go to see Santa, you don't actually get to see Santa."

Yeah. But the movie had that fisheye view of Santa's heavily made-up and scary face. It was just as well they didn't try to do something like that onstage. What did you think of the direction? The show was directed by Seth Gordon, who's the Play House's associate artistic director.

"It was OK, I guess. What's an associate artistic director?"

Never mind. What about the set?

"I liked the way the car comes out of the trap door. And the way the fence and the houses moved so the teacher's desk could move forward was pretty cool.

"Do you want to have a snowball fight when we get home?"