A Matter of Style

Jonzei looks as good as it rocks. 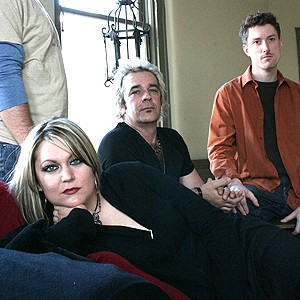 Jonzei singer Portia Connell welcomes a challenge — except when it means finding a new guitarist or drummer for her Columbus band. "When I was doing auditions, I had these cats that were either mediocre players with a hip look, or they were killer players with no look," she recalls. "There were so many times that I wanted to quit. Not to be snotty, but I have high standards — not only musically, but imagewise."

Connell and her band will show off their music and their image at the Blind Pig tonight. Armed with a set list that includes covers by Lynyrd Skynyrd, Gwen Stefani, and others, Jonzei (it's pronounced "Jonesy") will also debut its latest investment: a $20,000 strobe-light system. "If you don't like the song that's coming out of the speaker, you're going to be mesmerized by the lights," promises Connell. "By the time you're done mesmerizing, you're into a song you like." Though Connell founded the band in 1995, it has only recently discovered Cleveland's clubs. "A lot of cities are downswinging their nightlife," she says. "You guys have a killer scene."
Sat., May 13, 10 p.m.