A Surprise Around Every Wall and Corner in Memories in Transition, Now on View at Gallery W 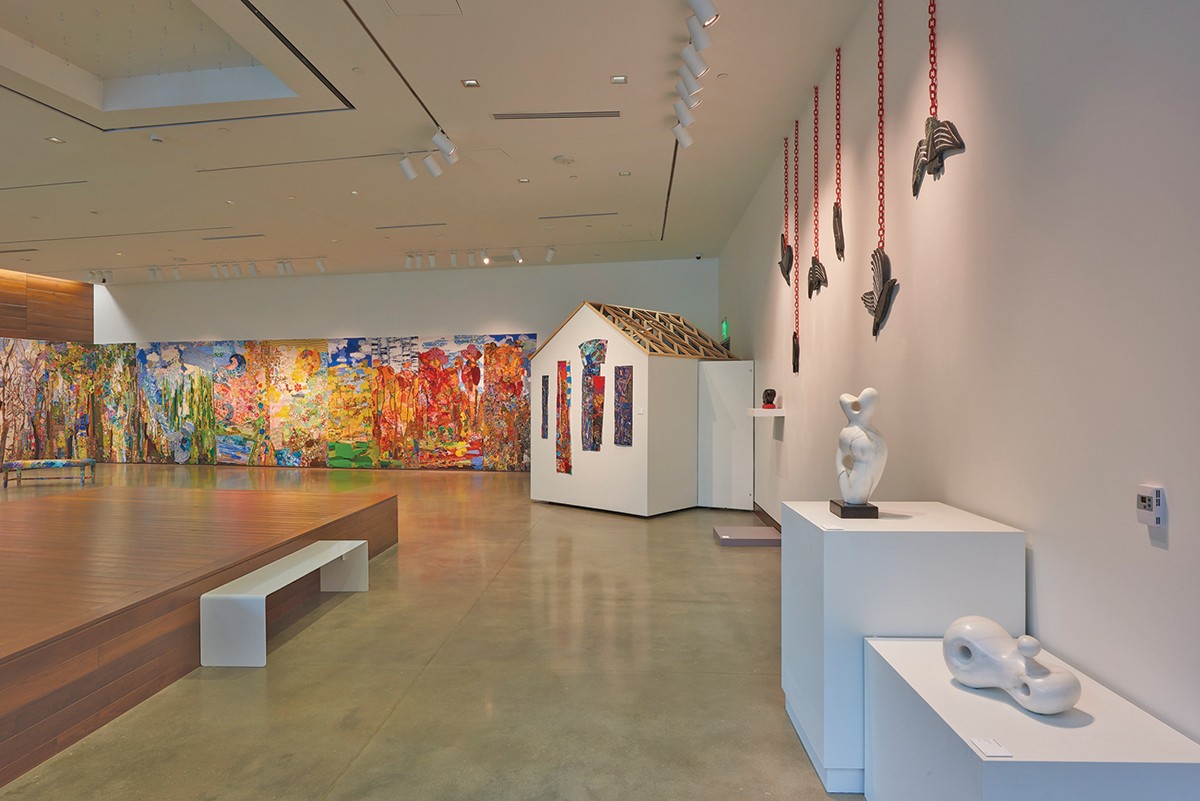 through April 25 at Gallery W, in the first-floor lobby of American Greetings Creative Studios at Crocker Park.

Textual patterns and voluptuous curves greet us as we step into the current exhibition at Gallery W, in the American Greetings Creative Studios at Crocker Park in Westlake.

The first thing we notice as we enter Memories in Transition, a two-person show featuring artists Libby Chaney and Alice Kiderman, is how the show is presented and installed. There are two tiny house structures on either side of the room that breath new energy into a space that could've been just four walls surrounding a stairwell. It's a nice touch.

Near the front of the room, we connect with Alice Kiderman's sculpture titled "Awakening." The piece is fissured and riddled with lines as only marble can deliver. There's a red line that surrounds the sculpture that takes on the shape of a head and shoulders, the red line seemingly cutting through the heart. "The two sides of the sculpture represent the positive and negative within every human being," according to the didactic. Contrasted against the black marble, the line bears a strong resemblance to the brightness of blood when it meets oxygen. As the artist states, "The red line represents the wrenching and sometimes bloody path toward enlightenment."

"Absurdia (Have a Seat)" recalls a Brancusi-esque head next to a red chair, perhaps a wink at surrealism and conceptual art. "Polka Dot Sin-Derella" is tribute to the artist Kusama, who famously uses polka dots in her work. This cheeky and fun sculpture recalls Kusama's diminutive size along with her poufy, pear-shaped dresses. Here, Kiderman has carved divots into the dress to create a polka dot pattern that has been treated with a metallic dye.

In what may be the last time one can view "Seasons," the multi-panel textile installation by Libby Chaney, the artist has created a bench upon which one can sit and appreciate the construction and the concept behind the work. We sat down for a long time in order to inhale it all. "The first thought was to install the panels spaced out, individually, but then the decision was made to bond them together," the artist says. This idea creates a seamless installation that one can sit before and really contemplate.

Then we rise and walk over to the house in the back corner of the gallery and discover a series of five exquisite collages by Chaney, an exciting reveal from the artist. "I like process. I like piling. And so I have always worked in the sort of small area, but I haven't been doing it for a while and I thought I would get back into it," says Chaney. "It's the same procedure as the larger ones. I like pattern. I like texture. I like color." "City Bird" melds the buildings of Cleveland, as well as the lake, into a landscape where our protagonist winged pal sits perched in profile. "A+B=C" is a cavalcade of ROYGBIV, an anagram for the colors in the rainbow. Rare is the artist's uncanny ability to create a small collage that holds the same impact and resonance as her larger works. We note how these small artworks look like they've been shrunk down from massive size to fit into a frame. Whereas we swim through Chaney's larger panels, these are intimate — almost portals into another world.

On the back of the house structure, there are four bonded, sewn cloth panels that can be interpreted as windows into the door-less building. In fact, one is appropriately titled, "Winter Window."

As we move through the Memories in Transition exhibit, we are treated to Kiderman's "Hitchcock's Birds (Raven)," a surprise installation depicting the seemingly soulless Corvus corax made infamous in the movie starring Tippi Hedren, an actress who notably refused the director's sexual advances. In this impressive installation, six ravens are in various stages of flight against the wall; a seventh raven sits upon its meaty red pedestal. We aren't certain if there is a philosophical reason behind the red chains that hold up the limestone birds or if the color is an aesthetic choice. It does work, however, and brings motion to Kiderman's work in this show.

The marble sculpture titled "Eclipse" resembles a sand dollar one finds on the beach at low tide. At the same time, we see two figures holding a conversation head to head. One figure eclipses the other, as in its title. It's a beautiful sculpture that really presents Kiderman's prowess with her medium.

Memories in Transition creates a nice balance between Chaney and Kiderman's artwork. The colorful, textural fabric work against the cool smoothness of the marble and limestone are undeniable pleasing and well worth the trip to Westlake.