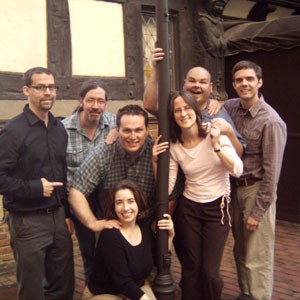 Don’t let the title of the Public Squares’ latest comedy show, Tailgaters (Heart) to Read, fool you. It’s not just for football fans. “It’s a little political, a little edgy, and very fast-paced,” says director Brett Tryda. “Our goal is to make fun of everything and everyone.” The performance opens with a set of improv scenes; it then moves on to sketches and song parodies. The group goofs on everything from Star Wars to paddleboats. And yes, there’s even a bit about the reading habits of parking-lot revelers.

The Public Squares, which formed from the ashes of Second City Cleveland, celebrate their fourth anniversary this year. By day, members slave as financial consultants, sales reps, and car mechanics. Their common ground: making people laugh. “We give talented people, who still have to pay the bills, a creative outlet,” says Tryda. While the group serves as an after-hours hobby for some, it’s also training ground for those who are more serious about their comedy. A few alum have moved on to gigs in Chicago, Los Angeles, and New York. Says Tryda: “We’re like an independent minor-league baseball team.” www.thepublicsquares.com.
Sept. 7-8, 8 p.m.