'Aladdin' Stuns with Two Great Numbers, Among Others 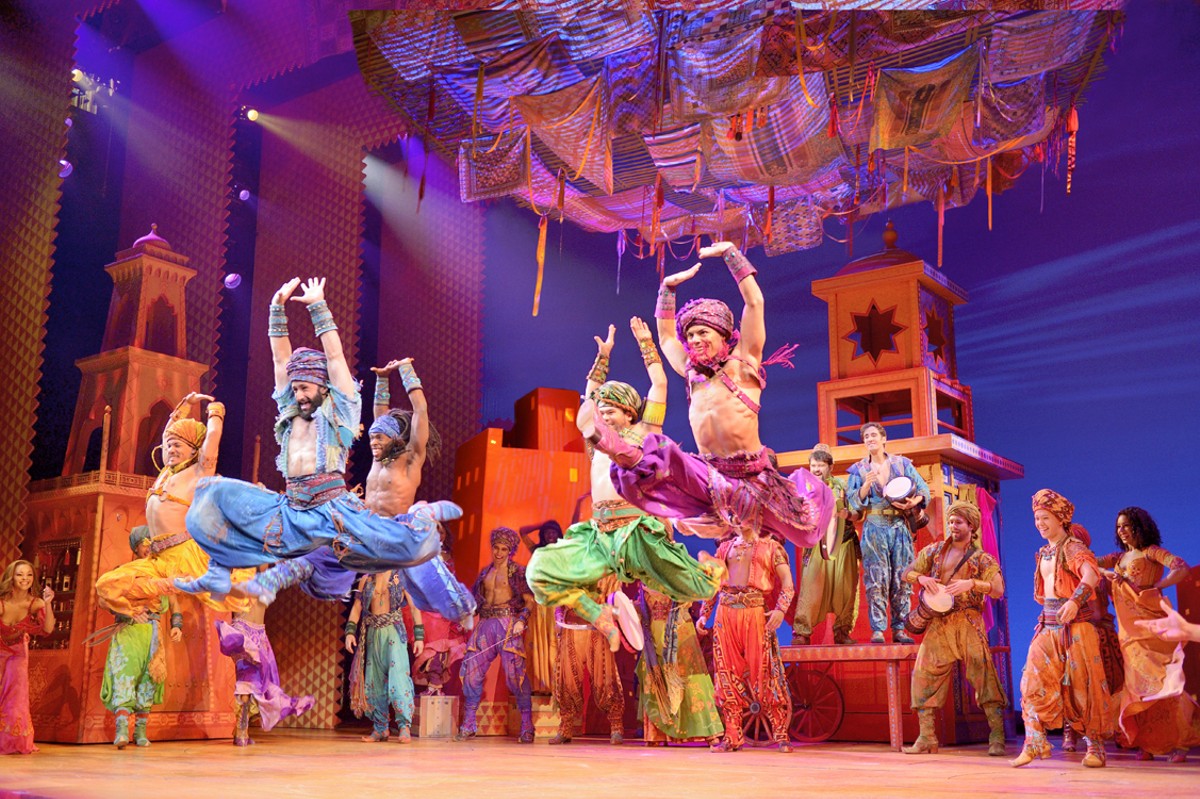 Through May 27 at Keybank State Theater, 1615 Euclid Ave.

Most musicals are lucky to have one showstopper that audience members natter excitedly about as they leave the theater. But the Disney production of the musical Aladdin, now at Playhouse Square, has two song scenes that are so jaw-dropping, they don't just stop this show, they may accidentally be stopping other shows in the area. So if you're attending a performance of Death of a Salesman at a local theater in the next couple weeks and the actors suddenly pause for a couple minutes around 8:40 p.m., and then again a while later, you'll know why.

As brilliant as those two numbers are, the rest of this show, based on the Disney animation movie, is more numbing than notable. While some of the tunes by Alan Menken (music), with lyrics by Howard Ashman, Tim Rice and Chad Beguelin, are cozy and familiar, there's a lot of filler in this bag of fluff. Indeed, by the end of the show you feel like you've been pummeled by a pillow filled with glitter.

If you've never seen a Broadway-style big musical, with gigantic, color-drenched sets and battalions of performers, Aladdin will transport you. But if you require a bit more wit and cerebral involvement from your entertainment, this touring production may feel as threadbare as a magic carpet with its backing showing through.

Even so, you must strongly consider seeing this show if only for the showstoppers. In one, the lovely ditty "A Whole New World" is performed by the title character and his heartthrob Jasmine on a flying carpet. Set against a starry night sky, the carpet does indeed appear to slowly fly, swerve and change direction as the couple croons. And like any good magic trick, the carpet flies in front of a glowing moon so you can "see" there are no wires or cranes moving it around. It is a stage effect that does what great shows like this do. It generates childlike wonderment, even if you're not a child.

The other showstopper is much more raucous and fast paced, a giddy ride down a spiral slide. After the first act has tromped along for an hour in a fairly pedestrian (although visually gorgeous) manner, Aladdin finally rubs his lamp and his Genie appears. As played by the electric Michael James Scott, the Genie is very happy to be released from his tight confines and has a hyper-speed rap that doesn't quit.

And when he launches into the song "Friend Like Me," you'd best hang on for dear life. It is performed in the Hall of Wonders, a gold-encrusted, glistening and glimmering cave that looks like a Liberace wet dream funneled through a Ru Paul daydream and then set in the Trump Tower lobby. Against this backdrop, Scott's effervescent Genie commands the stage and — along with dancers, singers and streamers shot into the audience — delivers a production number that will blow everything: your hair back, your skirt up, and your mind away.

There are other big and complex production numbers in this show, all costumed luxuriantly by designer Gregg Barnes and choreographed to the hilt by director Casey Nicholaw. But the story as written by Beguelin often feels dated and predictable. And a lot of the jokes are stale, as when two guys in Aladdin's posse of thieves are joshing with each other: "Someday I'll be stinking rich!" "You're already halfway there." "I have a gland problem."

Should we expect more interesting wordplay from what is essentially a children's tale? Well, yes, especially since there are countless examples of "kids' shows" that also have a layer of genuine cleverness that goes beyond punning on Middle-Eastern food ("Hummus a few bars of that song").

Also, there's not much heart or emotion beneath all the bangles and baubles, as the story follows a tried, true and tired formula. The boys control all the action and the girls are basically pretty trophies vying for the boys' attention. This paucity of substantial ideas is shown in the fact that the musical ends with five reprises, with not one new song to add a final, fresh perspective to the familiar yarn.

Aladdin also suffers from the lack of a compelling villain. Although Jonathan Weir does his best Captain Hook impression as nasty-pants Jafar, he's a comical baddie from the outset, so there's clearly never anything at stake for the good guys. And his sidekick Iago is equally dull, since Jay Paranada fails to find a consistent way to breathe life into this stock character.

Indeed, other than the amazing James, the acting in this touring company doesn't ignite much passion. Handsome Clinton Greenspan as the always bare-chested Aladdin has the rock hard abs required. And his exposed skin is often gleaming with sweat, either from actual physical exertion or from being lubed offstage with a spray bottle of glycerin and water. In any case, his singing is fine, but he doesn't bring an added layer of charisma to this pivotal role.

In a similar way, Isabelle McCall as Jasmine ticks all the boxes for beauty and singing voice, but her pouty expressions of faux resistance to Aladdin are as artificial as the gold lamp.

But no one is going to Aladdin to see great acting. You're going for the dazzle, the spectacle. And this production will drown you in glitz until you scream for mercy.