A pair of immigrant musicians keep their native music alive for American audiences.

Send a News Tip
The Albanian Eagles Joe's Pizza and Deli, 16110 St. Clair Avenue Every Saturday from 7 p.m. to midnight 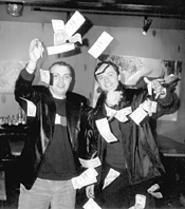 This time last year, Dolnar Spahija appeared to be holding the Albanian music world in the palm of his hand. The 23-year-old keyboardist/guitarist had earned a music degree from a prestigious arts academy, secured an impressive string of bookings at music festivals around the country, and was hosting a top-rated variety show on the state-run television network.

But despite the fame, life in Europe's poorest country brought nothing but poverty and hopelessness. Spahija's touring schedule was ambitious, but the pay was lousy. And although the TV show made him a star, he bristled at the notion of the socialist government dictating what viewers could and could not watch. So Spahija fled his hometown of Shkodër, a picturesque city at the foot of the North Albanian Alps near the Montenegro border. He was off to the United States.

There were no jobs, no money, a lot of things we didn't have, he recalls today. It's a big thing to be in America.

Spahija, like an estimated 5,000 countrymen before him, settled in Cleveland. He found a job in a restaurant and reinvented his image by calling himself Lenny.

Then he tracked down Genti Derveni, a former classmate at the Institute of High Art in the Albanian capital of Tiranë. In 1998, the 25-year-old Derveni immigrated to Cleveland from his hometown of Fier, a town 10 miles east of the Adriatic Sea. Like Spahija, he wasn't about to let government leaders continue to choke his musical aspirations.

"I had nothing," the clarinetist/saxophonist says. "I came here because of better life."

The friends teamed up to re-create the traditional music of their homeland. Spahija even programmed the sounds of native Albanian instruments -- like the çiftelia, a two-stringed guitar, and the daire, a goat-skinned tambourine -- into his synthesizer. Once they fine-tuned their repertoire, the duo set out to find a venue in Northeast Ohio.

Enter Aziz Ukshini, a 29-year-old Kosovo native who, at the time, managed Club Isabella, Cleveland's oldest jazz club. Ukshini modeled the band's name after Albania's eagle emblem. He booked the Albanian Eagles for a run of Sunday engagements at the club, where they played weekly for three months. But when the club changed hands in March, the new owners parted ways with the duo.

But Spahija and Derveni aren't yet ready to surrender their place on the Cleveland music scene. They recently landed a weekly gig at Joe's Pizza and Deli, determined to stick with their sounds and dreams.

"Most of us [Albanians] have invested our time here," Ukshini says. "It's really hard to separate this life from going back home. This is bringing happy music during sad times."