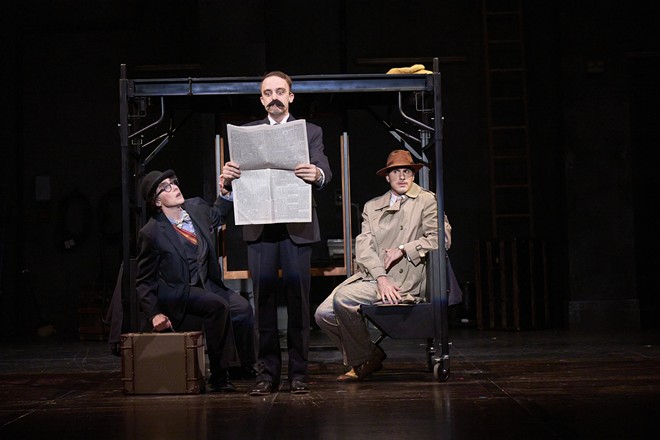 If you're going to write a parody of a film, it helps if that film is already iconic. So it is with "Alfred Hitchcock's The 39 Steps," now at the Great Lakes Theater, adapted almost scene for scene and at times word-for-word by Patrick Barlow from the novel by John Buchan.

Hitch's 1935 film is considered by some his first major achievement as a director. However, it's so loaded with impossible coincidences, improbable reactions, and lucky breaks the mind reels. The main character even avoids being shot to death thanks to a church hymnal in his breast pocket that stops a bullet (and it's not ironic).

As a young director, Hitchcock found his storytelling balance in that film, combining propulsive plotting and a deft touch of wit throughout. As for this show, it's been kicking around for about 15 years, due to its major staging conceit of having four actors portray dozens of different roles at a breakneck pace. Utilizing fast costume switches and doorways and windows that appear and disappear when required, the vibe is manic and magnificent.

At least, that's true in the first act. Even before you've settled into your seat, the main character Richard Hannay has seen a performance by the stage entertainer Mr. Memory, and has been hit on by a sultry woman, Annabella, who tells him she's being followed by dangerous men. A couple hours later, after telling him about the shady entity known as The 39 Steps, she staggers into his room and falls onto him dead with a knife in her back. Now, with a dead body in his flat, he's an innocent man on the run, as so many Hitchcock heroes are, not knowing what's happening and trying to figure it out on the fly.

This provides many opportunities for the four actors to dash about the stage and up and down the aisles, while emoting and giving their Fitbits a workout. There's a chase on top of a moving train using platforms on casters, and a chase across a moor using paper cutouts projected in silhouette. There are burlesque accents in profusion, women playing men and vice versa, and many hats swapped on and off so each actor can play multiple roles in given scenes. The first act has it all, thanks to the artful staging of director Jaclyn Miller, with the audience laughing and even applauding at everything, bless their little quarantine-crimped hearts.

But when the second act arrives, the film scenes being parodied don't lend themselves to that kind of slapstick schtick, since they are quite amusing in themselves. In one, Hannay is handcuffed to a woman, Pamela, who earlier revealed his identity to the police. Now Hannay forces her to pose with him as a passionate couple as they take a room in an inn where they have to deal with each other, the nosy proprietors, and the pursuing police. In another scene, Hannay stumbles into a local political meeting and is mistaken for the late-arriving speaker, so he has to ad lib his way through it. These scenes call for a different sort of lampooning, but here they are performed dutifully without a specific comic intent.

The energetic Joe Wegner and Maggie Kettering play the bulk of the roles, and they have a blast with unintelligible a variety of Scottish-tinged nasals and plosives. Betsy Mugavero nicely crafts three different women who fall for Hannay during his chase, including Annabella and Pamela. And Anthony Michael Martinez is a handsome and stalwart presence as Hannay, the straight man for much of the piece.

This version of "The 39 Steps" is a delightful romp until it isn't—but it is harmless and undemanding entertainment throughout. Just right for those who may be venturing out to theaters for the first time in a couple years.