All the Kings' Horses

Fabled steeds are equally skilled at ballet and battle. 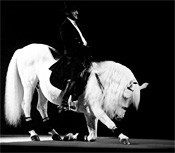 Troy Tinker knows how to handle divas — even the equine kind chomping at the bit for today's World Famous Lipizzaner Stallions two-show extravaganza at the Wolstein Center. "They're not just beautiful horses. They're all individuals with personalities and quirks," says Tinker, a Cleveland native who's been the show's emcee for 17 years, after stints with the Giant Portions improv troupe and the Great Lakes Theater Festival. "And they definitely know they're stars." Descended from Andalusians — the fiery Spanish breed — and saved from extinction by General George Patton at the end of World War II, Lipizzaners were the pre-Ferrari luxury rides of European aristocracy. Today, 14 of the white stallions trot, gallop, and leap through choreographed maneuvers, from the spectacular "Airs Above the Ground" battle move to the Grand Quadrille's intricate "ballet in horseshoes." A sassy pair of Andalusians then performs Olympic-level dressage. One of them has even figured out how to use his checklist of tricks for munchies on tour. "A year ago in California, I was outside talking to a rider, when Meluso started asking for a treat by snorting and pawing on the ground. When I said, 'Meluso, I don't have a treat,' he turns his rear to me and starts shoveling gravel on us with his hooves," laughs Tinker. "Brilliant horse." Curtain times are at 2 and 6 p.m. today at the Wolstein Center at CSU, 2000 Prospect Avenue. Tickets are $24.50 to $31.50. Call 216-687-5459 or visit www.csuohio.edu/wolsteincenter.
Sun., March 30, 2 & 6 p.m., 2008
Scroll to read more Things to Do articles
Join the Cleveland Scene Press Club