A Cinemax movie follows a Hollywood agent's quest to be a dad.

Send a News Tip
He's Having a Baby Cinemax Premiering at 7 p.m. Wednesday, June 4. It will be rebroadcast throughout the month. 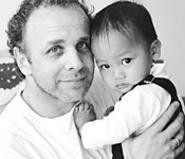 Jeff Danis is a hotshot Hollywood agent who has represented such movie stars as Jeff Goldblum, Paul Newman, and Sigourney Weaver. When he decided he wanted to adopt a Vietnamese child, it was natural that he'd hire a film crew to document it. "This began as a little home movie," he says. "But one thing became another, and it took a life of its own eventually. In the end, I felt that if it could help educate one person to understand that gay men can be healthy, natural parents, it's worth it."

He's Having a Baby, which chronicles the adoption ordeal of Danis and his partner, premieres this week on Cinemax as part of the cable network's Reel Life series (it's one of four films debuting over the next four weeks as part of Gay Pride Month). "Beginning the journey to adoption was the hardest thing I've ever done," he says. "I had a partner who didn't want it, I had a world that didn't want me to be a parent, and I didn't have age on my side."

The 52-year-old Danis's story is a poignant one. The scene in which the camera bounces from crib to crib, assessing dozens of abandoned Vietnamese children, is heartbreaking. But Baby is also funny: There's an amusing cover in bringing two women ("beards," as they're matter-of-factly referred to onscreen) to Vietnam, since the idea of two gay men adopting is frowned upon in that country. Also funny is an interview with Danis's father, who admits taking Jeff to a Playboy-type club when he was young to determine his sexuality.

The film, directed by Georg Hartmann, gathers childhood photos, home movies, and travel videos of Danis and his partner of the past 20 years, Don Pike. It covers their doubts, fears, and ultimate happiness -- the movie ends with the tyke, named Joe, trekking around the couple's lavish house. "I never thought this could be a real possibility," Danis says.

He's Having a Baby also features testimonials from friends and C-list celebrities (Linda Blair, Kathy Najimy). But the story here is that the film's seemingly biggest issue -- that Danis and Pike are gay -- turns out not to be very important. "Many of my straight friends told me, the gay thing is almost irrelevant," Danis says. "This is about the need to become a parent, whether you're gay, straight, young, or old.

"It isn't about gay parenting, per se," he concludes. "It's about two people who are having issues about becoming parents, and these two people just happen to be me and my partner."