Judd Apatow's Freaks and Geeks grow up, more or less, and move to a dorm. 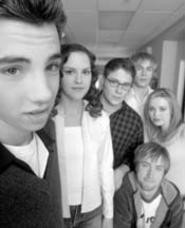 There are some familiar faces in Undeclared, but Apatow's new show is not Freaks and Geeks redux.
Judd Apatow tries not to think of what became of Sam and Lindsay Weir, Neal Schweiber, Bill Haverchuck, Daniel Desario, Nick Andopolis and the other freaks and geeks Apatow knew back at McKinley High School. Those kids were his family, the children born when Apatow and writer Paul Feig created a beloved television show, about the torturous teen-age wasteland of high school in 1980, that didn't even last an entire season. When NBC foolishly canceled the hour-long Freaks and Geeks in March 2000 with a handful of episodes left unaired, Apatow and Feig's family was torn asunder, and so the pair were not able to explore their offspring's futures--the harrowing divorce of Neal's parents, say, or Lindsay's evolution from angelic mathlete to acid-dropping troublemaker.

"I kinda try not to go there too much, because it's really depressing and painful," says the 33-year-old writer and producer of television shows actually worth watching. "If I really open up to what I have lost, there's almost no coming back from it."

It wasn't the first time Apatow, a child of divorced parents, watched his family fall apart, and it most assuredly will not be the last. After all, he is in the television business, and networks are notoriously bad relatives. Even after the critical success of Freaks and Geeks, ABC recently passed on a show Apatow created for the new fall season, North Hollywood, about struggling actors and Judge Reinhold's search for a cell phone that rings with the Beverly Hills Cop theme.

But at the moment, Apatow is delighted with his new foster home, Fox-TV, which welcomed him graciously upon hearing his pitch for a new show that could be considered something of a sequel to his old one. "I want to make Freaks and Geeks," he told the network, "only funny." And he would move the show, to be titled Undeclared, out of high school's dim and troublesome halls and into a bright Northern California college dorm, where boys and girls on the verge of adulthood are free to get drunk and have sex without fretful parents peering over their slumped shoulders. The network saw a perfect bookend to its hit That '70s Show and ordered six episodes before Apatow even wrote a script. And so, beginning at 7:30 p.m. Central Standard Time on September 18, Apatow returns to network television with a new show that looks suspiciously like his old show, down to a handful of familiar faces, and is nothing at all like his old show.

"It's not about an oppressive experience," Apatow says when comparing Freaks and Geeks to Undeclared. "It's about the reward for surviving high school--just the fact you're at college means you've achieved something--and it's about a happy time. The show isn't dark; it isn't a drama. It's hopefully a comedy with some dramatic elements, but it's about this freedom you're given while still being responsible to set yourself up for a good life afterwards. So it's, 'Should I party or study for my test?' That doesn't seem like an important issue, but it really is an important issue. When I went to Fox, I basically said, 'Freaks and Geeks was a comedy when it wanted to be, which was 30 to 40 percent of the time. But what if we did a show that was a comedy 70 percent of the time and tried to make the show more in the comedic style of Freaks and Geeks?' In my mind, it's something totally different, but subconsciously it isn't."

Apatow always knew Freaks and Geeks was going to be canceled its first season; NBC treated it poorly from the get-go, shuffling it from one bad time slot to another in order to hasten its demise. Despite its short life span, it continues to air weekly on the Fox Family Channel, where it draws some 700,000 viewers--a bona fide hit on cable, though NBC considered it a flop when it garnered some 5 million. And its fan base remains obsessive even after the show's demise: On a dozen Web sites, die-hards gather to discuss and dissect each episode, trade tapes and term papers about the show and even flaunt their autographed scripts. For them, especially, Undeclared promises to be the highlight of the forthcoming television season, in part because several Freaks and Geeks cast members show up either as regulars (Seth Rogen) or bit players (Jason Segel, Busy Phillips, Samm Levine and Natasha Melnick, for starters). Fox initially resisted Apatow's use of so many Freaks faces--"Fox had no interest in looking like they were taking the scraps of Freaks and Geeks and turning it into something else," Apatow says--but relented when the network realized the shows were two separate entities.

Still, Undeclared is its predecessor's slightly older, slightly sillier (and, at 30 minutes, slightly shorter) brother; it's also a very funny show unabashed about wearing its heart on its sweatshirt. Set at the fictional University of North Eastern California, it's a place where freshmen celebrate their newfound independence by throwing keggers, sleeping with each other, pledging fraternities, playing truth-or-dare and buying term papers from burned-out speed-freak recluses (Will Ferrell, in one of the season's best episodes). The nominal star of the show is Jay Baruchel, who plays Steven Karp, a reformed geek who uses college to reinvent himself. He is, more or less, the slightly grown-up version of Freak's Sam Weir (John Daley), who found himself at series' end transitioning out of his awkward phase. (Steven is also Judd Apatow.)

In the first episode, Steven rips up his X-Files poster, ditches his dorky pals, tries to slide by as a cool guy in cool clothes he wears as comfortably as if they were lined with bees and sleeps with the girl across the hall, Lizzie (Carla Gallo). But Steven discovers early on he can't quite leave home: His father, played by wry singer-songwriter Loudon Wainwright III, shows up during a first-night dorm party to break the news of his imminent divorce from Steven's mother. Wainwright becomes a rather permanent fixture on the show; he, too, is newly liberated and longing to remake himself in the rather uncomfortable image of a drunken, porn-collecting swinger. Steven spends the first season trying to reconcile his love for his father with his embarrassment for the old man, who can't hold a job and a beer bong at the same time.

Steven also has to cope with dorm mates he can't decide whether he likes or loathes. His roommate is a ladies'-man Brit drama student, Lloyd (Charlie Hunnam), who looks suspiciously like Heath Ledger; they share a suite with the laconic music major Marshall (Timm Sharp) and the sarcastic, easily outraged business major Ron (Freak's Rogen, a 19-year-old former stand-up comic who pens many of Undeclared's stories). And theirs is not a great friendship: These four kids are pals by accident, forced to share living quarters and sort out their differences without really knowing each other. In subsequent episodes, they find they have little tolerance for each other; Steven even abandons the group for a while to pledge a frat.

"Paul [Feig] and I think of ourselves as being a lot like Sam--well, as most of the characters on Freaks and Geeks--which is a sweet kid who's trying to survive high school and has an interest in comedy and isn't getting treated very well but in his heart is a really good guy," says Apatow. "And then Steven is a very similar type of character, but that's how I perceive myself. When I was in high school I thought, 'This isn't my time.' When I got to college I thought, 'Now is my time,' and I really tried hard to show up at college and present myself differently, as someone who might get a girl and might be popular and take the lead in situations. I failed miserably immediately...

"To me, a lot of what the show's about is this kid going to school trying to start his life at the same time his dad's life has fallen apart, and he's forced to deal with his dad's failures while he's trying to get a good leg up on his hopeful success...And Steven's taking way more shit than anybody, which is something that would always happen to me. No matter who I was with, after three weeks everyone was making fun of me."

But Apatow's is, in the end, the story of the geek whose ambition trumped his self-professed shortcomings. The Syosset, New York, native wanted to be a stand-up comic the moment his parents were divorced; a scene from Freaks and Geeks, in which gangly Bill Haverchuck, played by Martin Starr, comes home and flips on The Dinah Shore Show to watch Garry Shandling is lifted directly from his own experience. He attended the University of Southern California's film school, but stayed only two years and one month, or until the money for tuition ran out. Besides, he wanted to stand in front of a comedy club's brick wall and tell jokes, and before long, he was a stand-up who made spare scratch providing jokes for the likes of Shandling and Jim Carrey and Roseanne Arnold.

His first job in television was on another short-lived series, The Ben Stiller Show, which he co-created for Fox; it lasted 12 episodes during the 1992-'93 season but garnered an Emmy for its writing. In 1993, he took his shiny statue over to HBO, where he landed on the writing staff of Shandling's The Larry Sanders Show. During its final season, he had been promoted to co-executive producer, and he would go on to work on The Critic and a handful of films, among them Carrey's Liar, Liar and The Wedding Singer with Adam Sandler (who appears in a later episode of Undeclared, as himself).

"You know, while making Undeclared, I didn't think it was very personal to me, because I didn't spend a lot of time at college," Apatow says. "While I was at college, I was obsessed with being the next Jay Leno or Jerry Seinfeld. But the more I look at the episodes now with a little distance, I begin to see that they're incredibly personal to my experience of my family, to my experiences with my long-distance girlfriend, and to my experience of going to college and being surrounded by all these good-looking people who seemed more confident and at ease with this experience. So I guess it is personal, and I must be rewriting my experience, because Steven does get the girl his first night, and I never did." He laughs. "That's the geek's fantasy, but a lot of what I do is about the geek's fantasy."

Correction: This article says Paul Feig and Judd Apatow were co-creators of Freaks and Geeks. Actually, Feig was the show's sole creator, and Apatow was executive producer.