It’s an Irish brogue this time for Bronson Pinchot, in Stones in His Pocket at the Palace. 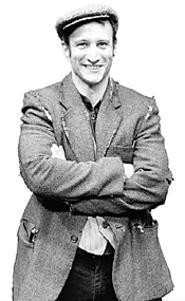 English-mangling Balki Bartokomous and coke-snorting Elliot Blitzer prepared Bronson Pinchot for his latest role. Actually, they prepared him for the nine roles he plays in Stones in His Pocket, the Tony-nominated comedy making its way to the Palace Theatre on January 7. "I started with a very vague idea of [who these characters are]," he says. "And over the course of time, I realized that I'm [incorporating characteristics of] people I know."

Set in an Irish village where a Hollywood film is being shot, Marie Jones's award-winning play (it snagged both a Drama Desk and an Olivier) has Pinchot and Tim Ruddy portraying all 15 characters -- from various extras to crew members to a spoiled starlet. "We become all these people in the story, as it unfolds," Pinchot says. "And it's actually three or four or five interlocking stories. But it works."

Seven seasons as immigrant Balki (who came complete with his own catchphrase: "Don't be ridikalus!") on Perfect Strangers and the high-profile role of a drugged-out, beleaguered producer's assistant in True Romance certainly helped Pinchot hone his characters. "I picture them very clearly in my head," he explains. "I give each one a physical mannerism."

Stones in His Pocket is great practice for actors, Pinchot says. A bare stage, no costume changes, multiple personalities -- they add up to quite a workout for thespians. "There are no assists," he explains. "There's quite a bit of pantomime involved in this. The joy of this is seeing what's not there."

But for a guy who spent the best part of his career on TV playing someone named Balki, Pinchot seems way too serious about his work. "I've always thought acting should be more like ballet," he says. "Because even someone who's never been to the ballet can instantly spot people [onstage] who deserve to be there and people who ought to be fired.

"In acting, there are huge stars that can't even say a line to save their lives." Sounds like someone let that role in Beverly Hills Cop III go to his head.