Getting to know the ground rules at Akron's Canal Park. 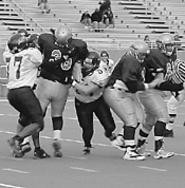 The Akron Aeros' Canal Park ranks among the best in the minors. Akron also is blessedly unencumbered by political correctness: There's no batboy; there's a "batman," who entertains the crowd by frantically twirling a bat between his legs and dancing between innings. Here's what to know:

Design quirk: The park's designers had to adapt to an existing apartment building in center field, so the outfield fence projects inward like the prow of a ship. This creates some odd angles that make life miserable for young outfielders.

Beer: Only five beers on draft, and they're all big-company brews. They cost five bucks each, and there are no naked women dancing.

Mascot: Orbit is a neon-red teddy bear wearing an Aeros jersey. What does a teddy bear have to do with the aerospace industry? Shouldn't they have a chimp? Or an alien? Or a robot?

When the ladies of the Cleveland Fusion take to the football field, the only difference between them and the fellas is the long locks of hair pouring over their shoulder pads. "You'd never know it was women playing, unless someone told you," says Tino Roncone, the marketing guy for the women's pro football squad. "They go up for passes. They get smacked in midair. They play hurt. They play just like men who get paid a million dollars a year." And they do it for about $100 a game. Saturday's regular-season finale against the Detroit Demolition will determine playoff seeding for both teams. Kickoff is at 7:05 p.m. at Bedford High School Stadium (481 Northfield Road). Tickets are $5 and $10; call 440-816-1457. -- Keith Gribbins

The Man in Blue
Paul Shuey returns to Cleveland sporting a new uniform.

When the Los Angeles Dodgers visit this week, Paul Shuey will finally see what the Jake looks like from the visitors' bullpen. "I never went over to that side," says the former Tribe reliever, who played in Cleveland for nine years before being traded last season. The move was difficult, he says. "Coming up through the organization and making so many friends in the area -- leaving all of that was the toughest part." Because he's in town for only three days, time with family and friends precludes Shuey from hitting his favorite bass pond. "I'm happy to be with the Dodgers, but it's going to be weird playing the Indians," he says. Games are 7:05 Friday, 3:05 Saturday, and 1:05 p.m. Sunday at Jacobs Field (2401 Ontario Street). Tickets are $5 to $55; call 866-488-7423. -- Steve Albanese