The members of Kodo take their drumming seriously. Very seriously. 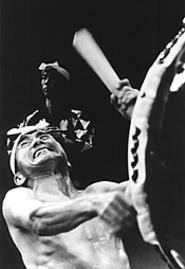 I wanna bang on the taiko all day: Kodo plays the Palace.
Japanese drummers in loincloths and headbands never received their due from Deadheads. Former Dead drummer Mickey Hart righted this wrong by producing, writing, and performing on the percussion troupe Kodo's Mondo Head.

The album was an "opportunity for us to work in the studio with an incredibly talented group of artists from myriad musical backgrounds, and to branch off from our previous studio albums, which tended to focus mostly on the taiko," says Ryutaro Kaneko, Kodo's musical director. Taiko is traditional Japanese drumming, which forms the basis of Kodo's musical adventures.

Some background on Kodo: The group has been around for more than 20 years. Up to 16 performers take the stage at once. Members live and work in something called Kodo Village. And they go through a two-year apprenticeship program, which involves getting up before 5 a.m., a morning jog, and hours of practice and cultural studies. Says Kaneko: "There is hardly a minute of the day that is unaccounted for."

Mondo Head is more worldly (and therefore more accessible) than Kodo's previous efforts. But there's also a sense of joy that was somewhat restricted before. The taiko "calls to a common urge that all human beings share -- the urge to beat a rhythm," says Kaneko, also a performing member of the ensemble. "Like all drums, it is the most primal of all instruments."

But don't look for any spiritual meaning buried beneath the rhythmic beats. Kaneko is quick to point out that the taiko is not used in any religious context within Kodo (and the group's performances are not religious ceremonies -- a common misconception). "Each member has his or her own set of religious beliefs," he says.

Yet cultural nuances are rampant. While the taiko isn't used as a communication device -- as it was generations ago -- select Kodo members don loincloths and headbands, as their ancestors did in performance. While Kaneko admits that the loincloths allow for "easy movement of the body," there's also the traditional belief that the abdomen is the body's energy center. "By tightening the loincloth around the abdomen, the performer gains a sense of balance and control," he says. Similarly, the headband helps "focus mental energies."

New-agey tendencies aside, Kodo can be a pretty fun ride, particularly onstage, where the size and spectacle of the performance -- double-headed barrel drums played by barrel-sized men, hand cymbals smacked randomly by nimble percussionists -- override the scholarly trappings. Folk elements remain, but in the most universal of ways.

"The drums allow for communication beyond language and cultural barriers," Kaneko says. "There is a definite feeling of a real exchange between performer and audience member. The beat of the drum is not simply heard; it is felt with the entire body and reverberates in the soul.

"The power of the taiko is the power to unify all people."