It’s a wild and hairy ride 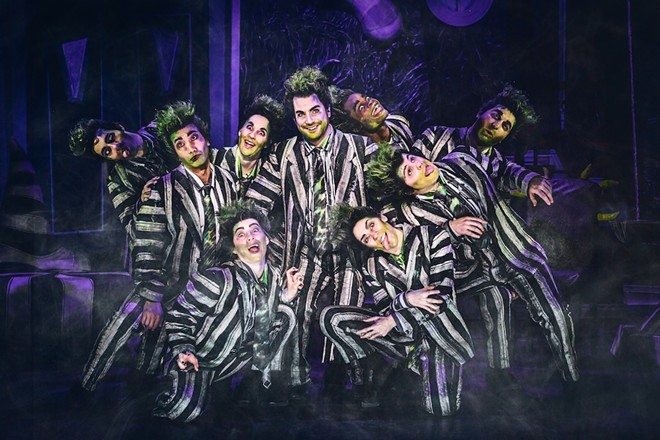 "Welcome to a show about death!" That's how the audience is greeted in the second song of Beetlejuice, the touring musical now at Playhouse Square. But this is no serious exploration of that "final chapter." Instead, it's an adaptation and homage to the eponymous 1988 flick that's become a cult classic — and everything is played for yucks (yes, both meanings).

This Beetlejuice is a wild and hairy ride, featuring a seriously caffeinated cast, monsters galore from the netherworld, and more stage effects than almost any other three musicals combined. While a lot of the songs (music and lyrics by Eddie Perfect) are not deadening, none of them stays with you for long. But hell, you're not here for long either, so why worry? The only unfortunate choice in the book by Scott Brown and Anthony King is a desire to goose up heartfelt feelings in a show that would be more invigorating if it maintained a harder comic edge.

It all starts with a nice couple, Adam and Barbara, dying in a tragic extension cord accident. They wake up as corpses, but soon realize they're no longer among the living when they can't feel their fingers on fire. They are mystified about what they're supposed to do as disembodied creatures who are invisible to live humans.

This becomes an immediate issue when their house is quickly bought by another family. These include wealthy widower Charles (Jesse Sharp), his life coach and hot new partner Delia (the pratfalling Kate Marilley) and his teen daughter Lydia (Isabella Esler), a goth wannabe who is mourning her recently deceased mother. 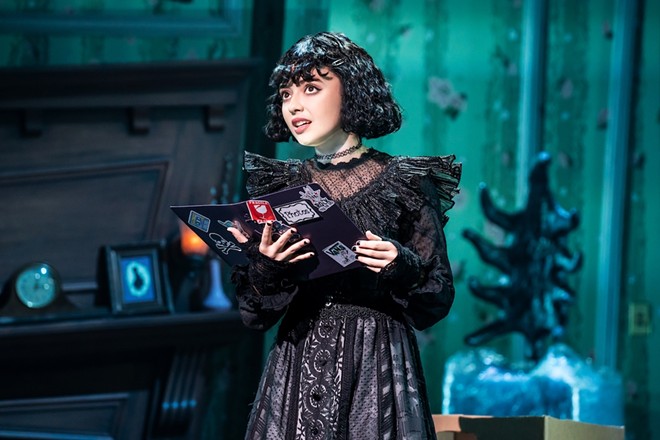 Morose but curious Lydia easily spots the rookie ghosts because she is strange and unusual, like them. And when Adam finds a handy guidebook for the recently deceased, they're off on their postmortem task to try to scare Charles and Delia away. Who knew a dirt nap came with a list of chores?

As the clueless dead couple, Will Burton (who gives off a nice Phil-Dunphy-from-Modern Family vibe) and chipper Britney Coleman forge a strong centerpiece for the show, which is needed since the frenetic storyline frequently bounces off the walls.

There are an assortment of tangential scenes and some of them work, such as when Adam and Barb use their new spooky talents to make Charles and his refined dinner guests channel the “Banana Boat” song by Harry Belafonte, complete with appropriate dance moves. It makes no sense, but it's hilarious. But other diversions fall flat, such as a featured song by Miss Argentina, live from the netherworld.

Unlike in the film, Beetlejuice himself appears right away as our demented, green-haired host for the evening. He's a long-dead faux bio-exorcist who worms his way into Babs’ and Adam's not-so-happy afterlife, and he jump-starts the show with his theme-planting song, which features some clever meta lines: "Death can get a person stressed/So don't be freaked/Stay in your seats/I do this bullshit, like, eight times a week."

As Beetlejuice, Justin Collette is one freaky corpse, creating a whirling dervish of energy and surprises. Trouble is, this adaptation rounds all the corners off the Beetlejuice character, turning him into a troublesome older brother rather than a horrifying creature from our nightmares.

Also, in an attempt to give Lydia a heart-rending arc, the creators saddle her character with three emotional anthems that feel like copies of each other as they strain to establish Lydia's profound teen angst — first in "Invisible" ("Yeah, the words cut deep/but they don't mean you're all alone/And you're not invisible"), then in "Dead Mom" ("Dead mom/I'm tired of trying to iron out my creases/I'm a bunch of broken pieces"), and finally in "Home" ("No light above and there's no hope below/And I don't know which way's home").

Esler sings these numbers with authority and nuance on her way to an ill-advised wedding with BJ, complete with a memorable blood-red gown. But her tunes seem like an odd fit with the rest of the mayhem when one such cathartic ditty would suffice. Also, the creators try to force-fit a happy ending for Delia even while they admit she doesn't quite belong.

These wrinkles aside, Beetlejuice is a freakazoid romp with dancing skeletons and a menacing sand worm at the front door. And that's more than enough for a hellacious evening of theater.