Flash Forward At Spaces Skips To The Present 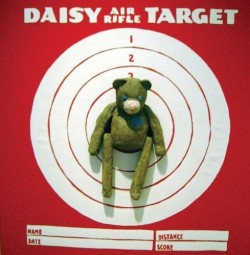 Cleveland-based conceptual artist Mike Jones was looking for responses to his video/performance work "Transmitting Providence" (2009), on view as part of the show Flash Forward at SPACES Gallery. He got some: "God lives in Lake Erie," wrote a transcendentally minded visitor, using a green marker provided by the artist. Other remarks are less visionary: "I feel as if Mike Jones just shat in my church," reads one. Comments range from an old, bad joke - "If God is so good, why did he send me my wife?" - to the one word-appraisal: "BORING," inscribed near the floor. The video itself shows 25 people, described as "believers," addressing spiritual advice to gallery-goers. The subject here, Jones explains, is mediation - how an authentic experience of God (or anything else) must inevitably pass through filters. But if you're looking for a reaction, religion is a subject that often takes the most direct available path to emotional response; Jones' experiment provoked a wall full.

He isn't the only artist at SPACES wondering how to be seen or heard, and whether there's anybody listening. The 11 others in Flash Forward also work and make their homes in our under-mediated northern Ohio region. The rent is cheap, the music is plentiful and God may in fact live in Lake Erie. Maybe that's where the art market is too; it certainly isn't anywhere else around here. That's the darker background of Flash Forward, a group show of gifted, early-career artists who, for the time being at least, have settled here after matriculation from schools like the Cleveland Institute of Art, Cleveland State University and Kent State University. The forward "flash" in question is from the relative shelter of academia to a vulnerable point some few years later, when the beginning of a mature artistic identity begins to take shape. That three of the "local" talents on view are originally from Bosnia, Japan and Germany makes the additional, more reassuring point that contemporary American art almost always takes place within a larger context. Midwestern isolation is in part illusory.

A blend of psychological and formal concerns is typical at Flash Forward.

Jennifer Schulman of Stow completed her MFA at KSU three years ago and teaches art to children. At SPACES, she shows a number of works based on toys and games, reflecting anxieties and currents of domestic abuse encountered just beneath the deceptively polished surface of childhood. "Target" is a four-foot-square, red-and-white painted enlargement of a 1950s-era Daisy Air Rifle target, with a handmade version of a teddy bear mounted in the center. "Trouble" is another vision of the inescapable nature of family dilemmas from a child's perspective. Fabricated from plexiglass, cloth and photographs, it shows a boy at the center of a big X, the focus of a mysterious game. Schulman's children are shrink-wrapped in a colorfully synthetic world, booby-trapped with miserable little secrets.

Lakewood printmaker Glenn Ratusnik is another relatively recent KSU grad, known lately for his remarkable series of "State Proof" etchings depicting a gradually transforming view. He treats a single zinc plate as if it were a labor-intensive Etch a Sketch, articulating and obliterating images of interiors and landscapes. Ratusnik's images melt into manipulations of the abstract qualities of the scarred and pitted, polished and renewed etching surface. Audiences watch as scenes change inexorably from print to print, like pictures developed slowly in a mysterious psycho-photo process.

Cleveland's Lorri Ott produces hybrid abstractions that oscillate between painting and sculpture. ÊLike Ratusnik's etchings, her works react to landscape and a highly personal history of optical impressions. Made of poured resin, canvas and paint, Ott's colorful amalgams re-imagine transitory qualities of time and place almost as a further layer of skin. Kent-based Kelly Urquhart and Jaime Kennedy work as a team to produce finely detailed composite images, often superimposing delicate drawings of plants and animals over scientific text and diagrams. Similarly, Hudson artist Ann Hanrahan, in her vivid mixed media paintings on paper and canvas, produces a type of duet, weaving loose, doodle-like shapes and squiggles in and out of a more regular matrix.

Most of the art at Flash Forward is more or less traditionally mounted either on a wall or a pedestal, but Youngstown's Dragana Crnjak makes floor-to-ceiling abstract murals using charcoal. She compares her trompe l'oeil marks, which seem to protrude and recede in relation to the white walls the artist uses at the back of SPACES, to the free-form structure of villages in her native Bosnia. The overall dynamic effect is unsettling, like watching iron filings affected by a magnetic field. Nearby, Lakewood artist Yumiko Goto's six-foot-square ceramic work,Ê "Field #1," constructed from several hundred thin, folded sheets of porcelain, rests on the floor in a bed of black sand. Seen from above, it looks like a cluster of pear-shaped leaves. Here and with two other installations that partially interrupt SPACES' long gallery like sections of garden wall, Goto explores the association between architecture and plants such as ivy or ornamental shrubs.

Clevelander Amy Kreiger actually paints and draws people. This is not an everyday occurrence, at least at SPACES. Her larger-than-life portraits of young faces and fashions are straightforwardly sassy depictions that capture some contemporary postures, moods and styles. Working in colored pencil and oil on canvas and paper with innovative skill, Krieger reminds us that art is, after all, about the body, the things we do with it, the way we hold ourselves - and that any face is fundamentally our own.

Ê IF ALL THIS leaves you hungry for more art, there are two more one-person installations on view at SPACES. Mexico's Leonardo Marz, current SPACES World Artist Program (SWAP) artist in residence, fills the back of the gallery with a video exchange of himself and a friend spitting at each other ("The Spit Machine Returns"), as well as a potpourri of works dealing with the concept of DIY commercial-craft projects and a sound homage commemorating Buddy Holly's death on February 3, 1959.

In SPACES' largest adjunct gallery, Utah State University sculptor Eileen Doktorski presents a memorable parable of emotional isolation and consumerism in her installation "Oblivion." Life-sized sculptures of a man and woman seem to be half-submerged in the floor, surrounded by a vast, drifting tangle of wave-worn objects and possessions. It's on view through February 27.