Bitchin' in the Kitchen 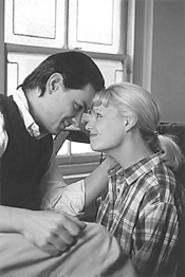 Jason Markouc and Tonya Beckman enjoy a rare moment of harmony.
A revival of Look Back in Anger can be much the same melancholy experience as attending the comeback of an aging blond bombshell. One can still see traces of former appeal, but the sag of ensuing years on finite attributes, fresher, younger copies, and changing objects of fascination can render yesterday's big news as faded remnants.

It's a testament to the tenacity of the nascent Charenton Theater Company, and particularly to director Jacqi Loewy's skilled direction of a superior cast, that a play that has grown into a shabby study of a dysfunctional marriage here takes on the ghostly illusion of its former glory days, when it was being compared with the work of Chekhov and labeled the hope of British theater.

By 1956 the Empire was doddering toward a state of post-war senility. Onstage this was often reflected in class-conscious reveries of old-school pluck. While a dying generation of matinee ladies of both sexes were wheezing at the bon mots that had so tickled the late king, university-bred malcontents filled the pubs with angry protests as they waited for a new bard to pen kitchen-sink dramas.

Into this miasma, a combustible 27-year-old performer named John Osborne tossed off -- in a few days --his first play, a firecracker that would blow the dashing blue-bloods and duchesses off their drawing-room thrones. The play thrilled British audiences as a counterpart to Marlon Brando's The Wild One, whose motorcycle hoodlum challenged American conformity and blandness (asked "What are you rebelling against?" he answered, "What've you got?").

Jimmy Porter, Osborne's red-hot protagonist, is written with the same fascination for young audiences as Brando's emotional terrorist. He is a lightning rod, the raging force that keeps this 44-year-old play from seeming like a lifeless slab of mutton.

Porter is a Hamlet without a mission: A university grad and jack of a half-dozen trades, he spends his time shouting invective at government, church, society, and his wife. He rants and raves against everything but the failure that festers within himself. In constant attendance is his easygoing young mate, Cliff Lewis, an affectionate puppy dog who begs for his love while undercutting the play's constant hostility. When the smoke clears from Jimmy's intoxicating invective, we start to recognize Osborne's second-rate carpentry, with plot developments that have the emotional veracity of soap opera.

In a claustrophobic coldwater flat in a midlands manufacturing town, Jimmy has risen by dint of education from the working-class mentality that surrounds him. He is cursed with an intellect that only shows him that the things that might have lifted him out of the muck -- adventure, marital bliss, and financial well-being -- have disappeared without being replaced by anything but a lackluster sameness. He channels his anger in a hurricane of venom fashioned of such superb phrases that his dialogue is worthy of a cockney reincarnation of Shakespeare.

His wife, Alison, who never seems to leave the proximity of the ironing board, bounces alternately between adoration and disgust. In the second act, Helena, an actress friend of Alison's, does a Blanche DuBois number, ranting about Jimmy's beastliness and driving the wife back to parental sanctuary with her unborn, while slipping into her vacated bed and the arms of the angry young husband. Alison, having lost her baby, comes crawling back to the attic flat to explain, with typical '50s masochistic feminine logic, that she can't stand living with her Jimmy, but she can't live without him.

If Charenton's Look Back in Anger avoids the musty stench of antique outrage, it's due to Loewy's ability to skillfully turn up the pressure cooker. The audience is crammed like flies against the cracked plaster walls and shabby bric-a-brac in the director's lower-depths re-creation of the Porters' abode. The ticket-buying gawkers cannot help but feel like interlopers in a private battle. Jason Markouc's Porter is a tribute to his drama coaches. With his ferret-like sex appeal and acquired upper-class accent and occasional lapses into cockney, he absorbs Osborne's boyish sadism in a vibrant performance. As an extra bonus, he wails a mean sax.

Ever since its premiere, this drama has divided critics and audiences into two camps. One sat in numbed distaste and outrage. The other shivered and applauded the angry young man's outbursts. Kenneth Tynan, the influential English critic (noted for his predilection for spanking), once declared, "I doubt I could love anyone who did not wish to see Look Back in Anger."