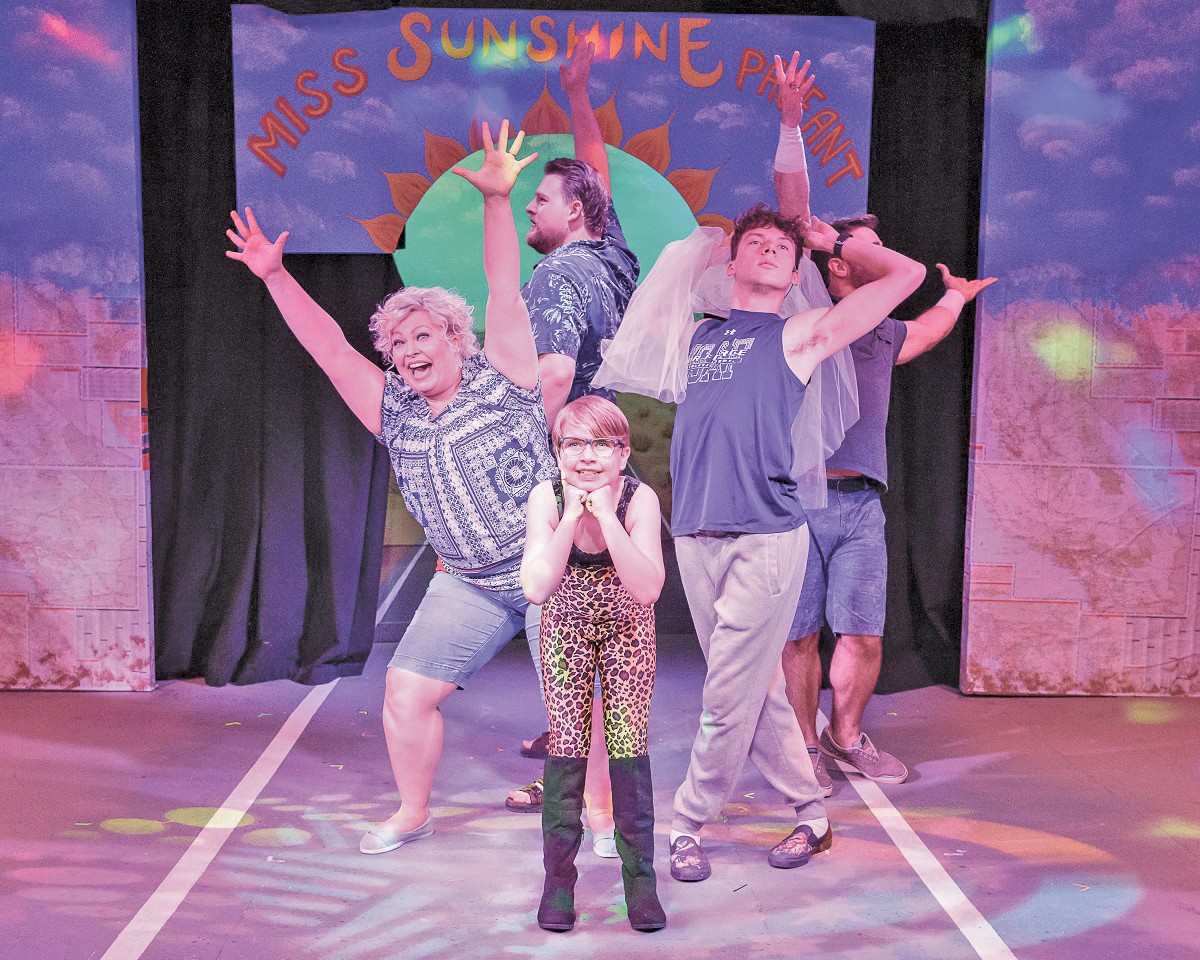 Olive (Poppy Wadenpfuhl) and her family give it their all. Photo by Andy Dudik

Of all the films released in the past 20 years, Little Miss Sunshine would seem an unlikely choice to get the Broadway treatment. The charming indie family drama from 2006 garnered sizable success and landed Alan Arkin his first Oscar, but normally that would be the end of the story.

But as James Lapine, who adapted the story, and William Finn, who wrote the music, demonstrate, there was something in the sparse, sweet story to mine for the stage. In their hands, the play is less of a reinterpretation of the film and more of a creative overhaul as the events are reimagined for a musical. Several runs across the country later, and the stage adaptation of the Academy Award-winning screenplay by Michael Arndt makes its Cleveland premiere at the appropriately quaint Blank Canvas Theatre.

Going through the motions and struggling to remain a solid family unit, everyone's plans take a sharp turn when they find themselves embarking on a road trip to support Olive's dreams of entering the titular Little Miss Sunshine pageant. For 800 miles — from their native Albuquerque to the sandy shores of California — they are stuffed into a daisy-yellow Volkswagen bus: the last place anyone, save for Olive, wants to be.

Though most of the family views the voyage as a detour from their shortcomings, the trip begins to force the family to get a handle on their issues one way or another, with many additional speed bumps on the way. Even with their missteps, the family members remind each other that it's more important to never give up and stick together — for better or worse.

There is a contagious kinetic energy throughout the production, from the lone road backdrop to the fact that nearly every prop is on wheels. Whether the family is dancing around, struggling to catch up to or move their stubborn bus, there's always something going on.

Oftentimes the play even brushes up against the line of interactivity, especially when the audience doubles as the Little Miss Sunshine pageant audience. Credit is due to director Johnathan Kronenberger and choreographer Katie Gibson for creating an engaging play that utilizes every inch of the space in some creative way or another.

Conductor and music director Patrick Wickliffe complements the play with an equally kinetic mixture of showtune-style Big-Band pieces and jazzy interludes. Adding to the showy orchestral swells is some dazzling lighting by Brad Hughes, especially notable during several musical numbers.

The ensemble cast also brings an incredible energy and belts out some memorable musical numbers, including "Pushing the Bus" and "The Way of the World," where family members allude to their inadequacies with a sarcastic tongue in cheek.

Winger and Netzband share incredible chemistry, through their banter and through song, as the constantly combative couple. Each of them has a wonderful, commanding voice and they pair beautifully, especially in numbers like "Always Makes Me Proud."

As Grandpa, Tavcar spouts one hilarious quip after another and bellows some delightfully vulgar lyrics in numbers like "The Happiest Guy in the Van." Meanwhile, Wadenpfuhl is simply adorable as the naïve Olive and makes the most of moments meant to pull the audience in with some good old-fashioned shock humor.

Aside from resembling Steve Carroll to an almost uncanny level, Altman is splendid as the sympathetic yet determined Frank. Along with DeJesus — whose pivotal moments to shine ooze with intensity similar to Paul Dano from the film — they balance the more comedic moments with some heartfelt instances of family bonding.

The other members of the ensemble cast are also extraordinary, including the mean girl ensemble (Cora Barcelona, Avery Jankowski, Taya Offut Decker and Lyric Zeager), which proves to be the bane of Olive's existence with their incessant jeers and maniacal laughter.

Robert Pierce — who plays multiple roles including a pageant host donned in blindingly vibrant sequins — nearly steals the show with a boisterous, over-the-top attitude. His zany antics are only matched by Leslie Andrews, also playing multiple roles, as they often share the stage and play off each other incredibly. Another performer pulling double duty is Adam Graber, also oftentimes paired with Pierce as a foil of sorts to his bombastic behavior. Graber switches from Joshua, Frank's assertive and flamboyant ex-boyfriend, to the chill pageant assistant effortlessly.

As with many musical adaptations, there are creative changes to the structure of the original. While the heart and soul of the film and many of the fan favorite scenes and quotable moments remain intact, the adapted script removes some of the emotional weight that the film had, injecting music into moments where the film uses silence to convey its message.

That, of course, is no fault of the folks at Blank Canvas, who have taken this musical and created something special. Their production matches the whimsical yet tragic movie that people loved 13 years ago with some impressive musical accompaniment. With a story that weaves tragedy and comedy, Little Miss Sunshine has something for everyone and is guaranteed to both warm your heart and make you laugh.