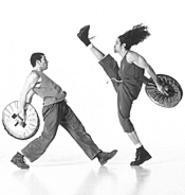 Sure, Stomp is essentially eight people onstage banging trash cans, smacking hubcaps, and tramping their booted feet. But don't reach for the Extra Strength Tylenol, says John Sawicki, rehearsal director for the touring group, which comes to the Palace Theatre Tuesday. "It's really not as noisy as people think it is," he explains. "We find the tone and pitch in the everyday objects that we play and make them sound like music, rather than just noise."

Audience members are encouraged to make their own noise too. "We consider them the ninth member," Sawicki says. Even if you caught the show during its previous stops in town, it's different every time, with new bang-worthy objects incorporated regularly. "Every night we get to do some of our own stuff, which keeps it fresh," he says. Stomp is at the Palace (1519 Euclid Avenue) Tuesday through September 21. Performances begin at 7:30 p.m. Tuesday through Friday, 5 and 9 p.m. Saturday, and 1 and 5 p.m. Sunday. Tickets range from $20 to $45; call 216-241-6000. -- Diane Sofranec

Todd Snider
He's a Live One

Singer-songwriter and roaming troubadour Todd Snider built his fan base the old-fashioned way: by touring relentlessly. So it makes sense that after five studio albums, he's finally gotten around to releasing a live CD, Near Truths and Hotel Rooms. On it, he tears through such favorites as "Beer Run," "Statistician's Blues," and "The Ballad of the Devil's Backbone Tavern." And he fills in the gaps by relating the often-hilarious stories behind the songs. Experience Snider firsthand at 8:30 p.m. Saturday at the Beachland Ballroom (15711 Waterloo Road). Tickets are $12, available by calling 216-383-1124. -- Michael Gallucci

The Danish garage-rock duo the Raveonettes give themselves a little more room to move on their debut album, Chain Gang of Love. On the earlier EP "Whip It On," they limited themselves to songs played in B minor, with no more than three chords, for no more than three minutes. And while primal, guitar-based music is also at the center of Chain Gang, expanding the sonic landscape reveals some interesting textures. See if you can spot the Beach Boys, Buddy Holly, and Phil Spector's girl groups among the distorted guitar assaults. Think of the Everly Brothers, backed by the Jesus & Mary Chain. The buzz is heavy on the Raveonettes. Catch them at the Beachland Ballroom (15711 Waterloo Road) at 9 p.m. Wednesday. Tickets are $10 and $12. Call 216-383-1124 for more info. -- Michael Gallucci