A little different than the movie, it still has its heart in the right place 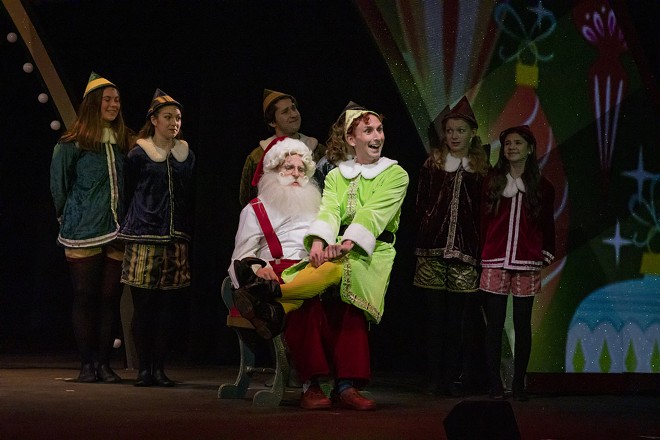 If you're looking for a jumper-cable jolt of Christmas spirit, the movie Elf starring Will Ferrell will certainly tingle your tinsel. And you might think that a live version of that charming story (with songs!) would even be more delightful. And in theory, you'd be right. After all, how can you miss with a warmhearted story about a human-sized Elf who learns life lessons from Santa's elves and then applies that knowledge to life back in big, bad New York City.

In Beck Center's production of "Elf the Musical," most of the elements of the 2003 flick are in place, but the musical struggles to keep this lighter-than-air concept afloat for 2.5 hours. As the story goes, one Christmas a little baby crawled into Santa's bag while he was depositing gifts in a home, and wound up back at the North Pole, where he was named Buddy and raised alongside the elves in their workshop. And over the years, he grew to a gangly human size. As an adult, he learns his real father is a bigshot in the Big Apple, and he sets off to reconnect, dressed in his elf duds of course.

With a book adapted by Bob Martin and Thomas Meehan, augmented by Matthew Sklar's music and Chad Beguelin's lyrics, the version of Elf labors hard and sometimes successfully to capture the magic of the film. In the lead role of Buddy, Tim Allen is tall, thin and giddily irrepressible. At moments, Allen seems to channel the energy of a young Danny Kaye. But since Buddy's backstory about his life at Santa's workshop along with his adoptive elf father are given short shrift, the story lacks the foundation that should fuel most of Buddy's emotional reactions going forward.

Once Buddy lands in Gotham, he visits the publishing house where his father Walter Hobbs presides, and finds that his old man is a real grinch. But that necessary conflict lacks the edge provided in the movie by the performance of James Caan as the dad, who played the role as a slightly less homicidal version of Sonny Corleone. As Walter here, the excellent Greg Violand adds his lush singing voice to the mix but the script never allows him to brandish the level of disinterest/disgust that the characters need to set up their inevitable reconciliation.

Along the way, Buddy meets his siblings Emily (Carolyn Demanelis), bro Michael (Owen Hill), and the snarky Jovie (Maddie O'Brien). One of the high points is O'Brien's song "Never Fall in Love with an Elf," when she questions her feelings for Buddy the elf-man and his constant love for Santa: "How can one ever compete/With a magic guy in a flying sled?"

A lot of the humor in the show is frothy and predictable. But when the authors try to give it a more mature twist to please the parents in the audience, it often just comes out as creepy innuendo (when Buddy starts being attracted to Jovie his, um, tongue gets thick).

The plot gets unnecessarily complicated when we learn that the publishing house is failing until two of Walters' lackeys find a manuscript by the acclaimed writer Chris Smith who once wrote the world's greatest Christmas stories. That will become a book that will save their company! Unfortunately, the "Chris Smith/Christmas" wordplay is repeated several times to make sure everyone gets the limp joke. And then Buddy destroys the manuscript in his attempt to make snow by feeding the pages into a shredder. But, of course, Buddy saves the day by replacing that story with...his own!

The Beck production is handsome, thanks to scenic designer Adam Rowe's talents augmented by the projection design of Brittany Merenda, as her giftwrap and NYC rooftop graphics appear on arcing screens above the stage. And musical director Larry Goodpaster turns in his usual professional job with the 12-person orchestra.

Elf the Musical isn't everything the movie is, and it could be edited to a more child-friendly length, but its heart is in the right place. And it may give you a little jolt of Christmas spirit after all.

Through Dec. 30 at the Beck Center.