The Adolphe Braun retrospective charts the career of a photographer who combined art with savvy entrepreneurship. 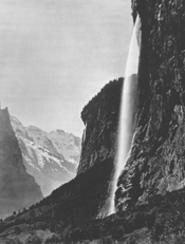 "Switzerland. Valley of Lauterbrunnen," by Adolphe Braun, photograph.
Adolphe Braun was that rare case: an accomplished artist who got rich without compromising his standards. A new exhibit at the Cleveland Museum of Art called Image and Enterprise: The Photographs of Adolphe Braun demonstrates that the 19th-century Frenchman knew what his audience wanted, but didn't merely cater to sentimentality and patriotism. At its best, Braun's work not only records the appearance of his subjects, but also, by juxtaposing detail carefully, creates an aesthetically powerful interpretation of them.

This, the first-ever comprehensive display of the Alsatian photographer's work in the United States, was originally shown at the Rhode Island School of Design (which organized the exhibit). It features 100 photographs that trace Braun's output between 1854 and 1880. His work encompasses landscapes, flower arrangements, Swiss regional costumes, and reproductions of famous pieces of art. Indeed, at the height of Braun's fame, just prior to the Franco-Prussian War in 1870, thousands of his photographs were being circulated all over the globe.

The exhibit is important because it tackles a sensitive issue in the art world. There is a widely held assumption that, if an artist makes a lot of money, there must be something wrong with his art. Such an artist may be a masterful manipulator of media trends, but, the reasoning goes, the ability to cater to the mass needs of the culture has nothing to do with aesthetics and everything to do with savvy entrepreneurship. This argument is not entirely lacking in merit. Popularity doesn't guarantee aesthetic power. However, Braun was able to successfully bridge commercial demands with aesthetic concerns.

At the same time, because he was so tuned in to the demands of the marketplace, his work is a valuable record of his era. It reflects, as an essayist in the exhibit's catalog contends, the social, economic, technological, and political conditions of Second Empire France. But the fascinating thing about Braun is that, even as he ably described the surface values of a subject like the French resort town of Chamonix, he also uncovered the poetic potential of such scenes. In other words, while he was reminding people of the good time they spent skiing last year, he was also alerting them to the beauty of the natural scenery that they may have overlooked during their vacation.

One is initially astonished by Braun's concentration: He lavishes the same skill and attention on a still life of a bunch of flowers in his studio as he does on his dramatic portraits of isolated mountain peaks and cascading waterfalls in the Swiss Alps. There is a reason for this sense of equalized expressiveness: It was all a part of the revolution of Romanticism, which started with William Wordsworth's call for a poetry of common life. Since the 1830s, French art had moved away from neoclassical and historical painting to a growing concern with ordinary things and familiar places. Braun, too, was swept up in these heady currents. Like his contemporary, realist painter Gustave Courbet, he didn't shy away from commonplace subject matter, which earlier French painters like Delacroix would have rejected as uncultured.

A case in point is Braun's "Switzerland. Grindelwald, Upper Glacier, Source of the Lutchine," a photograph taken between 1875 and 1885. The shot depicts a river springing from a glacier. Braun views this glacier not as one of nature's forgotten objects, but rather as a massive edifice consisting of contrasting shapes and textures. Although this sculptural block of ice would scarcely merit attention if one saw it on a hike, Braun immortalizes it by making it the subject of a photograph.

Defenders of culture at the time didn't approve of such images. The rising power of the middle class in mid-19th-century French society was seen by many as a threat to serious art. The poet Charles Baudelaire, introducing his account of the Paris Salon of 1846, appealed to this middle class with flowery language that barely concealed his condescension. "Art," said Baudelaire, "is an infinitely precious good, a draught both refreshing and cheering, which restores the stomach and the mind . . ." This lame argument -- that art is valuable only insofar as it has a practical function -- continues to serve arts advocates today: Describe art as a commodity, and tell the people that partaking of it will refresh the spirit, so that they can return to the office Monday morning with renewed vigor to do truly important things, like trade stock and initiate lawsuits. Novelist Gustave Flaubert (the author of Madame Bovary) had no patience for this sort of mealy-mouthed speech, so he came right out and said that, in his opinion, the nuances and delicacies of art would be perceptible only to a tiny elite. This is what Braun was up against: on the one hand, the disingenuous rumblings of Baudelaire and, on the other, Flaubert's imperious (but at least direct) elitism.

The fascinating thing about Braun is that, amid all this bashing of the bourgeoisie, he clung to the belief that art was good for the middle class. The photographs in this show suggest that Braun saw the cultural leveling process taking place in the society of the Second Empire as an opportunity for artistic growth. The generous sampling at the museum from his 300-plate series, depicting various flowers, shrubs, and grasses, demonstrates a keen awareness for the way photography devoted simply to the documentation of life could also attain a quiet drama. When Braun photographs a bundle of grapes, one does not think of how they might taste or how they will soon be turned into wine; they are full and complete just as they are. When, in "Switzerland. Valley of Lauterbrunnen. Staubbach Falls" (1875), he depicts some isolated mountain peaks and a cascading waterfall, he leads the viewer's eye around the composition by a crisp series of diagonals. We then return to the waterfall, a luminous vertical blur offset by all that textural specificity. This is extraordinary nature photography. Braun here combines precise empirical specificity with an intuitive poetic sense. It's one of the highlights in the show.

Other Braun images don't hold up very well. He could wallow in excessive sentiment. A case in point are his photographic representations of the regions of Alsace and Lorraine (recently ceded to Austria in the Franco-Prussian War). He depicted them as young sisters in regional costumes, sadly gazing toward the heavens, as though mourning the political changes that were taking place. Though wildly popular in their time, these images seem negligible today. The same goes for the so-called "Trophy of the Hunt" photographs of hunting still lifes. These were meant to be framed and hung in prosperous middle-class dining rooms. Though they are carefully arranged (17th-century Dutch still-life painting seems to be the model here), they are formulaic. Pass the pumpernickel.

Last, there are the photographs that Braun took of famous works of art. He worked in such places as the Louvre, the British Museum, the Sistine Chapel, and the Vatican palace. These photographs brought the great masterworks into the homes of the middle class and into the libraries of art institutes. Braun the popularizer was working at full force in this series. These crisply focused, admirably detailed reproductions did a lot of good in their time. To a 20th-century audience, though, they are most interesting for what they tell us about Braun the man. Indeed, this attempt to document the great masterworks suggests a preoccupation with art as a force that can help to create a more humane society.

This idea resonates with the ambitious attempt by another Frenchman, André Malraux, to assemble a "museum without walls." Malraux, French President Charles De Gaulle's minister of cultural affairs and also a novelist, art historian, and adventurer, thought that a book that consisted of photographs of art objects could, if assembled carefully, be a grand museum in itself. In the words of Malraux biographer Axel Madsen, the French Renaissance man thought that, "through photography and modern printing techniques, 20th-century man [could create] an imaginary museum containing the art of all times." Implicit in Malraux's view is the notion of art as part of a quest for human and social progress. A century earlier, this notion also undergirded Braun's quest to photograph the great works.

This exhibit provides a rare opportunity to survey the achievements of one of the 19th century's most enterprising photographers. Braun's work gives us a valuable glimpse into the cultural atmosphere of mid-19th-century France, and it also demonstrates that he was able to be a serious artist while he made lots of money.