Stan Hywet celebrates Father's Day with a tribute to an American classic. 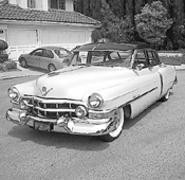 Knight's 1947 black Caddy convertible is one of 350 vehicles that will be on display at the Antique, Classic, and Collector Car Show at Stan Hywet Hall and Gardens on Sunday. It's the 45th outing of this quintessential Father's Day event. And it's celebrating the 100th anniversary of the Cadillac, with vehicle and memorabilia exhibits.

Knight says his convertible used to be in a private museum. He traded his previous car -- a 1937 Cadillac, which he owned for 20 years -- for the current model four years ago. "[The '37] was a nice car, but it was time" to part with it.

As one might expect from a car of this class and vintage, maintenance takes up a sizable chunk of Knight's time. He's replaced valves, bearings, tires, and the radiator. "I've got a little wiring project that needs done now," he sighs. "It sat for a number of years, and you can't do that with these cars."

He doesn't take his classic car out much (he leaves everyday commuting to a Chrysler Concord). It's basically a show auto, as is the 1936 Packard he owns. "[The Cadillac] is easy to drive," he says. "It rides like a modern car."

The Cadillac is indeed one fine ride. But Knight offers a more economic reason for its longevity. "I think it would have succumbed to the Depression if it didn't have [General Motors'] finances," he says. "In a hundred years, it could be Japanese cars" that people collect. Yeah, but can we park them out back and have a party in 'em? We're pretty sure the Boss would have a thing or two to say about that.