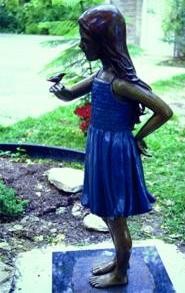 Paula Blackmans Victoria is on view at CSUs sculpture exhibition through June 16.
NEW

Into View -- For 15 years, the Sculpture Center has elevated Ohio artists to greater prominence through its "Window to Sculpture" series. This exhibition of recent work by program alumni is a frank perusal of the high and low points. While the show succeeds in its intent to demonstrate the continued viability and potential of sculpture, many individual cases end up providing evidence to the contrary; there's a lot of overly intellectualized and simply incoherent stuff by artists whose technical mastery is evident, but who apparently haven't yet discovered their message or how best to express it. There's only one sculptor here whose principles of abstraction approach the truly profound: The smooth, interlocking sandstone rings of Bruce Biro's "Duet" are hovering realizations of infinity. They arise from a single base and bend toward each other intimately, yet they never actually touch, like two musicians improvising independently on the same theme. Amazingly for stone objects, they convey a sense of weightlessness, as if they'd float to the ceiling like balloons if they weren't anchored. This is the sort of feat that only sculpture can achieve; one hopes there will always be a venue for it. Through June 16 at the Cleveland State University Art Gallery, 2307 Chester Ave., 216-687-2103, www.csuohio.edu/art/gallery. -- Zachary Lewis

Afrofuturism -- How might technology affect race relations and African American culture? It's an enormous loaded question, but Afrofuturism is thorough and imaginative in its answer. Seventeen artists address the issue in a large and diverse multimedia exhibition from the Obsidian Gallery in Minneapolis. If there's a unifying theme, it's that racial advancement won't be unidirectional; rather, it'll zigzag and reverse, always looking backward even as it moves forward. "Black to the Afro-Future: A Road Map," by Oakland artist Amanda Williams, simultaneously embodies and critiques this theme. Straight red lines of paint and string veer over a black wall like a treasure map, their circuitous paths intersecting at Altoid tins painted to depict stages of black history. Strategically placed text at widely separated points mark "where we want to be" and "where we're supposed to be," suggesting that in reality, racial utopia may be impossible to achieve. But not everything here is so serious: Seitu Jones of Minneapolis injects a satisfying dose of satirical humor with "Noirex," a fake magazine advertisement for a pill that "corrects excessive melanin" -- i.e., turns black skin white. Enjoy the funny before-and-after photos, but also note the fine print that details the staggering side effects, which include "loss of rhythm." Through June 9 at Spaces Gallery, 2220 Superior Viaduct, 216-621-2314, www.spacesgallery.org. -- Lewis

The Birth of Genius -- Unique among the many displays nationwide celebrating the 100th birthday of legendary designer Viktor Schreckengost, this exhibition unveils rare sketches and design concepts from 1924 to '29, when Schreckengost was a student at the Cleveland Institute of Art (where he would eventually become the youngest faculty member in school history). In lieu of later masterpieces, the show features early school projects masterfully executed across a staggeringly diverse range. Whether sketching the human figure, designing a lamp, or conceiving a mural, Schreckengost excelled in every artistic attempt, lofty or mundane. He accomplished his task with unwavering finesse, understanding, balance, and attention to detail. A highlight among the figural sketches is "Nude Seated Female": Straight lines are nowhere to be found on this drawing of a seated woman -- only dynamic curves that set her in palpable motion. Perhaps the strongest harbinger of Schreckengost's design career is "Decorative Figure in Porcelain." Form and function unite stunningly in this design for an Art Deco statuette, its arched arm and flowing hair merging into a column that completes and supports the figurine. Of course, even the best of us has a bad day occasionally. Schreckengost's came during his sophomore year, when he sketched a male figure and apparently tried later to change its sex, adding breasts and bobbed hair with little success. But it's still a Schreckengost, and even this awkward piece has undeniable flair. Through August 18 at the Cleveland Institute of Art, 11141 East Blvd., 216-421-7403, www.cia.edu. -- Lewis

Florescence -- Emerging from a realist period, local painter Dana Oldfather fills her first solo exhibition in Cleveland with new "existential studies" exploring the complex and intrinsically contradictory nature of womankind. Her subjects, painted on board in flat, solid colors, are almost all variations on today's ideal of beauty: tall, thin, blonde or brunette, and stylishly dressed in low-slung pants and tight-fitting shirts. But the similarities end there. Each image represents a unique and intriguing blend of opposites. Physically, the women's skin looks soft, while their features and bony frames are angular and harsh. Their attitudes are even more enigmatic: They evade connection with their surroundings with averted eyes and disengaged postures, but it's hard to tell whether they're absorbed in thought or simply self-absorbed; either way, they are islands of calm. In "The Four," we see four women, their backs to one another, working in a kitchen either in icy silence or at a familial hum. Oldfather's subjects appear either caring or cruel, depending on the viewer's interpretation; the anguished man in "Carolyn Reclining" may be receiving close, thoughtful attention from his blond companion on the couch, but more likely he's being tuned out. The most touching scene here, "Cotton and Breathing," is a solo portrait. An orange-haired woman of exceptionally delicate frame pauses on the street, her hand on her chest. Maybe she's just catching her breath. Or maybe this proud but fragile creature is overwhelmed with a feeling we can only imagine. Through June 24 at E Gordon Gallery, 2026 Murray Hill Rd., 216-795-0971, www.egordongallery.com. -- Lewis

Smooth/Striated -- Technically, it wouldn't be impossible to wear these tiny, finely crafted works of art by Northeast Ohioans Sofia Calderwood and Susan Skoczen as actual jewelry. But wearing them would complicate the task of paying these intricate marvels the close attention they deserve. Calderwood's nature-inspired bracelets and necklaces are less practical than Skoczen's essentially functional rings, but they're significantly more seductive. Setting aside her usual metal, Calderwood fills her imaginative molds instead with semi-transparent white plastic -- the "smooth" half of the title. In "White Frond," this luminescent substance takes the form of thin ropes tightly braided into a thick bracelet, a few purple-tipped strands fraying from the loop. It'd be a ticklish piece to wear -- one that seems alive with motion, like an anemone swaying in an imperceptibly light current beneath the sea. (Gallery M's display cases -- oblong glass boxes with sturdy metal frames, like 19th-century aquariums -- heighten this sense of being underwater.) Back on land, Calderwood again uses plastic for a necklace lined with white daisies. There's a compelling innocence about this: It's easy to imagine a little girl plucking flowers and stringing them together in much the same way. A block motif unites many of Skoczen's rings: Thin, exceptionally delicate tendrils of gold and silver support large, sometimes humorously top-heavy ornaments. Her imagination and craft are uniformly powerful, but it's the rare flash of color -- such as the three small patches of orange felt atop the mushroom-shaped "Nestling About" -- that distinguishes her most fetching pieces. Through June 2 at Gallery M, 1667 East 40th St. Suite 3-B, 216-773-8277. -- Lewis
Scroll to read more Arts Stories & Interviews articles