Send a News Tip
On View 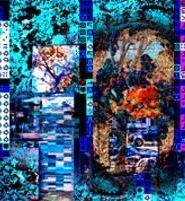 Alight Here -- The terms "exhibit" and "installation" fail miserably to describe Alight Here, by Londoner Jennifer Wright. More accurately, it's a tight-knit environment, designed and constructed with phenomenal care to challenge the eye and mind. The project stems from a photo taken from inside the storefront gallery, looking out on a fairly mundane scene of houses, trees, and parked cars. But the way Wright manipulates this scene is anything but mundane. An embroiderer primarily, Wright translates the image into the symbolic language of cross-stitch -- color-coded squares akin to video pixels. Large, backlit panels of cross-stitch cover the windows, simultaneously mimicking and blocking out the world outside, but also illuminating it like stained glass, especially at night. Inside are two more pieces: a wall hanging and a "rug." The wall piece is another translation of the street photo, a swirling, swooning combination of photography and embroidery, all magically relayed on canvas. It resembles a corrupt frame on a DVD; standing between it and its pixilated cousin on the window is like being inside a computer monitor, witnessing a signal become an image. It's a smart simulation of perception and a stark juxtaposition of the slow, labor-intensive art of needlework and today's speedy technology. The floor piece renders the photo in more traditional, low-tech terms, in the style of a Persian rug. But even this gets the modern touch, as Wright composes the rug out of tiny, mass-produced plastic beads, in the grain-by-grain way a Buddhist monk constructs a sand mandala -- an effect not unlike embroidery. Not only is it an amazing achievement; it's the glue that holds together this unusual but profoundly affecting display. Through August 20 at Raw & Co. Gallery, 1009 Kenilworth Ave., 216-235-0635, www.rawandcogallery.com. -- Zachary Lewis

No Surf in Cleveland -- This diverse, ample show, drawn from private collections and organized by the skateboarding collective known as the Public Square Group, uses amateur and newspaper photos to document skateboarding's local history. More than anything, it underscores how widespread the sport has become since 1968, when newspapers first embraced it as a hot new phenomenon. Skaters are shown here in every imaginable environment, from the specialized parks common today to such potentially illegal arenas as streets, parking lots, and playgrounds. Some of the most artistic, carefully composed images (made by someone named Gabby) take us inside shadowy skating tunnels, which may or may not be construction zones. The second major theme conveys how little skateboarding has changed: Every era favored its own fashions, protective gear, and trick maneuvers, lending fresh looks over the years, but the essence of skateboarding -- taking risks and showing off, not to mention the sheer fun of it -- is timeless. Through July 30 at Bela Dubby, 13321 Madison Ave., Lakewood, 216-221-4479. -- Lewis

The Dressmaker and the Tailor -- Cleveland artist Brenda Stumpf logged countless hours creating this 10-piece series of abstract collages, but the intriguing, mysterious end product looks decades old. Ambiguity is the driving force: Stumpf contrasts textures, shapes, and colors in ways that are playful, but also enigmatic. The most active ingredients are old, faded dress patterns -- veritable artworks in their own right (and relics, certainly, in our mass-produced world), with their complicated systems of lines and symbols. But Stumpf also uses light-blue oil paint and dried, splayed-open tea bags, their former contents evidenced by circular light-brown spots. All of these lie beneath applications of translucent wax, like an ancient, hoary residue or some sugary icing. Whatever meaning there is stems from the materials themselves, from the deliberate, purposeful redeployment of single-service household goods for completely vague, aesthetic ends. Stumpf avows no specific narrative behind Dressmaker, and the lack of concrete footholds is a weakness. But the 10 works are definitely all of a piece, like so many different perspectives on the same project -- one that's either actively under way or was abandoned long ago. The title suggests clothesmaking, but the images could just as easily be interpreted as faded blueprints or newly unearthed plans for a spaceship. Through August 12 at Brandt Gallery, 1028 Kenilworth Ave., 216-621-1610, www.brandtgallery.org. -- Lewis

Form and Sounds -- Musical expertise isn't required to appreciate these visceral new paintings by Clevelander John Howitt, though a basic understanding helps. An ardent fan of jazz and classical music, Howitt translates profound musical principles and gestures into a comparably abstract visual language based on contrasting shapes, textures, and colors. Looking at these variously organized or chaotic compilations of dots, bars, and florally arcing loops is like reading musical scores: Whole compositions take shape in the mind, as figures strategically placed on canvas conjure sounds of discrete lengths, pitches, phrasings, and volumes. (There's even suggestion of melody and accompaniment in the tension between upper and lower fields of activity, or between distinctly colored and textured foregrounds and backgrounds.) Two of Howitt's idols are free-jazz exponents Ornette Coleman and Sun Ra, which explains the loose, improvisational quality in much of his work. Likewise, Howitt tends to favor bright -- in this case, loud -- colors that stand out easily. But there are exceptions aplenty to both rules. Evenly distributed, cascading loops in "Spiritual Intimations" successfully imitate the light, deliberate touch of classical pianist Mitsuko Uchida (to whom it's dedicated), while the salmon pink and dark blues and greens in "Ode to Joni Mitchell" readily suggest the singer's calm, soothing voice. Howitt isn't the first artist to link sight and sound, but he's one of the few to do it so well. Through August 4 at E Gordon Gallery, 2026 Murray Hill Rd., 216-795-0971, www.egordongallery.com. -- Lewis

On the Flip Side -- Cleveland Institute of Art professor Sarah Kabot wields a sharp knife with exceptional precision, yet it's her quirky perspective that leaves an even deeper impression. These works on -- and in some cases of -- paper coach viewers to see the physical world as a compromise between positive and negative space. The show starts out small and then leaps to the gigantic. Virtuoso pieces "Blank" and "Grid" are sheets of college-ruled and graph paper, whose blue lines have been surgically extracted. It's as if Kabot magically yanked out the paper parts, leaving nothing but thin veins of ink suspended in midair. The knife cuts the other way in an untitled photo of two trees with overlapping branches. Kabot leaves intact the part of the photos showing the trunks, but she carefully carves away the empty blue sky behind the branches. The startling effect is of two hands reaching out for each other -- a clear allusion to the central image in Michelangelo's "Creation of Adam." If Kabot has a thing for Michelangelo, "Reverse" must be her version of the Sistine Chapel. A floor-bound mirror image of the gallery ceiling, the room-size installation is an exact, paper-made replica of functional objects -- ductwork, lighting, and structural supports -- designed to be ignored. It's a stupendous technical accomplishment, but it's also a plea from an artist who would have us observe and engage with our surroundings more completely and profoundly. Through August 20 at the Museum of Contemporary Art, 8501 Carnegie Ave., 216-421-8671. -- Lewis

The Persistence of Geometry -- The subject you hated in high school, you'll embrace here: Geometry is the conceptual glue that holds together this mammoth exhibition underscoring the agelessness of pattern and repetition in art. New York curator Lowery Stokes Sims observed few limits in mining the show's contents from the collection of the Cleveland Museum of Art; it touches on pretty much every major culture, period, and medium -- from paintings and sculpture to pottery and tribal masks -- with emphasis on the 20th and 21st centuries. Those who've spent time in CMA's modern wing will see many old friends, including works by Pollock, Close, Motherwell, LeWitt, Siskind, Bearden, and Miró. Few of these people had geometry on their minds at the moment of inspiration. More often, geometric shapes and patterns are the means to other ends; they become significant only in their visual context. As with the Barnes Collection in Philadelphia, the raison d'être of this exhibit is the pairing of objects whose only real link is a similar design motif. At worst, those connections are brilliant: a minimalist seascape by Hiroshi Sugimoto next to Brice Marden's color-field masterpiece "Sea Painting," for example. At best, they're downright spine-tingling. The most electrifying instance must be the ancient Egyptian weaving from 400 A.D.: Its tightly knit checker pattern is reflected in a porcelain Chantilly teacup from 1760 and in a high-resolution silver print of a sunflower from 1960. Presented together, they are almost more than the brain can handle. Through August 20 at the Museum of Contemporary Art, 8501 Carnegie Ave., 216-421-8671, www.mocacleveland.org. -- Lewis