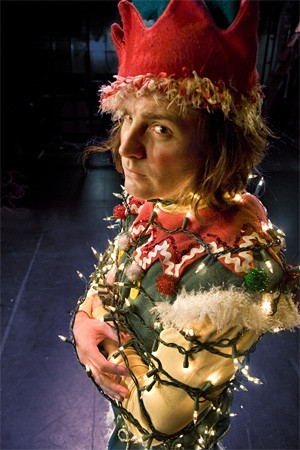 Beauty and the Beast — Back for its third and final appearance, the Beck Center production of this Walt Disney epic hasn't lost any of its charm. Dan Folino is still comically shivering as the Beast, and Natalie Green will warm any little girl's heart as the beauteous Belle. Even though the show is almost three hours (with intermission), the small fry stay glued to their seats, thanks to Fred Sternfeld's lively staging and the bright choreography by Martin Cespedes. And the kids (not to mention oldsters) have a great villain to laugh at in Josh Rhett Noble's Gaston, a muscle-headed doofus for the ages. More humor is added by smooth Larry Nehring and tightly wound Douglas Collier as the anthropomorphic candelabra and grandfather clock, respectively. As always, the Beck voices handle Alan Menken's music and the lyrics by Howard Ashman and Tim Rice with élan, leading to the fairy-tale conclusion, which can still bring a tear. And if you have small ones in tow, be sure to let them see the characters up close after the final curtain, in the hallway outside. The expressions of wonder on the kids' faces are worth the price of admission. Through December 30 at the Beck Center, 17801 Detroit Avenue, Lakewood, 216-521-2540. — Christine Howey

A Christmas Carol — Yes, Charles Dickens was a hell of a writer, but he could be a tad verbose. So it's convenient that there have been so many great stage and screen versions of his classic ghost story. One of them — required viewing for anyone with a Netflix membership — is the 1951 movie starring Alastair Sim as a Scrooge for all eternity. And the other is this Great Lakes Shakespeare Festival production, which never fails to engage and delight. Framed cozily as a story within a story in this Gerald Freedman adaptation, the production really comes alive once the ghost of Jacob Marley (Lynn Robert Berg) appears, dragging his chains and creaking eerily with every movement. Dudley Swetland's Scrooge is plenty nasty, and he manages quite a giddy transformation once the Christmas spirits have worked him over. There are also sparks of invention from Andrew May's staging and small but stellar performances by Aled Davies (his Topper is a hoot) and David Anthony Smith as a towering Christmas Present (pun intended). This annual tribute to knee-jerk liberal sentiments like compassion for the downtrodden is always a must-see, whether you've seen it before or not. Through December 23, produced by the Great Lakes Theater Festival, Ohio Theatre, Playhouse Square Center, 1511 Euclid Avenue, 216-241-6000. — Howey

Christopher Columbus or (Did You Say Sphere?) — Let the title be your tip-off that this isn't your usual theatrical enterprise. Written by the fervently avant-garde Belgian playwright Michel de Ghelderode and presented by Cesear's Forum, this dramatic fairy tale is exuberantly unhinged. Columbus, played by a wacky but consistently charming John Kolibab, seeks escape from the droning world and sets off to find his Eden. But he is beset at all sides by craven royalty, grasping natives, and obfuscating intellectuals rendered creatively by Robert J. Williams, Nancy Telzerow, and Vincent DePaul. This is the kind of show that allows the director to go nuts with theatrical gamesmanship, and Greg Cesear adds plenty of fun, including a soap-bubble gun. But the whole piece is swamped by the oppressive presence of one performer, Jean Zarzour, who acts like she's doing a lounge act — if Motel 6 had a lounge, that is. Portraying different women, she uses the same insufferable mugging and tired comic shtick for each "character." She also apparently believes that revealing her matronly cleavage is drop-dead hilarious. If you can filter her out somehow, there's a delicate and defiantly skewed play trying to take wing. Presented by Cesear's Forum at Kennedy's Down Under through December 16, 1618 Euclid Avenue, 216-241-6000. — Howey

Demon Baby — In moments of stress, we all turn to one thing or another (a good friend, a long nap, a bottle of Ketel One) to find solace. But in this play, children's author Wren finds herself psychologically shifted by the appearance of a "demon baby," a garden gnome who sits on her chest, cackles, and issues random questions. Wren has recently moved to London, where her hubby, Art (Tom Kondilas), has been relocated. Trouble is, she isn't having much fun — not in her flat, where she's afraid the nearby construction workers are staring at her, nor with Art's boring, artificial co-workers, Cat (a sharp and funny Amy Bistok) and Charles (Arthur Grothe). The elements are here for an amusing fling, but Erin Courtney's script consistently sacrifices idea-development for momentary wit, dooming the hour-long show. Dawn Youngs is remarkably believable as Wren, given the slender threads she's given to act, but neither she nor Wes Shofner (as the remarkably credible-looking gnome) can give this fluff any heft. First-time director Geoffrey Hoffman keeps the pace brisk, but he can't turn this Baby into anything other than a semi-intriguing irrelevancy. Through December 22, produced by Convergence-Continuum at The Liminis, 2438 Scranton Road, 216-687-0074. — Howey

Pulp — The storyline of this show will seem familiar to anyone who has ever thumbed through an old novel by Ann Bannon, considered the doyenne of old-school girl-on-girl fiction. Terry Logan (an impressively dude-like Maggie Arndt) is a small, slim butch gal traveling to Chicago. She meets up with a young woman, Pepper, who happens to work in a lesbian bar called The Well. Soon Terry is sharing sensuous glances with Eva Malone, a girl with a quick lip and a quicker, um, tongue who waits tables in the saloon. But the most compelling creature is Viviane Blaine, the elegant and refined owner of the bar, on whom Terry locks and loads from the moment they meet. Trouble is, Viv is an ice queen, and Terry can't melt her frosty facade. Under the pitch-perfect direction of Scott Plate, the performers channel old movie stars and other camp sources to craft their characters. As Viviane, Alison Garrigan is a combination of Bette Davis and Lauren Bacall, with a little of drag legend Charles Busch for good measure. Whether she's vamping in the doorways or giving advice about talking in the morning ("Before caffeine, only silence."), Garrigan is a sultry-voiced treasure. And her renditions of a couple original, bluesy songs — with lyrics by the playwright and music by Amy Warren and Andre Pluess — are surprisingly evocative. But Sheffia Randall Dooley, who plays Eva, almost runs away with the show, nailing each line like a human air hammer. All in all, this Pulp has the juice: hilarious in many places, with everyone happily paired up at the end. Through December 22 at the Cleveland Public Theatre, 6415 Detroit Avenue, 216-631-2727. — Howey

Reflections — In its short time in Cleveland, Kalliope Stage has forged a reputation for mounting imaginatively staged musicals featuring a collection of great vocal talent. Even so, it is facing some serious funding problems, and those issues may be affecting the work onstage, if the current production is any guide. Billed as a cabaret offering of jazz favorites, the five-person singing crew looks like they've shown up for a colonoscopy rather than an evening of great tunes. It's not that they don't smile; there are pasty smiles in profusion. But there is no chemistry among the performers, who dutifully shuffle center stage for their assigned bits and then return to their seats. Occasionally rising above this musical miasma, directed by the usually excellent Paul F. Gurgol, are Liz Rubino and Kris Comer, who actually act the songs they're singing and inject some passion into the proceedings. Rubino's "Stormy Weather" and Comer's "I Got It Bad" are definite highlights. But Jared Sampson, Chris Pohl, and Katrya Oransky-Petyk either overact or don't bother at all, leaving their tunes gasping for an injection of creative phrasing or, at times, simply the right notes. A sad effort from a superior company. Through December 15 at Kalliope Stage, 2134 Lee Road, Cleveland Heights, 216-321-0870. — Howey

The Santaland Diaries — It's a good thing that Cleveland Public Theatre mounts this play every Christmas season, to remind us that bitchiness and sarcasm still have an honored place in our sugarcoated holiday traditions. The David Sedaris essay, which morphed into a one-hour playlet, has all the signature elements of this writer's approach to humor, which can best be described as twisted. How else to describe a hired elf named Crumpet, in Macy's New York City "Santaland," who riffs on the unhygienic condition of elf tights, visiting groups of retarded youngsters, and a gay elf named Snowball, who flirts with all the other elves and even a few of the Santas. This year, the curly-toed shoes are worn by Doug Kusak, who starts off as a predictable curmudgeon, reeling off his lines with the forced conviction familiar to staged readings. But he soon warms to his task and eventually embodies the Sedaris snark. Although his Billie Holiday impression needs a lot of work (it sounds more like Billy Eckstine being garroted), Kusak and director B.D. Bethune fashion an easygoing show for those who insist on a dash of bitters with their eggnog. Through December 22 at the Cleveland Public Theatre,6415 Detroit Avenue, 216-631-2727. — Howey

We Gotta Bingo — This is an audience-participation play — think Tony and Tina's Wedding, but substitute Bingo Night for Wedding Night. Basically, St. Patrick's church has been demolished by mistake, so two Catholic churches have combined to throw a bingo fund-raiser, and you're invited. Here's the problem: This kind of church affair has none of the emotional horsepower that a wedding does. Moreover, the dialogue and songs range from mediocre to total crap, despite the relentlessly upbeat performers, who manage to elevate the material to sporadically amusing. And before any bingo is even played, plenty of bad jokes must be endured as members of the cast roam the room, chatting up the audience. On stage, large Patrick Ciamacco is a force to be reckoned with as Bucky. And June Lang as Rosa adds some barbed commentary about the Irish interlopers. Director Ross Young also keeps the energy at a fever pitch, and the room is decorated up the wazoo with kitschy wall hangings and a proscenium-mounted fraulein lugging a tray of frosty beer mugs. But this premise needs some witty writing — at least snappy enough to equal the talent of the performers — before anyone can verifiably shout "Bingo!" Through December 15 at the East 14th Street Theatre, 237 East 14th Street, 216-241-6000. — Howey