The blind lead the emotionally crippled in the funny Raised in Captivity. 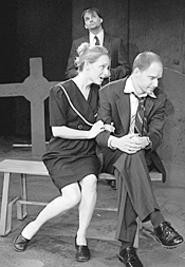 As sibling wackos, Tyler and Tyson Postma (foreground) head a talented cast.
Life is like a pinball game. You're launched through a narrow chute and bounce from one bumper to another (family dynamics, personal identity, relationships, jobs), earning pointless points and trying to convince yourself you're doing well. There are some narrow escapes when you tap the flipper buttons (life changes), rocketing yourself off in unexpected directions that you hope will save your butt from the dark depths. But eventually, the shiny silver ball of your existence slips down the hole, and you're gone. Game over.

To make it interesting, our personal pinball life-games are hooked up with those of all the other people we know, who are working their own flippers like crazy and trying to get the most out of their short, noisy time on this side of the grass. It can all be pretty damn confusing, but playwright Nicky Silver is something of a pinball wizard when it comes to sketching out the manic twists and turns of our dysfunctional lives. In his play Raised in Captivity, now at Dobama Theatre, he puts seven balls in motion; these seven lives carom off each other and their surroundings in surprising, poignant, and often amusing ways. And thanks to a talented Dobama company, the evening rings up a bonus-point score.

We first meet adult twins Sebastian and Bernadette, reunited at the funeral of their mother, who was killed in her tub by a water-propelled showerhead. Sebastian is a desperately poor and neurotic gay man, who hasn't recovered from the death of his lover from AIDS. Meanwhile, Bernadette -- a borderline bipolar woman with serious body-image issues and a misguided sense of what's appropriate (she once sang "This Could Be the Start of Something Big" at a funeral) -- is married to a dim-bulb, tooth-hating dentist named Kip, who aspires to be a painter. Hillary is a psychologist who blames herself when Sebastian says he's ending his multiyear therapy regimen; she proceeds to blind and mutilate herself to cleanse her worthless and fetid soul.

These weird folks are rescued from stock-wacko-character hell by the playwright's clever use of language (Sebastian, describing his inability to move on: "I am inertia given human form.") and by director Russ Borski's decision to play the mounting absurdities with deadpan seriousness. Not only does this increase the humor; it lets us see the wounded humanity behind the characters' insane antics.

In a desperate effort to connect with someone, Sebastian begins a pen-pal relationship with a convict, Dylan, and tries buying an evening of respite with hooker Roger (given a dispassionately cruel turn by Jeff Staron, who also plays Dylan). When it comes to oral activities, Sebastian is more interested in conversation than blow jobs, and Roger winds up mugging his john, cutting Sebastian's throat in the process. Losing blood fast, Sebastian is hectored by the ghost of his dead mother, Miranda, who appears -- lethal showerhead in hand -- to tell her son some shocking details about his past. Eventually Sebastian recovers, teaches Bernadette's infant son to walk, and sets off on a new course, along with Kip and the walking collection of miseries that Hillary has become.

The talented cast is led by real-life twins Tyson and Tyler Postma. Lanky and off-handedly natural, Tyson Postma orchestrates Sebastian's irritating shortcomings into a symphony of human frailties -- and his dry delivery of Silver's bizarre one-liners is ideal. Faced with the difficult role of the self-doubting, shrill, and frequently hostile Bernadette, Tyler Postma rises above a rocky start and actually makes Bernadette quite affecting. Juliette Regnier is double-cast as Miranda, but her self-abusing Hillary is a virtual swamp of human need, a character that symbolizes the core problems facing everyone in this untidy universe. As the rather addled but well-meaning Kip, who paints all-white images so that no one can see his mistakes, Sean Derry seems totally malleable, until he sees the light.

In addition to lending his wise directorial guidance, Borski also designed the spare but effective set and lighting. The only glitch is an easygoing pace in spots that softens the comedic momentum of Silver's words.

At the end of the play, one character is looking everywhere for Hillary, afraid that she has disappeared, when another wryly observes, "She's a blind woman. She's standing on the front lawn." This "How far could she go?" gag gets a deserved laugh, but Silver's meaning behind it is clear. No matter how lonely and impaired we feel, we're standing only a few steps away from each other. If only we could learn to see, reach out, and touch.