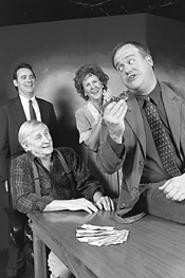 How the hell did we wake up and find ourselves stuck in the viscous tendrils of Dick Armey's wet dream? For years, the GOP congressional leader and most other Republicans have fought tirelessly for the rights of giant corporations and Americans in the top 1 percent income bracket. And now, presto, it's all come true! The assets of employees and middle-class shareholders are being plundered, while one-percenters such as the Rigas, Kozlowskis, and Skillings take perp walks to cosseted retirements in their mini-San Simeons.

This is the reality that has transformed the play Other People's Money into a quaint period piece. Written by Jerry Sterner in 1989, it pits the plaid-shirted founder and owner of New England Wire & Cable, Andrew "Jorgy" Jorgenson, against Lawrence Garfinkel, a slick, hostile-takeover gunslinger.

Sterner's stage play is more darkly satirical than the sanitized Danny DeVito film version. The Bronx-based Garfinkel is Gordon Gekko with a fiendish laugh and a major doughnut jones. He is a sweaty heap of a man, with untrammeled lusts for money, women, and food, and he pursues each with slavering gusto. His prey, Jorgy, is ramrod-straight and idealistic.

As leech and lecher Garfinkel prepares to devour the hapless wire and cable outfit, Jorgy's assistant/paramour Bea calls upon her hotshot lawyer daughter, Kate, to rescue the business. A relationship between Kate and Garfinkel then ensues that offends and surprises, by turns, until the shareholder meeting showdown and the darkly humorous denouement.

Despite the potential in this material, Ensemble's production goes Chapter 11. One problem is that today's real corporate sleaze has far outdistanced the comparatively minor abuses dealt with here, making the play seem dated. When this play was written, more than a decade ago, we thought of Ivan Boesky-style raiders as vicious corporate cannibals: They sucked up shares of vulnerable companies in order to take them over, sell them off, and provide a windfall for investors. But the recent parade of CEO terrorists has made the stock jugglers of the late '80s, like Garfinkel, look like nothing more than three-card-monte dealers.

The second and more vexing problem in this production involves the casting of Kate, the firebrand lawyer who is the linchpin of the plot. She is the conduit for the parallel power games of corporate control and sexual desire, so she must possess a steel fist in a cashmere glove -- in order to manipulate Garfinkel's sundry appetites for her own ends.

Unfortunately, Kat McIntosh, who plays the role, loudly machine-guns her lines as if she is speaking to phantom people in unseen adjoining rooms. This high-speed/high-decibel approach virtually eliminates any subtlety from her character, and she mugs her way through scenes that require more nuanced interpretations. By mistaking volume for strength and misapplying her considerable energies, McIntosh turns this black comedy dishwater gray.

On the positive side, Michael Raum's Garfinkel is a throbbing libido in a shiny suit. A somewhat stouter doppelgänger for actor Michael Chiklis (The Commish, The Shield), Raum captures the essence of the play. His sleazy stock-market maven character is an unusually juicy role, and Raum is Milken it for all it's worth. The less showy part of Jorgy is played by Ron Newell with steady New England resolve. The smaller roles of Bill Coles, Jorgy's longtime business associate, and Bea Sullivan are handled adequately by Charles Kartali and Dawn Pierce, respectively.

Lucia Colombi, usually a smart and surehanded director, softens the satirical edge the play needs by working the pace too fast and spending too little time on character development. The neatly bisected set works well to frame the dual power struggles, but couldn't someone have found a classier desk for über-raider Garfinkel than his tiny plywood box?

Of course, it's not playwright Sterner's fault that his view of big-money villainy has been dwarfed by The Attack of the Billionaire CEOs. But for any investors or pension-plan-holding employees who've lost 40 percent of their net worth in the last couple of years, Larry Garfinkel would have been a welcome sight indeed. Doughnuts and all.