Cleveland Artists Bring all the Fabulism to the Yards 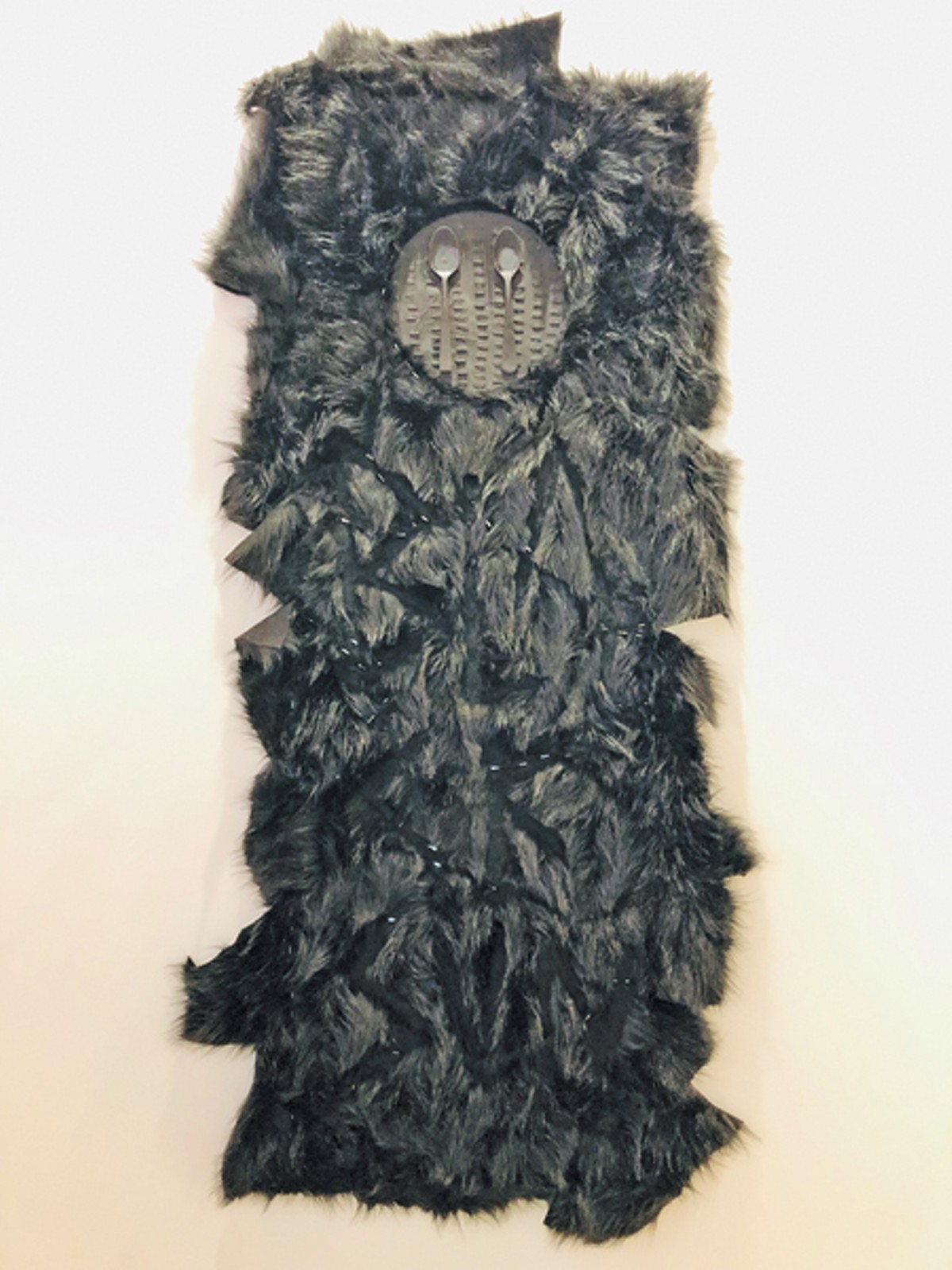 Walking into Fabulism: Meta Fact and Fictions, on view at the Yards through the end of June, is akin to riding a motorcycle through the canyon of our individual and collective myths. Curated by Liz Maugans, the exhibition's works break down and rebuild as the participating artists experiment and evolve their modus operandi.

Meng-Hsuan Wu's "Passage" has humanoid trees uprooting themselves and moving swiftly, and frighteningly, in fantastic formation. Arabella Proffer goes full Jules Verne by bringing her "Biomorphic Garden Party" to the Yards with an exploratory voyage through micro universes. Claudio Orso's chunky woodcuts coax us into a different world. Antwoine Washington's intense and fragile series of portraits shore up the "meta fact" angle of Fabulism by presenting facts and fictions built around the African American community with his drawings: "Powernomics (Woman)," "Multi Ethnic Destruction in America (M.E.D.I.A.)" and "Powernomics (Man)."

Dante Rodriguez, well known for his beautifully serene portraits that investigate personal identity, is creating work that is even more internal. This is by no means navel gazing. What Rodriguez brings to the table is thought provoking and a gorgeous leap into new materials. In our interview with the artist at the opening reception, he enlightened us about his Black Sun series, specifically "Black Sun: Self" (pictured). States the artist, "Black Sun, what the 16th- to 17th-century alchemists called 'Sol Niger,' was recognized by Carl Jung as symbolic of transformation of the soul. He saw the black sun as a way into the subconscious to illuminate a deeper understanding of the self. During the last year and a half, I went through a dark period of my life: personal transitions, me and my adoption status, my marriage, among other things."

What will really blow your mind is that these artworks are not what they seem. We truly believed this new series was constructed with rubber. "Black Sun: Self," Rodriguez informs us, is the self portrait of his conscience using charcoal mixed with linseed oil on Yupo paper. He added elements like spoons, positioned in such a way as to look like tears streaming down its face. "I'm just trying to get deeper into myself," says Rodriguez. "So the fur ... I've been experimenting with new materials, how to draw, how to cut into it, so this is more of a tactile piece. For seven and a half months I had no partner. I was on my own, so I've been feeling like a lack of touch in my life. So these pieces are more about touch. I'm trying to push drawing."

Perhaps one of the best outpourings in Fabulism is Laura Ruth Bidwell's two portraits of Kyle Kidd of the band Mourning [A] BLKstar. "KK Camelias_8658" and "KK Ivy_8633" are everything. "The two photographic portraits in this show are about beauty and abundance. There is a created fiction in these images, but there is also much truth," explains Bidwell in her artist statement. Bidwell completely captures the essence of KK, who exudes not only the beauty and abundance that the photographer references, but also the fire of fierce creativity and identity; they are framed, but they cannot be housed in a box.

Omid Tavakoli's dreamlike "Birds of Paradise" series excavates the anxiety and pressures of females using the dress as a metaphor. He has included an installation using silks that were featured in his recent MFA thesis at Kent State University. Thanks to a sublimation dye printing operation, where the dyes are actually locked into the silk, the material can be washed and dried like actual dress fabrics.

"I'm bi-racial," says Tavakoli. "The other side of my family is Iranian and I'm always thinking about the struggles and the pressures that Iran is putting on their women."

Within "Azure (Fire) Pr/Ey (Pray)," Tavakoli has produced a virtual sea of Iranian women at prayer in a mosque each wearing a large veil wrapped around her body and head; only the face is showing. "These women are in prayer but also being preyed upon in their own culture, and then there are references to fire. A lot of women are killing themselves through self-immolation, but it also symbolizes the flame that arises through the strength of feminism."

We have long loved Kristen Cliffel's ceramic sculptures. Her piece, "The Golden Question," is one of the best we've seen on view this year. The words "pretty" and "please" are laser cut in plexiglass; light bleeds through, causing a shadow play that repeats the words onto the birch plywood that lies beneath. Then there's the gold lustre over low-fire clay flowers and the gold leaf. This exploration into "domestic mythologies" is what keeps us enraptured with Cliffel's work.

As Maugans puts it, "The artists offer diverse outcomes of exploration for our own escape into dreamscapes, future worlds, revisionist fairy tales and heightened details of new realities."

Oh yes, they have brought it all to the Yards.