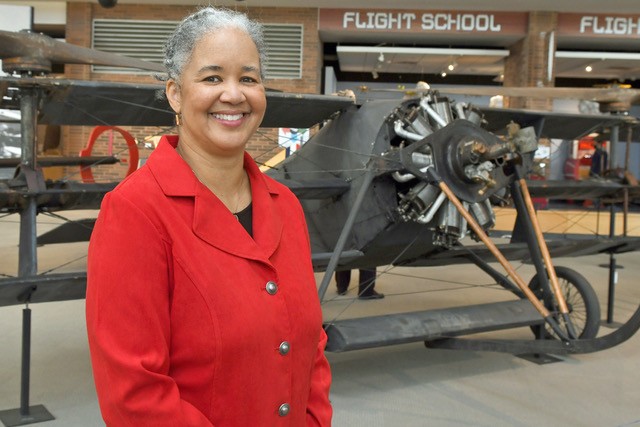 As Women's History Month comes to a close, the International Women's Air & Space Museum (located in the terminal building at Burke) will welcome U.S. Air Force Lt. Colonel (ret.) Monica Smith for "Researching Black Women in Aviation: Barriers and Breakthroughs," the latest in its catered "Dinner With a Slice of History" series.

Black women aviators have largely been omitted from history books, and it has proved challenging for historians to research and document their identities and achievements. It's taken time, energy and perserverance by historians like Smith to unearth their stories.

A big part of the IWASM's new DEAI strategic plan is, "sharing the stories of women who are often left out of our history books," said executive director Sara Fisher.  "Everyone knows the name Amelia Earhart, but very few know about Rose Cousins, Bessie Coleman, Dorothy Darby, Willa Brown and other women of color. This program is just one of our first real steps in our work to provide a safe and welcoming space to share the experiences and stories of women who until now have been left out of our historical narrative.”

While Bessie Coleman's famous barnstorming debut in 1922 inspired a generation of young female and young Black female aviators, Coleman herself had to go to France to study aviation due to her race and gener.

A D.C. native, Lieutenant Colonel Smith holds a Master of Fine Arts in Creative Nonfiction Writing from Goucher College, a Master of Arts in Teaching, and a Master of Public Administration. Her MFA thesis surveyed the first fifty years of African American aviation. She has amassed over 3,400 military flying hours while in the military, has flight experience in more than a dozen military and civilian aircraft, is a Verville Fellow, and led the Military Women Aviators Oral History Initiative. Smith edited newsletters for the 39th Flight, Daedalians (a fraternal organization of military aviators), and The East Coast Chapter of Tuskegee Airmen, Inc. Her articles have been published in The Washington Times digital magazine, American CurrentSee, and The AFRO American Newspaper.

Smith has made it her mission to document and share the stories of these remarkable women. Both IWASM and Smith also aim to inspire young woman to pursue careers in the science, technology, engineering and mathematics (STEM) fields.

“We're firm believers in the adage 'it's hard to be what you can't see,’" said Fisher. “So, we hope that through this event and those we host year-round, that young women, girls and boys can see how integral women are in STEM.”

IWASM has been hosting events like these for the past six years and even during COVID shut-downs they continued to host virtual events. The non-profit organization, with support from Cuyahoga Arts and Culture, has a clear mission to collect, preserve, and showcase the history and culture of women in all areas of aviation & aerospace.

“IWASM has been in Cleveland for over 20 years, and it's still shocking how many folks visit who say, 'I've lived in Cleveland my whole life and never knew you were here!'" said Fisher. “We want to change that. We're a small, yet mighty organization who is doing everything we can to show all of our communities how important women are and the lasting impact they've had on both aviation and aerospace.”

The museum offers a variety of programing including guided tours, adult speaker’s bureau programing, boxed lunch & learns, children’s programs and even offers a place to host a customized birthday party.

“History and the work still left to do to make aviation a more inclusive environment is so much more than what we currently have,” said Fisher. “We hope that participants will want to learn more about women in their own communities as well who have been or are in aviation! If we can spark some level of drive and determination to share more women's stories, then we've done our job.”

The event will be held both in-person and via Zoom. While in-person tickets are no longer for sale, virtual tickets ($5) for the event will remain on sale until 4:00 on Friday. The program begins at 6:30. p.m.
Scroll to read more Arts Stories & Interviews articles
Join the Cleveland Scene Press Club