The members of Evanescence put the Christian-rock bashing behind them. 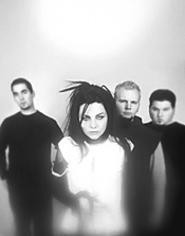 That little incident that happened with Evanescence last month was supposed to be a big deal. When guitarist Ben Moody spouted off in Entertainment Weekly about the band's Christian roots -- specifically, its reluctance to be labeled a Christian band -- Evanescence's debut album was pulled from Christian retail stores, where it had been a No. 1 seller.

But the anticipated backlash never really happened. In fact, the album, Fallen, went platinum, cementing the band's place as one of the year's left-field success stories.

"I'm not supposed to talk about it," singer Amy Lee says of the incident. "But I will tell you that we don't want to alienate anyone. The whole thing . . ." Silence. "Our music is for everyone, and we want anyone who likes our music to listen to it. No bad blood."

Lee and Moody met at a youth camp in Little Rock seven years ago. Soon, they were writing their own songs and gigging around the fledgling Arkansas scene. "We're very open-minded," she says. "We continually listen to different artists. We do whatever we want, even though no one else is doing it. We never thought, 'What's going to make us millionaires? What's going to make people buy our record?'"

They signed with Wind-Up Records, home to God-rockers Creed and 12 Stones, and recorded Fallen, a heavy mix of modern rock and goth sensibilities. The album's first single, "Bring Me to Life," went to No. 1 on the Modern Rock charts (buoyed by its appearance in the movie Daredevil), and the album has remained in the Top 10 for two months. "What's cool about our record is that it's the very vision we've had in our heads since the beginning," says Lee. "We were so shocked and excited when the record was finished, because it took us so long to get it from in our heads onto a CD. The album has been in our heads all along. There's not a thing I would change about it."

Then the Entertainment Weekly story hit, featuring Moody's observation, "We're actually high on the Christian charts, and I'm like 'What the fuck are we even doing there?'"

"When we read the article, we were like 'Ooh. We went a little too far,'" Lee says.Wind-Up's CEO issued an apology to its distributor, and the record was recalled from Christian stores. But that was the extent of the damage. Lee says it was no more than an overreaction by one faction in the industry. "I don't think [what we said] was anywhere near to the point of the reaction that's happened," she maintains.

Evanescence now prefers to let the music speak for itself, and whatever message listeners get from it is OK with Lee. "We love our fans. I don't care where you come from or who you are. Any interpretation is a good one."