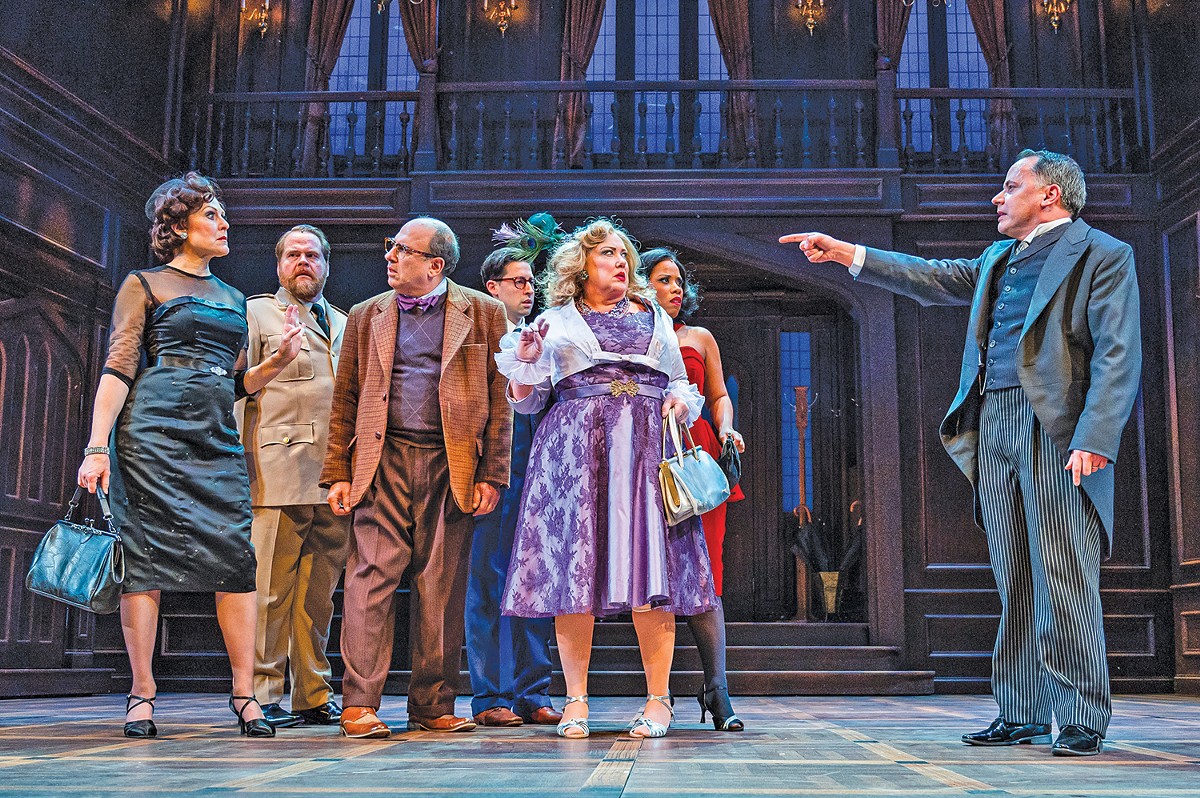 The colorful cast of "Clue," now at the Cleveland Play House. Photo by Ken Blaze

Through Feb. 23 at the Allen Theatre

In the America of 2020, it's hard to believe anyone would want to see a farce on stage. It would seem that the absurd (and terrifying) antics in our state legislature and in Washington, D.C., might be enough to sate even the most slapstick-hungry farce aficionado.

And yet, here we have Clue at the Cleveland Play House, a 90-minute play based on the screenplay by Jonathan Lynn for the eponymous 1985 flick, which itself was based on the board game. In that game, players try to accurately triangulate suspects, locations and murder weapons to suss out who killed a victim in a spooky old house (Colonel Mustard did it in the kitchen with a wrench, etc.).

Yes, you remember: That's the game that you up-ended when you were 10 years old, sending all the pieces flying and wailing, "It's not fair!" every time your mom won. Perhaps that's the reason why CPH inscribes the subtitle, "A new comedy," prominently on the cover of the program. Don't want anyone to think we're revisiting childhood trauma here.

As written by Sandy Rustin, with additional material by Hunter Foster and Eric Price, the script lays out a standard farce structure featuring a butler and French maid, switched identities, ridiculous deceptions, sight gags, slamming doors, and a sprint to a loony conclusion. It doesn't help that most of the gags are so far past corny they have decomposed into high fructose corn syrup: "Is there a ladies room?" "Oui, oui, Madame." "No, I just have to powder my nose.") To be sure, the elements are in place for a juicy farcical romp, and this tightly synchronized production often succeeds, albeit in fits and starts.

It begins with the butler Wadsworth welcoming the evening's house guests, none of whom know exactly why they've been invited, or by whom. The first misfire happens when there are references to the 1950's House on UnAmerican Activities hearings, chaired by the execrable Sen. Joseph McCarthy. It's not exactly a boffo premise on which to base this frothy entertainment, since the HUAC hearings were a political monstrosity that ruined many lives and careers.

On the plus side, that theme is mostly jettisoned as the energetic cast uses fast-twitch timing to lay out an ever-multiplying gaggle of plot points and misdirections. It seems the colorfully named visitors — the aforementioned Mustard, Mrs. White, Mr. Green, Mrs. Peacock, Prof. Plum, and Miss Scarlet — have all been invited to dinner by their serial blackmailer, the owner of the house who bears the comedically useful name of Mr. Boddy.

You see, each of the guests has committed a ghastly deed of one sort or another, and Mr. Boddy is there to make them pay. Shortly after Boddy gives each of the guests a different weapon as a gift (a fun party-favor idea; try it at your next soiree), his dead body is found. I won't trouble you with the profusion of Boddy/body puns that event inspires. Suffice to say, the hunt for the culprit is on.

Under the direction of Casey Hushion, there are ample gobs of frivolity to divert the audience. As Colonel Mustard, John Tracy Egan is as dim-witted a military stuffed shirt as you would want, launching his malaprops with the confidence of a man who knows nothing and is proud of it. And Alex Mandell is amusing as the ambiguously gay and somewhat mysterious Mr. Green. Some of the others, including White, Plum and Scarlet, have little to do, but the actors — respectively Donna English, Michael Kostroff, and Eleasha Gamble — handle their tasks well.

However, to make this material soar, a couple roles must be delivered with spectacular skill. And in this production, those two actors swing mightily but don't hit home runs. Mrs. Peacock is a daffy older woman with a penchant for booze. In short, it's a character crying out for the kind of over-the-top, in-your-face acting that makes a farce memorable. While she's quite funny at times, Kathy Fitzgerald doesn't show the full range of comedic colors that her character name implies, too often leaning on predictable schtick instead of creating something surprising and fresh.

In the linchpin role of Wadsworth, Mark Price starts off exceptionally well as he efficiently orchestrates the evening as the omniscient butler. But when he is called upon to present that staple of many farces, the retelling of the story from beginning to end at breakneck speed, he comes up a bit short. That is a juicy task that requires an actor who can sharply capture the essences of all the other characters in a nanosecond while keeping the narration flowing. Instead, Price employs only vague characterizations of the others and he doesn't totally exhaust himself and the audience in the process, as he should.

The proceedings are enlivened by Lee Savage's scenic design featuring hidden rooms that roll and swing out, then disappear as needed. And the lighting design by Ryan O'Gara helps keep the potentially confusing action trackable and understandable.

In truth, this Clue is essentially dinner theater without the dinner. If farce is supposed to be indulgent, the dessert course of all stage offerings, this production isn't exactly a chocolate-glazed Boston Cream Whoopie Pie. But it is a tasty little fruit compote.