'Come From Away' Serves as a Reminder People Don't Always Suck 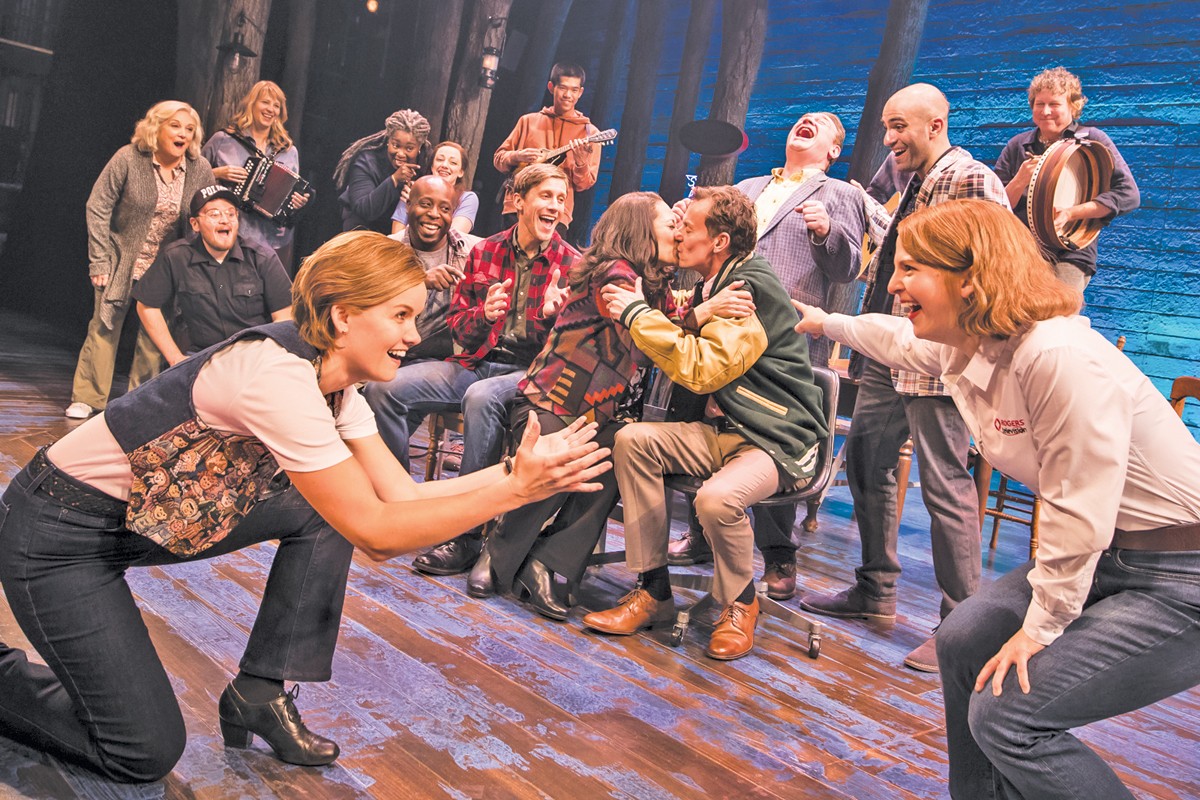 This past Fourth of July, I opened the paper, confirmed that this administration was still pursuing its policies of torture and mistreatment of immigrants, took down the American flag that flies at the end of the driveway, and spent the much of the rest of the day listening to the cast recording of Come From Away.

Sometimes, we just need a little hope ­— or at least a reminder that, as individuals, humankind doesn't always suck.

Possibly that's what the rafter-shaking ovation that followed last week's Playhouse Square opening of this Tony Award-winning musical signified. Based on an actual historic event, and artfully composed of myriad small stories of only slightly varnished humanity — not all of them, to its credit, flattering — Come From Away is about as affirming, affecting and entertaining a tale about our species' capacity for kindness as a jaded population could hope for.

With a book, music and lyrics by Tony and Grammy Award nominees Irene Sankoff and David Hein (both Canadians), Come From Away is built upon on a month-long series of interviews held in Gander, Newfoundland, in September 2011, the 10th anniversary of the day 38 international flights were grounded in the small Canadian town in the aftermath of the attacks of 9/11. Numerous flight crews, pilots and "come from aways" (a Newfoundland term for a visitor from beyond the island) returned for the occasion and, together with a local mix that included teachers, air traffic controllers, bus drivers, and the mayor, yielded up their memories of the week when nearly 7,000 travelers were stranded in the remote town.

What emerged was an intimate anthology of human experience — fear, sorrow, compassion, joy, humor and the boundless relief that comes from finding that we are not (always) alone — that somehow only seems sweeter for having been set, by music supervisor Ian Eisendrath, to a soundtrack of rousing Newfoundland-style music (which shares much in common with Celtic traditions) and choreographed to a dazzling fare-thee-well.

The resulting piece of theater had its world premiere engagements on the West Coast, at La Jolla Playhouse and Seattle Repertory Theatre, in 2015 and opened on Broadway in 2017. (A feature film is currently in the works.)

As a true ensemble piece, the entire story is delivered by 12 stalwart actors — a refreshing mix of ages and races — each of whom plays numerous roles. On Broadway, the seamless ease with which the performers transitioned from role to role earned high critical praise, and the touring company is no less adept. Even knowing this, in fact, it took me 40 minutes — nearly half the entire intermission-less performance time — to realize that Gander air traffic controller Doug was being played by the same actor (Chamblee Ferguson) who was giving us the awkward Britisher Nick — and this was without any but the most minimal of costume changes!

Not only does the ensemble nature of the musical lend itself to such actorly accomplishments, it also feels like a reminder of the theme: We are all in this together. And speaking of unifying symbolism, it may be worth noting that the repeated lyrical description of Newfoundland as an island "where the river meets the sea," could surely apply as well to Manhattan. And then there's scenic designer Beowulf Boritt's multipurpose set — basically, wooden chairs and tables on a turntable, set against a rough-hewn backdrop used to conjure everything from cargo holds to churches — which includes a "forest" of tall trees, two of which have been roughly severed in spooky recollection of the wounded Twin Towers.

Still, ensemble or not, certain performances and storylines tend to stand out. That includes the true story of Capt. Beverley Bass (Becky Gulsvig), the first female pilot for American Airlines and the commander of one of the planes grounded in Gander. Gulsvig's powerfully delivered solo, "Me and the Sky," not only charts her history as a leader, but ends with a brief, but moving, lament that captures the loss of American innocence that accompanied 9/11.

Other moving performances come from Nick Duckart as Ali, a renowned Egyptian chef and instant target of suspicion and mistreatment as a Muslim; he is equally convincing as Kevin J., the cynical half of gay couple "Kevin and Kevin." And tears flowed for Danielle K. Thomas, who plays distraught New Yorker Hannah, whose firefighter son is missing in the aftermath of the attacks.

If there is a spiritual high point to the show, it comes in the form of "Prayer," which begins as a hymn-like duet between Kevin T. (the more engaging half of "Kevin and Kevin," played by the ever-charming Andrew Samonsky) before expanding into a plea for peace among a chorus of Jewish, Muslim, Hindu and Christian passengers.

Lest this all sound unremittingly heavy, please be assured that Come From Away is anything but. In fact, there are plenty of opportunities for laughter built into the plot, not the least of which come with the physically comedic performances of James Earl Jones II, who gives us a highly suspicious city dweller perplexed — but eventually won over — by Gander's folksy hospitality, as well as the sexy Capt. Bristol, of Virgin Airlines, who dazzles one of the local gals with his Barry White-style charm (and has the voice, as you might guess, to pull it off).

A word of praise, too, for the tight, hard-rocking band under the direction of conductor, keyboardist, accordionist and harmonium player Cynthia Kortman Westphal. Armed with fiddle, guitars, Irish whistles, a bodhran, and Uilleann pipes, the musicians not only create evocative sonic backdrops but finally get a few moments of their own in the spotlight, at the end of the show, when their joyous performance puts a final fillip of fun on the evening's endeavors.

The American flag is once again flying at the end of the driveway. Like I said: Sometimes all we need is a little reason for hope.