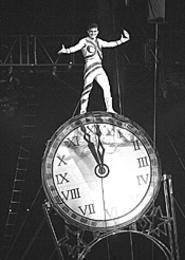 It takes more than eating cat food or farting in an elevator to earn a person the nickname "Crazy." That moniker requires some totally stupid shit -- like performing somersaults atop something called the Pendulum of Pandemonium or attempting motorcycle tricks in a 16-foot steel sphere while your wife fearfully cowers at the bottom of it. "I will do a lot of things other people won't do," boasts Crazy Wilson Dominguez, a member of the Ringling Bros. and Barnum & Bailey circus, which returns this week.

Dominguez is a fourth-generation big-top performer. And he says he's constantly searching for a stunt that's bigger, better, and, yes, crazier than the last one. "I look for something nobody else is doing," he says.

On Saturday, the Galileo Players will show you how your biology teachers could have lightened up those book-heavy lessons that you slept through in high school. Six years ago, the cast of comedians -- all veterans of Chicago's improv circuit -- set out to make petri dishes and periodic tables entertaining. The results include "Dead Man Working," which imagines life as a white blood cell, and "Jarfly," which blows up myths about telescopes being used as weapons of mass destruction from observation decks. "Science has often been daunting for students," says Fred Gluck, secretary of the Cleveland chapter of the American Institute of Chemical Engineers. "For wary students, [comedy] can stimulate interest and relieve concerns that science is a stuffy area of study." The Galileo Players make science fun from 2 to 3 p.m. at Cleveland State University's Center Auditorium, 2121 Euclid Avenue. Admission is free. Call 440-775-8300 for more information. -- Cris Glaser

Eric McGill doesn't have time for the pain. As director of the homegrown TV show Upcrack, he's been lanced in the groin with an arrow and shot with a paintball gun at close range, and he's jumped off a trampoline into a thorny shrub. "Who wouldn't laugh at a dumbass jumping into a briar bush?" he asks. The Jackass-style program takes a break from the agony for sketch-comedy segments and local band performances. But the stars are the stuntmen -- who burn their skin with cigars, smash their faces into car hoods, and eat animal feces. "This is very important," says McGill. "Do not try any of this crap at home." Upcrack airs at 8 p.m. Thursday on Adelphia Cable 21. -- Cris Glaser

In school, Amy Dana was a "student-government geek." She's now promoting Saturday's Get Out the Vote, a rally that includes DJs and meet-and-greets with Dennis Kucinich, Stephanie Tubbs Jones, and other local Democrats. "So many people I've talked to are completely disgusted with politicians," she says. "We want politicians to see that the majority of dance-music fans are responsible, civic-minded people." It starts at 8 p.m. at Modä, 1871 West 25th Street. Admission is a donation at the door; call 216-781-3805. -- Cris Glaser