Marvel Comics isn't going to give up Captain America without a fight. 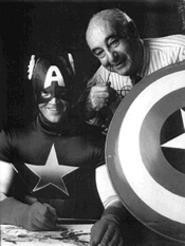 A family photo: Joe Simon gave up Captain America for adoption in 1939. Now, he wants his boy back.
Joe Simon doesn't read comic books anymore, and not because he's an 87-year-old man with far better ways to spend his time. The former and, perhaps, future comics writer and illustrator simply doesn't get them anymore; he doesn't know who they're for, what they're about, why most of them even exist. Back in his day, Simon and his colleagues, writers and artists plying their trade in smoky office buildings, knew their audience: 12-year-old boys. They knew what they wanted: good guys in tights beating up the bad guys, who most often looked a lot like a guy named Adolf. But now, Simon says from his one-room apartment in Manhattan, "comic books are for, I dunno, the masturbation generation." His laugh sounds like a train in the distance; his is a deep, New York voice that suggests a much younger man of sharp mind and sound body.

"They all look alike--little boys with big guns and little girls with big boobs," he says, and it's hard to tell if he's amused or disgusted. "If I were in the business today, I could find out who the audience was, but it's of no interest to me to get into that area. Not anymore."

There was, of course, a time when Simon loved comic books: They raised his children, bought his house, took care of his wife. And they made him a legend, at least among those who read and revere the much-maligned medium, this trash-can literature. A very long time ago, and for a very long time, Joe Simon made comic books, some of them among the best-known and most beloved in the medium's history: Young Romance, Newsboy Legion and The Boy Commandos, original copies of which sell among collectors for thousands of dollars. More important, he is the father of one of the most iconic figures in the ill-tended-to history of the medium: In 1939, Simon gave birth to the red-white-and-blue crimebuster known as Captain America, who would become among the most famous characters in Marvel Comics' stable of heroes.

Now, 62 years later, Simon wants his boy back--out of Marvel's clutches and into his own hands. There's but a single problem: Marvel, which has claimed ownership of the Captain America copyright since 1940, is not going to just turn over one of its most profitable properties without a fight. Sometime this summer, perhaps as early as June, Marvel Characters, Inc. vs. Joseph H. Simon will head into U.S. District Court in New York, with the victor claiming the copyright to Captain America, and the ramifications of the lawsuit are enormous. If Simon wins, it will open the floodgates for other artists and writers to reclaim characters long owned and exploited by comic-book publishers. That, Simon says, is precisely the point, which explains why he's a little surprised--and saddened--to discover he's fighting this battle without support from other creators who lost their children along the way.

"Christ, I'm doing this for my children and other creative people who should have their rights," Simon insists. "I'm not doing it for myself. I'm too old to be doing this for myself, but I'm not going to quit by any means. They've spent so much money on this. Marvel must have spent a million bucks on this. I think some people would get together and back me on this."

Simon notified Marvel of his intent to reclaim the Captain America copyright on December 6, 1999--just a few months after the heirs of Superman co-creator Jerry Siegel filed similar notice with DC Comics. Simon and Siegel's estate made their claims using a 1978 revision to U.S. copyright law, which says, in essence, that once a work's original 56-year copyright expires, the creator of a work (or his estate) has five years to regain the copyright. Two months after Simon filed his claim, Marvel filed suit against the legendary artist, claiming he has no rights at all to Captain America. According to Simon, the company never offered to negotiate a settlement.

"When the statute was changed in 1978, the whole point was to give people who may have sold their property for a cheap price the chance to take it back," says Simon's attorney Ross Charap. "The premise is you don't know what something's worth till the public tells you. Congress said, 'Let's do something for those who sold their goods at a rate far less than the value the public established for it over time.' Somebody who gave something up for very little 50, 60 years ago should be entitled to get some additional compensation for the great work he or she did."

But it's not as simple as that, because copyright law also says that a creator is not entitled to his creation if he did it as a "work for hire"--meaning, if Simon came up with Captain America while he was working for Marvel (which, in the 1930s, was called Timely Comics), it belongs to the company. Forever.

And that's where things get tricky, at least as far as Simon's issues are concerned. After all, he claims to have created Captain America all by his lonesome while he was working as a free-lancer for Timely. (At the time, Simon was also a staff editor at Victor Fox Publications, which was then one of the leading comics companies.) As he tells it, he came up with the idea of Captain America when he came up with the perfect villain, Adolf Hitler. According to Simon, he then took his initial character sketch to Timely's publisher Martin Goodman, who so liked the character he wanted Timely to publish it.

So, a year before the United States entered World War II, Captain America was laying knuckle to Hitler's jaw and crushing the Third Reich on the cover of Captain America Comics No. 1, which debuted December 20, 1940. The Cap was the so-called Sentinel of Liberty, a scrawny soldier who, thanks to a government experiment, became a punching patriot clad in an outfit that looked like something stitched together from Betsy Ross' leftover scraps. And Captain America was, for a short while, the best-selling superhero in the funny pages--bigger, even, than that other muscle-bound man in tights fighting for truth, justice and the American way. Father and son had precious little time together: Simon, with friend and illustrating partner Jack Kirby (another whose influence would smear across the decades), worked on only 10 issues of Captain America Comics. They would leave Timely after a dispute over royalties with Goodman.

But myriad comics history books credit the creation of Captain America to both Simon and Kirby, who were to comics, from the '30s until the '60s, what Rodgers and Hammerstein were to the American musical--as inseparable as they were influential. Simon insists he brought in Kirby after he'd sketched out Captain America and outlined the first two stories. He says he gave Kirby "co-creator" credit because they were friends...and because he didn't know any better; it was a Depression, he shrugs, and he was just happy to have the work. Kirby, who died in 1994, often said he and Simon created Cap together. Marvel also claims, in legal documents, that Goodman likewise had a hand in the character's origins, something Simon vehemently disputes.

"Anyone who wanted a byline from me, they got one," he says. "It didn't matter. Now when it's a legal thing, it suddenly becomes important. You can't go back 50 years and say, 'Here's an explanation for this.' As far as Martin Goodman is concerned, and this is something I am just pulling out of a hat, but he was in business for 50 years, and no one gave him credit for creating anything."

But even if it were possible to prove, beyond a doubt, that Simon was Cap's only creator, Marvel still insists he has no claim to the copyright because, according to legal documents filed in February 2000, "Captain America was conceived and created...at the insistence and expense of Timely Publications." Marvel claims it was a work for hire, meaning Simon isn't allowed to any protection under U.S. copyright law--even if he was Captain America's only father. But Charap argues that there's no way Simon could have been a Timely employee, because the company didn't have any in 1939.

"Everything was jobbed out," says the attorney. "The key is between the time Joe first met with Martin Goodman and when he said, 'Let's do it,' he already did the first two stories in their entirety, in the sense that he had blocked them out, rounded them out and done the story outlines and put in some of the script. He was prepared to sell the book to anyone who wanted it."

This is not the first time Simon's tried to recapture Captain America's copyright: In 1966 and 1967, just as the first 28-year term of copyright was expiring, he filed suits in New York courts against Goodman and others, claiming to be the sole author of Captain America. Simon sought a judgment declaring that he alone had the right to renew the character's copyright; he also insisted he was entitled to royalties and other damages from Marvel's use of his character.

Simon retained a father-and-son team with no prior intellectual property experience. Marvel countered with one of the leading copyright firms in the country, and on November 20, 1969, Simon relented and signed a settlement agreement that said "all of his work on [Captain America] was done as an employee for hire of the Goodmans." As part of the deal, he also would receive an undisclosed amount from Marvel. Marvel's attorneys point to that document as proof Simon long ago relinquished his control to the copyright.

"The only thing I can say on the record is to direct you to the facts set forth in our complaint," says Daniel Fleischer, one of Marvel's lawyers, "which point to an unequivocal acknowledgement by an intelligent man that the work was created as a work for hire." Charap insists Simon signed the agreement only because he could no longer afford to fight Marvel in court.

Fact is, the whole story has become sordid and sad: Marvel, still reeling from its recent bankruptcy, is spending a small fortune--again--to go into battle with a man who gave it one of its most enduring characters. And all Simon wants is to, once more, control the destiny of his creation. He's an old man trying to rectify mistakes he made when he was just a kid. And if he has to wage war on Marvel, if not the entire comic-book industry, then fine. Whatever it takes.

"I was taken advantage of from the beginning," Simon says. "I was 24 years old, and I was stupid. Martin was surrounded by a lot of legal people who had nothing to do but see he got every advantage. He put the copyright in his name, and I think they're still doing the same thing today. The business is going to hell in the first place, but the characters are more valuable than ever. So, we'll do the best we can."